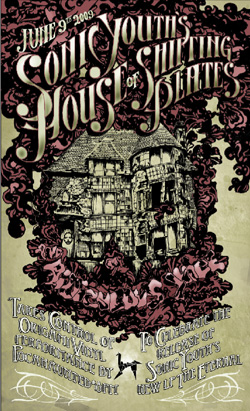 As part of the takeover, Sonic Youth has designed and chosen everything from the storefront to the "staff music picks," and tonight's event will include live performances by two hand-selected bands, Pocahaunted and Shiloe. In addition, exclusive Thurston Moore vinyl, limited edition artwork and even free Sonic Youth-inspired Two Boots pizza will be a part of the festivities. Last Saturday, LAist caught up with Schield to talk about Origami Vinyl's first two months in business and tonight's Sonic Youth extravaganza.

LAist: We first spoke before the opening of the store. What have the last two months been like?

Neil Schield: Business has been incredible and it's actually exceeded our expectations. One of the big pleasant surprises has been how many young people come in here and buy records to start their own collections.

Around three weeks ago, this 17-year-old was just looking around in the store and asking me questions about stuff. A week later, he came in with his mom and she turned to him and asked, "Are you sure that's what you want?" and he nodded. So she bought her son the portable record player we sell, and it was his high school graduation present. I was so blown away. For me, it was the most amazing purchase so far—selling this 17-year-old his first record player and introducing him to vinyl.

I think one of the most rewarding things over the last couple months has been the appreciation by everyone who walks in here. Even people who don't own record players have said things like, "Thank you so much for being here" or "we really appreciate that you're in the neighborhood." That's even more rewarding than if they'd purchased a bunch of records.

How have your Tuesday record club nights at El Prado been going?

It's been packed! Catherine, who runs El Prado, has had to add another bartender on Tuesday nights because one person wasn't enough. For us, the response has been so positive. We let six people sign up to share a couple songs each week, and we're already booked through the end of the month. It's been pretty fun. 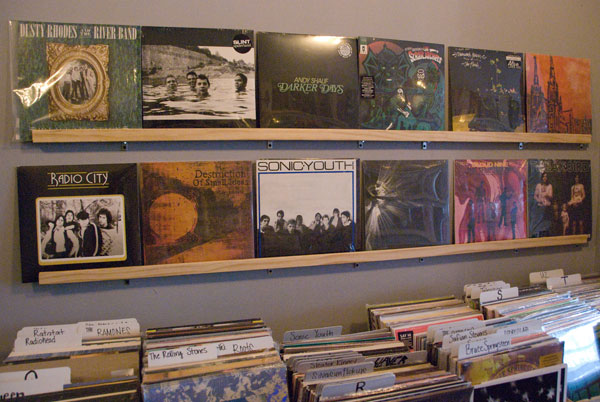 You've already had some amazing live performances in the store. What's been one of your favorites?

For me, one of the most memorable was this band called Restavrant, a local band by way of Texas. I had heard a couple of their songs here and there and they ended up playing the store on Record Store Day. They're sort of this back-alley blues band—rough, rugged and kind of dirty, and the guy's got the most soulful voice. It just blew me away. 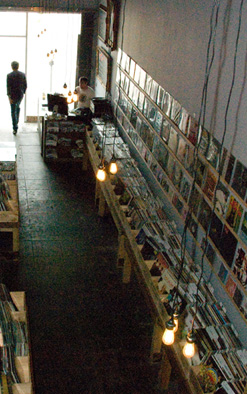 Origami Vinyl / Photo by Michele Reverte (taken prior to the Sonic Youth takeover)
I've already seen a number of stories about Origami in the newspaper and on TV. How has the media attention impacted your store?

Since you and I talked, we were on the front page of the Los Angeles Times. We still get people who drive here all the way from, like, Pomona as a result of that. Then we were on NBC in this 30-second thing, and a week later, CBS news came and they did a whole five-minute spot on the store and vinyl records in general. It's exposed us to some new audiences. All we were really trying to do was be the local record store, but it's spread beyond that and it's amazing.

KCRW, KXLU and The Sound have been really supportive of the store. And Carson Daly's producer just contacted me, and Carson wants to shoot his show here one night this week. So now it's going to go national, which is a whole other thing. All this stuff is organically happening, because nothing's really changed as far as promotion. It's just me sending out e-mails to our list.

How did the Sonic Youth event come about?

Well, I often order vinyl from Matador, so I talk to them quite a bit, and one day they told me, "Hey, we want to do a listening party for the new Sonic Youth record." My response was, "You know, listening parties are cool, but they're not that much of an event because people can go online and listen to the record beforehand. Would you be interested in doing something out of the box?"

That piqued their interest. I think they're used to record stores not being very progressive. So I had this idea of letting the band take over the store and letting them curate everything, so it's their staff picks and their theme and their design. The dream was to maybe have them play a set or work the register for a few minutes, but unfortunately, that didn't work with their schedule. But they started to run with it and suggested that their friends Pocahaunted and Shiloe play.

The theme of the store for the day, which the band chose, is "Sonic Youth's House of Shifting Plates and Ridiculous Juice." 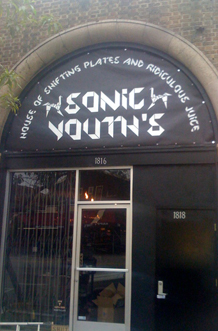 Origami's Sonic Youth storefront / Photo by Neil Schield
Will there be any ridiculous juice on hand?

I don't know if it'll be ridiculous, but we will have beer. (laughs)

Is it true that there will be free Two Boots pizza as well?

Well, it turns out that Phil, the owner of Two Boots Pizza, has been friends with Lee Ranaldo of Sonic Youth for years. Two Boots has been so supportive of everything we've been doing, and Phil is going to design a pizza called The Eternal—and it's going to resemble the album cover! So there'll be free pizza for everyone who comes to the event.

Will you have any exclusive items for sale?

Yes, I got in touch with a local label, Deathbomb Arc, and they've put out some really cool Thurston Moore stuff. So I had talked to Brian at Deathbomb and told him about the event and asked him what he had available. He told me, "Actually, I have these 13 white-label test pressings of some Thurston Moore records that are just sitting here." He also said he'd bring the artist who did the original cover art, and she'll hand design each of the records. So we'll have these for sale for the first 13 people who want to buy them.

We'll also have some original prints. My friend Seizer is an artist and we've always loved rock art posters. We'd been talking about possibly doing some silkscreen stuff for some of Origami's in-store events. We decided that this would be the perfect event to kick it off with, so he listened to a bunch of Sonic Youth, Pocahaunted and Shiloe, then drew this [see the top of this interview for the image] by hand.

Unfortunately, the silkscreening takes a little longer than I thought, so we've got a really high-end printed poster that we're going to have on display, and then people will be able to pre-order them during the event. We're only producing 50, so it'll be super-limited! 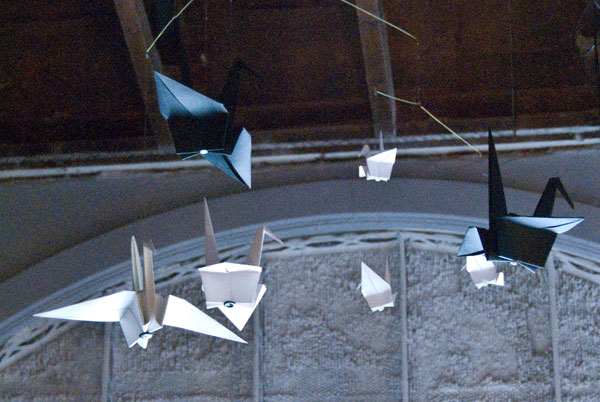