Celebrity Clientele Pressure Nobu To Cut Out the Bluefin Tuna 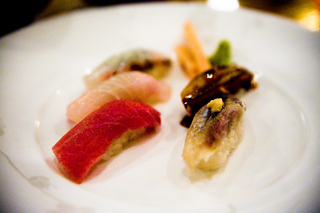 Sushi at Matsuhisa in Beverly Hills (Photo by star5112 via Flickr)
The Nobu chain of sushi eateries is global in its reach, and undeniable in its popularity, particularly among trendy Hollywood-types. But what's also trendy is eating what isn't on the verge of extinction, which is what is prompting some celebs to put the screws to Nobu to stop slicing up bluefin tuna.

Thirty-one stars including Sting, Elle Macpherson, Woody Harrelson, Charlize Theron and Sienna Miller have written a letter to the owner asking him to take it off the menu so that they can "dine with a clear conscience." Under pressure, the London branches of the sushi bar have agreed to put a note on the menu informing patrons that the fish is endangered.

The high-profile letter-writers hope that the restaurant's high profile will set the bar for other sushi and seafood restaurants world-wide to take a similar stance. Recently, Food Network guru Alton Brown has said he won't set foot in any restaurant serving up bluefin tuna, either, joining a legion of chefs who feel likewise. In New York recently, Greenpeace activists have set up protests outside Nobu.

Although the London location has agreed to the footnote, the three Los Angeles-area locations (Beverly Hills, Malibu, and West Los Angeles) have not made any changes.

In fact, Nobu's noticeable lack of changes seems to be contrary to their new partnership with LG appliances, touting their use of energy efficient refrigerators. In response to the bluefin celebrity request, Nobu's reps seem to stand on the grounds of traditions: "The owner has said that the sushi made of bluefin tuna is 'a cultural institution in Japan and there is still an enormous demand for this delicacy at all our restaurants.'"