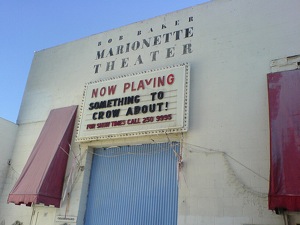 Photo by Xurbie via Flickr
L.A.'s master of puppets officially became a part of history as the Bob Baker Marionette Theatre was declared an historic cultural monument by the city of Los Angeles yesterday.

"At age 85, he’s still the star of his company," Steve Meltzer, president of the L.A. Guild of Puppetry, told the LA Times. "There are performances where his presence is requested.”

The Vernacular-style theatre, originally built in the early 1950s as a special effects workshop, was purchased by Bob Baker and Alton Wood in 1961 as a venue for live puppet shows and as a "permanent showcase for hand-crafted marionettes," according to the L.A. Dept. of City Planning's historical monument recommendation report. Their report concluded the "property successfully meets...criteria in reflecting 'the broad cultural, economic or social history...of puppeteering in Los Angeles."

There's nothing very notable about the architecture of the theater's cinder-block building that sits near Glendale Boulevard and First & Second Streets," writes EastsiderLA. "What matters is its association with Baker," a 65-year veteran of the puppetry industry. The theater, which has entertained many for almost 50 years and may be the longest-running venue of its kind, is home to over 3,000 hand-made marionettes and the non-profit organization, Academy of Puppetry and Allied Arts.