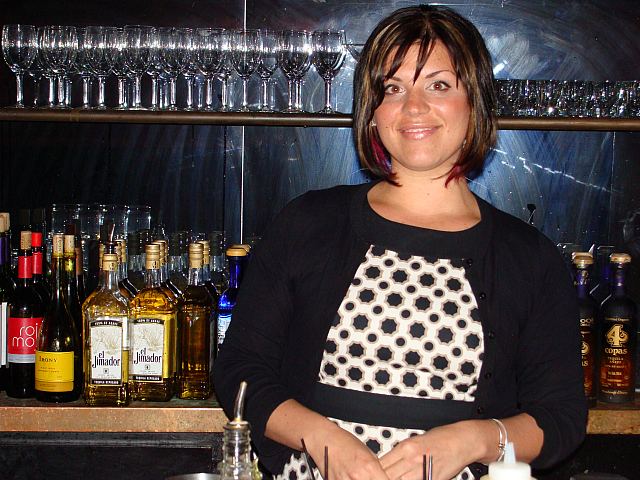 Christine D'Abrosca serves as the Beverage Director at Malo in Silverlake. | Photo by Tim Hammer/LAist

Christine serves as beverage director at Malo in Silver Lake, which tonight from 7-10pm hosts the Ultra Premium Tequilla Show featuring a tequila tasting, free food and a DJ for the "cheap ass price" of $15. Some of the tequilas available for tasting will include 4 Copas 100% Organic, Partida, Maestro Dobel, Comisario, Casa Noble, Hacienda de Chihuahua Sotel and Tequila Ocho. Tickets for tonight are available here.

Christine, who's celebrating her birthday today, sat down with LAist before opening the doors at the swanky Sunset Blvd Latin eatery to educate us on tequila, "some people only know the P-word (Patron) or Cuervo," tell us where she likes to go when she's not busy serving up drinks and much more.

1) How did you get your start in mixology and bartending?
I started bartending in college because I needed to make money. I graduated, got into the real world and then decided to go back to school. When I went back to school, I started bartending again to pay the bills. That's when I started working under a man by the name of Steve Wilson, who is also known as "The Wine Geek." His program is the one that trained me in the way of mixology; using fresh juices, using better quality ingredients, working with your kitchen to make sure that what you're producing was cohesion in that it was something that worked and balanced each other out at the end of the day. You can pair cocktails with food, just as much as you could pair wine with food because it all played off of the same flavors. And it was a lot about seasonality, that's another big thing. Those are the things I really enjoy. I grew up in a family that cooked a lot so it only made sense, and you could use that in the beverage world.

2) What would you say is the difference between mixology and bartending?
For me, mixology is my study. It's my study of learning to be a better bartender. To know the history and the philosophy and that sort of thing. Bartending, for me, is the application of that study. That's how I attribute it.

3) How did you end up here at Malo?
I actually moved to Los Angeles two years ago when my fiance' took a sous chef position at Craft. We were actually living in Alaska helping some friends out. I was very happily packed and ready to move to Los Angeles. I actually started working for Cedd Moses at Seven Grand. That was amazing. I was the only girl bartender. Whatever I didn't know, I'm pretty sure I learned while I was there. I still have so much more to learn though.

A couple of the guys knew that the people over here were hiring and thought I'd be the perfect match. And that's how I ended up here and have been here ever since.

4a) What's the best tequila for sipping and what's the best for making a margarita?
The best for sipping, if you have deep pockets, the Herradura Seleccíon Suprema is always fun to sip on. It's actually a real nice tequila. It's one of my favorites because it was the first time that I was ever introduced to an extra añejo at that time it wasn't considered an extra añejo because that wasn't a category. It definitely was more of a cognac-based tequila and I liked cognac. It wasn't exactly cognac based, but more in that direction where it kind of reminded me more of that. When I liked cognac, I liked to be able to sit and sip. This was the first tequila I actually sat down and thought 'Oh you could sip this stuff.' You don't need to have it in margarita. It doesn't need to be shot. It's something that should be enjoyed, there's a lot of love and quality into it.

The Herradura Silver though, is by far one of my favorites to mix with it. It has a lot of attributes where you mix with it, it doesn't overpower what I'm mixing with. It also doesn't get lost. There are some tequilas that I mix with that no matter how I try to balance it, I have to be cautious about what other ingredients I'm using because it could potentially lose that agave flavor. With Herradura Silver, I never lose that agave flavor. We sell a ton of it here.

4b) What are some other recipes with tequila in it that you enjoy?
I actually like the good old Bloody Maria. It's just one of those things. It was actually the first time I ever had anything with tomato juice in it. My dad used to drink them, so he said try it, and I thought it was going to be disgusting but I actually enjoyed it. Being from the East Coast, they put horse radish in their Bloody Mary, which they don't do in California. I haven't fully adjusted to that, but I'll deal with it.

The El Diablo, which we make it here is another one. We use our own ginger juice and agave nectar to make a ginger agave. We use Herradura, lime juice and a little soda water. We serve that at brunch. People really seem to enjoy that. It's really refreshing.

5) Are there clear cut differences between the bars on the East Coast and the West Coast?
I would say yes. I definitely feel that the west coast uses their surroundings and uses their farms. You definitely have the freshest ingredients that you can play with here. I absolutely go to the farmer's market every Wednesday, Saturday and Sunday. I try to bring stuff that in to use. To ship it in, yeah it's fresh but you know but to drive there and get it yourself is nice. A lot of the bars here utilize that. They have that opportunity to use fresher ingredients, and they take advantage of it.

I find that the cocktails that are coming out of New York and Boston, which are amazing cocktails, are more classic style. They are really into punches. A lot of their cocktails are stirred. Out here, you'll find cocktails that have bell peppers in them and strawberries and jalapenos and that sort of thing.

It can't be overly sweet. It has a good balance to it. Makes your mouth water a little, makes you want another sip. It doesn't burn going down. I remember my first shot of tequila in college and it's not a memory I ever really want to have again.

7) Where do you like to go when you aren't working? Do you find it difficult to have a good time when you go out to another bar or restaurant?
That's a tough one for me sometimes. My fiance' is sous chef at Craft. We go out, but it's not easy for us sometimes. Some of my favorite places can be dive bars. That's just because I don't have to think. You sit down and you're just having a conversation and a cocktail and it doesn't make a difference.

I love going to the Hungry Cat. What I love about them is that they have some really unique items. They'll do drinks with squash and pumpkin. They'll do drinks with whatever the chef is cooking with, whatever they get from the Farmer's Market. It's really interesting to see the cocktails that they come up with. They do classics and originals. They have these big buckets of fresh fruits sitting at the bar. I think that's amazing. They take it very seriously.

Copa d' Oro in Santa Monica is another place that I really enjoy going to. There's a really cool vibe. Vincenzo (Marianella) is a really great guy, his bartenders are well trained. Most importantly, they're consistent. That is huge. You can have one favorite bartender at a bar, but trying to get consistently good cocktails from the same place is just as important as having one favorite bartender. It's nice to see a collaboration of really good bartenders.