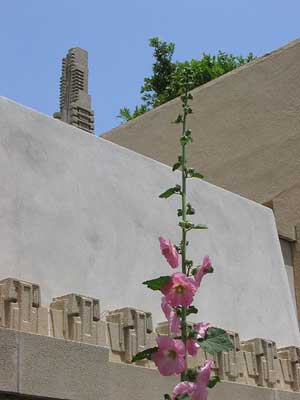 Photo by erinpk, via Flickr.
Hollyhock House is a wonder wrought by Frank Lloyd Wright for our fair city. Though old Frank was a dick in person, he was unquestionably one of the more prominent architects of the twentieth century. Usually associated with his midwestern "Prairie Houses" (very influential in the arts and crafts movement, they were extended, low buildings with sloping roofs and deep terraces and overhangs. These, incidentally, were also an early example of "open plan" homes, the obsession that has driven many a Los Angeleno to alter fine old homes for the worse), or his later usonic homes which made middle class housing out of geometric shapes, he also believed in organic homes, that were in harmony with the land and other natural features that surrounded them.

Hollyhock House was the first LA home designed by Wright. He was commissioned by unconventional oil heiress, Aline Barnsdall in Chicago, where she was studying the American stage. After a trip to California in 1915, she decided to make her residence here in order to develop arts and theater. She bought 11 acres between Sunset and Hollywood Boulevards, just west of Vermont. She named it after her favorite flower, a motif repeated throughout the structure. It was built between 1919 and 1923. Wright was spending most of his time in Tokyo, building the Imperial Hotel (one of the few structures to survive the earthquake of 1923) and left the construction under the watchful eye of his son, Lloyd Wright and his apprentice, Rudolph Schindler. The house was supposed to be a private residence in the center of an arts park -- there were plans for theaters, dormitories and studios for artists and actors, shops and two guest houses. Due to artistic and financial troubles (Wright and Barnsdall, both strong willed, disagreed), only the main residence and the guest houses were built. 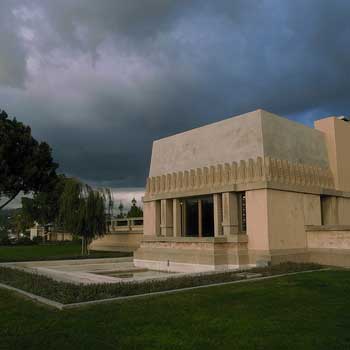 Photo by le, via flickr.
In 1927, after living there for four years, Aline Barnsdall gave the house and its surrounding acreage to the city of Los Angeles for use as an "art park." After years being leased to various organizations, (including a stint in 1946 as a USO tavern) it went through two renovations, one in 1974 and another in 1989, which restored the original Wright designed furniture and color scheme. It's now the centerpiece of Barnsdall Park, surrounded by galleries and a theater.

Like all Wright houses in Los Angeles, Hollyhock House is a mystery. There's a vast, ancient feeling to it, as a structure, it lies open to the elements, with its broad, flat roofs, its windows are small and deep, keeping the heat of the sun out But inside, under deep overhangs are walls of windows leading out to fountains and gardens. You can feel the Mayan and Aztec influences, in the squareness of the structures and the geometric nature of the motifs.

Wright was attempting to find a style that fit the landscape of Southern California. He called these "Califonia Romanza" (romanza is a musical term, which means "freedom to make ones own form.") Though they may look like reinforced concrete, the bearing walls are actually hollow, then covered in terra cotta tile. The decorative effects are from a kind of proto-concrete poured into molds.

Virginia Kazor, the city's historic curator for the house, told The San Diego Union-Tribune, "I've been in this house 100 times, and I'm still seeing things I've never seen before."