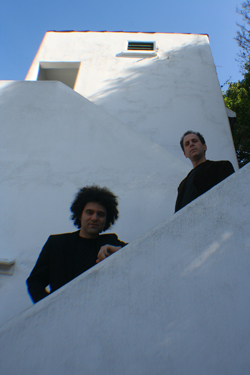 Peter Salett and Larry Goldings
Last year, LAist sat down with singer/songwriter/film composer Peter Salett, to discuss his solo albums and his scoring work on films such as Forgetting Sarah Marshall and Role Models. Salett's new project is a collaboration with celebrated jazz musician Larry Goldings, who has released 10 solo records and worked with everyone from Madeleine Peyroux to James Taylor.

The Salett/Goldings partnership got a kick-start when they met up one day to "maybe write a song," and it quickly turned into a full record. Their upcoming Carriage House Sessions album is a collection of originals with a few American songbook selections sprinkled throughout the record. Tonight, Salett and Goldings will begin a weekly residency in Largo at the Coronet's Little Room. LAist caught up with Salett earlier today for a mini interview about this new collaboration.

What does Larry bring to the table that makes this such a great partnership?

Larry is so much fun to work with for many reasons—first, he's just an incredible player, with a tremendous feel for how to build chords organically, so he's playing something slightly different every time. He's also got interesting melodic ideas, and with this record, we really wanted to try a few different genres, and also just have fun. We just connected harmonically so that it was relatively easy to write a bunch of songs in different genres in a short period of time.

Is the album available for purchase yet?

Not yet! We've just begun the process of figuring out how we'll get the record out to the general public—you can listen to some of the tunes on our myspace page for now.

What is it about the Little Room that led you to choose it for this residency?

The Little Room, and Largo in general, asks for a lot of focus from the audience, and we both thought performing this music, as a duet, would really benefit from that environment

What can people expect at the show?

We'll do this first one as a duo, and for the next couple we're going to have some great special guests sit in. What's fun (and challenging) for me is that I'm not playing anything, just singing—but again, with Larry at piano, sometimes the best thing to do is just sit back and listen!

Don't miss Peter Salett and Larry Goldings tonight (May 26) in Largo at the Coronet's Little Room. Doors will open at 9 p.m. and the show will begin at 9:30. Tickets are $15, and will be available for purchase at the venue. And if you can't make it tonight, the Salett/Goldings residency will continue in the Little Room on June 2 and 10.