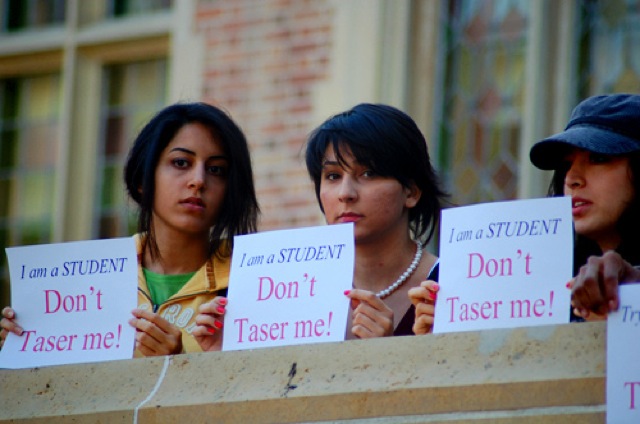 On Friday, UCLA announced a settlement with the student who was tasered over and over and over again back in November 2006. It was captured on video and YouTubed in what we still think is one of the most disgusting police videos ever (embedded below if you care to watch).

Basically, 23-year-old senior Mostafa Tabatabainejad was studying in Powell Library when UC Police were making an 11 p.m. routine check of everyone, making sure those continuing to stay were students at that point forward in the night. When Tabatabainejad was asked for his ID, he refused, later admitting he thought he was being singled out for his Middle Eastern appearance, according to the LA Times. When officers tried to escort him out, he went limp, which prompted officers to ask him to walk or be tasered. The latter happened multiple times.

UCLA announced last Friday, along with the settlement, that the incident was deemed within department policy (funny enough, the taser-happy officer was one of the reasons the police carried tasers in the first place). However, that policy has now been improved, including a ban on taser use when dealing with passive resistance.

The incident prompted a protest (video) and elicited responses from USC and Stanford's school newspapers. Tabatabainejad was allowed to finish his degree.

"The two parties will have no further comment on the incident or the settlement," a UCLA press release said.