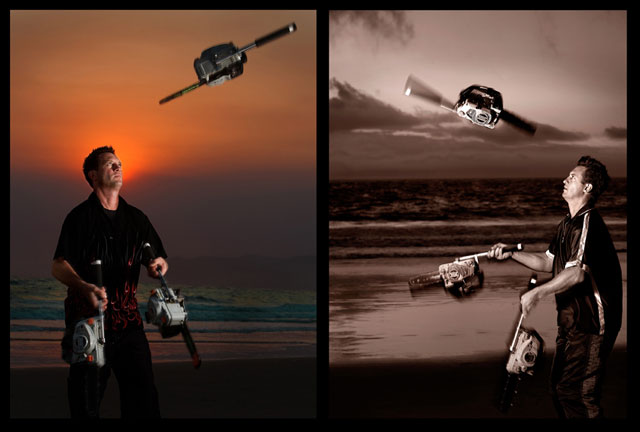 Chad juggles chainsaws for a living. It wasn't always chainsaws though, the Santa Monica native got his start juggling plungers on the boardwalk of Venice Beach at the age of 13. A Guinness World Record holder, Chad's brand of "Extreme Comedy" has been seen on nearly every variety television show, including "The Tonight Show with Jay Leno" and "Last Call with Carson Daly." The juggler has also made appearances on the big screen including Spider-Man 3 and Crocodile Dundee in Los Angeles. Chad has also directed a documentary film titled Buskers: For Love or Money that goes deep inside the hidden world of street performers. When Chad isn't taking his show on the road to colleges and cruise ships, he's enjoying his time at home with his family in Venice Beach, the place where he first made a name for himself.

Thanks to the help of Rich Wysockey and Marty Poole, the photographer and writer of Venice Beach Heart & Soul: 30 Years of Street Performing, LAist had the chance to speak with Chad about his time on the boardwalk, the life of a street performer and how exactly he began juggling chainsaws.

1) You got started at age 13. How did the other street performers take to this kid coming in on their territory?
Not well. There was definitely a pecking order down there. It's different now, because of the permit system. But before that system, definitely the more established performers had the regular spots. When I came in I couldn't get a good spot, I just had to make due with whatever spot I could get. Everyone was nice and all but it was understood that you couldn't get a good spot until you've been there a while and you got good. All of the performers were really nice but I had to make due with a lousy spot.

2) How often do you go back to Venice Beach to perform?
I don't perform there anymore. I was going back once a year to perform for a few years. There was an event, The Venice Summer Showcase, that I would emcee. They didn't have it last year, and I haven't heard any talk of it happening this year, so they might have lost the funding for the event. I don't know. I haven't performed on the boardwalk regularly for the last few years. I go down to Venice Beach quite a bit since I live in the area, but it's been a while since I last performed there.

3) What drew you to Venice Beach?
What I thought was so great about Venice Beach, which has now sort of been lost, was just that you can do anything. You didn't need a permit, you didn't need to audition. You didn't need to do any of that. You could just show up, grab a spot and perform or do whatever you wanted to do. I thought that that was pretty cool. I don't think there's too many places in the world where that happens. I just love how crazy it was down there, and if I worked hard enough I could make a living down there.

4) You started with plungers and are now juggling chainsaws. What came in between? Take us through the progression.
I only juggled plungers out of necessity because juggling clubs are pretty expensive. Toilet plungers happened to be weighted pretty well for juggling. You just cut a couple inches off of the handles and they work well.

Of course, people wanted to see you do something a little more dangerous so I went to knives. I got the knives from the army surplus store. Then I went to machetes. People liked that. Then I went to hatchets. People were into the hatchets but I had to step up. So I went to torches.

Torches were a part of my act for many years down on the boardwalk. For many years on Venice Beach, people loved watching me juggle torches.

The next step, pretty much was the chainsaws. For a couple years, I juggled one chainsaw with two balls. I had to get a chainsaw in my act, but it took a little bit before I could work my way up to three chainsaws.

I was practicing in a public park. Someone must have called the cops on me, they must have said 'There's some crazy guy down here with a chainsaw.'

The cops came over to me and determined I wasn't doing anything illegal. They actually thought it was cool so they watched me and wanted to see me do it. I finally got a few throws in and just kept practicing. Once I got up the nerve to turn it on, I was in good shape.

After 10 days of practicing juggling chainsaws, I found out that they never intended for the chainsaw to be running during the commercial - insurance issues.

Knock on wood, I haven't really hurt myself to a serious degree since I've begun juggling the chainsaws.

5) You've gone on to do TV, commercials and cruise ships. Was that your plan when you started out as a performer on the boardwalk on Venice Beach?
No really. In the beginning it was because I enjoyed juggling. Then I guess I saw other street performers making some money. I was thinking maybe I can make a couple extra bucks.

By the time I got out of high school I was already making pretty good money and I was being offered to perform on cruise ships. I had Venice Beach pretty wired to where I only needed to work weekends, as long as I could get in five or six shows on Saturdays and Sundays. I could make enough money to get by. Throw in the money I was getting from the cruise ships and pretty soon I was making a living.

In the beginning I wasn't thinking I could make a job out of this. Eventually I started making more money, and more importantly I was really enjoying performing. I loved juggling when I was younger. I thought, if I could make enough money doing this as a job I'd be a very happy guy. Incredibly enough, it worked out.

6) When I interviewed Marty and Rich about the book, they were telling me that it was tough at first to get the performers on board with their project because people approach the street performers all the time with different opportunities. What were some opportunities that were brought to you while you were performing on the boardwalk?
One thing that would happen a lot down there is people would try to hire you to do a party. They think that since you're a street performer that you're not making any money. Don't get me wrong we're not rich. Someone would come up to you and ask if you can perform at their party or function, and you ask them how much they can you pay you. They'll say like $50 and I'd respond by saying, 'No, I charge $500.' They'd say '500! But you're just a street performer.'

It's funny. People see all the dollar bills going in to the hat, but they don't put it together that this is your job.

Certain people think that they can take advantage of you. I remember back in the early 90s a guy from Houston came over to me and said, 'Did you know that there's a video with your act on it that they're selling in video stores in Texas?' It was funny because I never gave my permission, I never signed a release for that video. I've never seen the video, still to this day, but like I said I never gave the guy my permission to do that.

That kind of thing happens often. People think that you're just a street performer so they can take advantage of you. They'll take your picture or record you without even needing to ask for your permission to do something with it. I know that there's a postcard for Venice Beach with my picture on it without anyone asking me for my permission.

You start getting used to people taking advantage of you. You get a little protective of your image and your act, because this is my job and I'd like to get paid.

On the other hand though, I also definitely got a lot of job offers thanks to the boardwalk. A casting director who saw me performing down in Venice Beach asked me to audition for the sequel to the movie Hot Dogs, the comedy about skiing. I didn't get a part in Hot Dogs 2, but thanks to that casting director brought me in for more stuff and I started taking acting classes, eventually I was getting commercials and such. I owe all that to my time on the boardwalk.

7) Who do you think is the best street performer you've ever seen in Venice Beach?
My number one favorite act is Tony Vera, "The Fireman." I've seen him perform so many times. If we're performing in the same place together, a lot of other performers I've seen perform 20 to 50 times so I may not feel the need to watch them again. But with Tony, I'll definitely watch him. He's just so funny, and he improvises and comes up with new stuff on the spot. I just get a big kick out of him.

Some of the other guys I liked when I was down on the boardwalk aren't there anymore. They've either gone on to greener pastures or just because they didn't want to deal with the permit system.

There was a great comedian named Michael Colyar who got started down there. He was on Def Comedy Jam, he had a Showtime special and was on BET. He went on to do some great things. When I was a kid performing on Venice Beach, he was definitely an inspiration to me. I was thinking, I wish I could some day be as good as him.

Harry Perry is another great performer. He will not give up. I bet you he's been down there for 30 years. He will not let anything stop him.

For more info on "Mad" Chad Taylor check out his Web site, madchadtaylor.com.