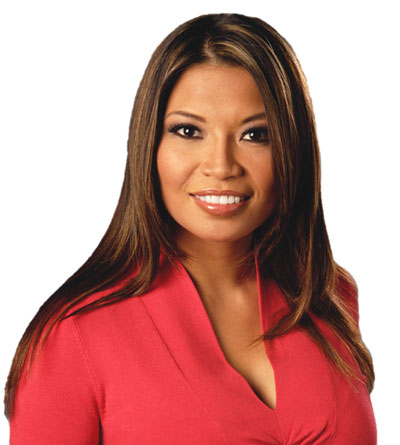 NBC4 Weathercaster Elita Loreska | Photo courtesy of NBC4
LA has a diverse cast of characters. Whether it's the characters with stirring stories or interesting occupations or the people who are just simply characters, this town has them all. In an effort to get to know some of those characters a little better, we've created "Seven Questions with..." If you have a suggestion for a future Seven Questions subject send us an email.

Our latest subject is Elita Loresca.

You've seen Elita standing in front of the map providing the people of Los Angeles with weather forecasts since 2007 on NBC4's morning and mid-day newscasts "Today in LA" and the "Midday Report." Elita, a native of the Philippines who moved to LA when she was just 10 months old, left behind the hurricanes of Miami, where she was a weathercaster for the top-rated morning and noon newscasts since August 2004 - WSVN (FOX) for the chance to come back home. A Cal-State Fullerton graduate, Elita is very active in charity work including Habitat for Humanity, American Heart Association and SIPA.

Elita, who admits to reading LAist, took some time out of her busy morning to speak with us about coming home to LA, her favorite NBA team (hint: it's not the Lakers), rain and her FHM photo spread.

1) What were you thinking when the opportunity came along to leave Miami and come back to LA?
Starting off in the business you never know where you're going to end up. I thought for sure when I started my career in Fresno and Bakersfield, that there was a chance for me to stay on the West Coast. And when the opportunity in Miami came up...I mean it's Miami! So I had to take it.

I thought for sure I'd be there for a while and I ended up staying there for three years. But there was definitely something missing. The life in Miami was great but it was hard because I was so far from my family.

We're a close Filipino family. I'm one of four girls and my sisters were getting married and having babies and I was missing that. When the opportunity came along to come to Los Angeles, my hometown, I had to take it.

Do you miss the weather in Miami from a professional perspective?
Certainly. I think being a meteorologist, of course you like being challenged weather-wise. Miami was definitely a place where weather was challenging. But at the same time living here in Southern California, it's kind of an ongoing joke that there's no weather here but it's so untrue. California unlike Miami has so many climates. The climate in Southern California is so different from 15 miles along the coast and pushing inland, you have such different weather phenomenons. Unlike Miami, we don't deal with such severe weather but at the same time I think it's just as interesting living here in Southern California and weather is just as important.

2) As someone who is originally from the East Coast, one thing that was a bit of a shock to me when I first moved here was the kind of coverage the local news dedicates to rain. In your opinion, does rain really deserve the lead story treatment it so often gets from the local news?
You know I do, only because Southern California only gets so little of it. With mudslides and landslides, you never know what's going to happen with some of the homes here. Whet her you get a substantial amount of rain or even just a little bit, you just never know.

I know it's hard sometimes when we give a lead story to a storm system and then we only get trace amounts. It's difficult but ultimately Mother Nature dictates whether we get that trace amount or one, two, three inches.

I think we always want to address the rain with caution. We try not to freak out everyone out, but we want to prepare people if it warrants it, especially if the National Weather Service issues advisories and flood watches. When that's the case, we definitely have to inform the viewers that they need to take extra precautions.

3) An LA Weekly story from last year mentioned that Fox 11's Maria Quiban is a good friend and mentor to you. How does the fact that she is a competitor impact your relationship?
I am one of Maria's biggest fans. She and I remain close friends. In fact, she and I hosted an event just recently, a Filipino event. We talk to each other often. We're Facebook friends. I shoot her an email just to let her know I'm thinking about her.

Thankfully, our relationship started when I was a student trying to figure out what I wanted to do. She came into my life and I was very blessed. She was a very motivating and inspirational person and she never changed while I moved up in my career. She was my biggest fan, rooting me on, telling me I'm going to make it here in LA.

Of course, there's the competitiveness. I watch her and she watches me and you know, we always hope to beat each other in ratings and steal the viewers from each other. Because we are both Filipino, it's funny, I think our Filipino community share their viewership with both of our stations.

4) You have to wake up at 1:45 a.m. each morning. How does that effect your social life?
I'm living a little further away from the station, so I have to wake up a little earlier than most people. I actually am fortunate enough that I don't live too far away from my parents and my fiancé and I bought a house together. I get to see my family right after work for a couple hours. I really don't have a social life during the week because I do go to bed so early, I try to be in bed no later than eight. So during the weekend, that's when I try to cram it all in.

5) You have admitted on the air that you are not a Laker fan. You grew up here, why not the Lakers? Who is your favorite team?
When I was growing up, I was a huge Lakers fan. I loved the old Lakers. I loved Magic Johnson, A.C. Green and Byron Scott. They played for the love of the game, not for how much money you were putting in their pocket. As I got older, I guess I lost my taste for the Lakers and basketball in general. My parents are still huge Lakers fans though.

When I met my fiancé he pulled me back into watching basketball but not as a Lakers fan, actually as a Detroit Pistons fan. I know, they didn't do so well this year, but I like their style of play. I like watching Tayshawn Prince. I was bummed to see Chauncey Billups get traded because he was such a great leader and a great player. The Pistons' style of play is the kind I love to watch. I love the team game, not the style of play where it's just one guy putting up 60 points while his teammates just sit back and watch. You know what I mean.

Your honesty on the air was refreshing.Was it difficult to admit to the viewers that you were not a Laker fan?
It's hard because you want to make everybody happy, but at the same time I can't hide the fact that the Lakers aren't my team. Maybe now that my team is out of it, I can wish them luck. You always want your home team to win, but not when they're playing against your real team.

6) Do you have any favorite blogs? How do you feel blogs and social media have impacted broadcast news?
It's very interesting how blogs are just everywhere now. As far as the blogs that I read, I read Weather Underground and some weather blogs. I'm also interested in entertainment so I'll read the entertainment blogs. I like reading Access Hollywood. I read my co-anchor Jennifer Bjorklund's blog, she has a blog for the station.

I think, now especially so many people are going away from just TV, radio and they're sitting at their desk and reading blogs. People are branching out now beyond mainstream media because they want to see what else is out there. They like reading LAist and making sure that they're informed on the who's who of the Los Angeles community. I'm also very familiar with your blog. I've definitely read LAist.

7) When you do a search for your name on Google, the first thing that shows up are your photos from your spread in FHM (in 2006, Elita was voted "America's Sexiest Newscaster" by FHM readers). When you first decided to be a part of the spread did you expect it to have such a lasting effect? How do you think that photo spread has impacted your career?
I don't think it has impacted career at all, actually. I think there's the pictures themselves they don't define me at all. I think when you meet me, I'm completely different from those pictures show.

I get a couple emails once in a while saying, 'Oh, I didn't realize you were featured in the magazine.' But overall, I think it happened so long ago. People don't know me for that. They know me as the girl who does the weather for Channel 4 and they don't really pay attention to the magazine.

When it first came out, I got a little bit of attention for it. I did a couple interviews on the radio in Miami. Other than that, it hasn't really helped or done anything for my career.

Elita Loresca, who tells us she'd "love to continue to reach out to the youth and be a role model to the Filipino community and to college students looking to get into broadcast," can be seen Monday through Friday mornings on NBC4's "Today in LA" and the "Midday Report."