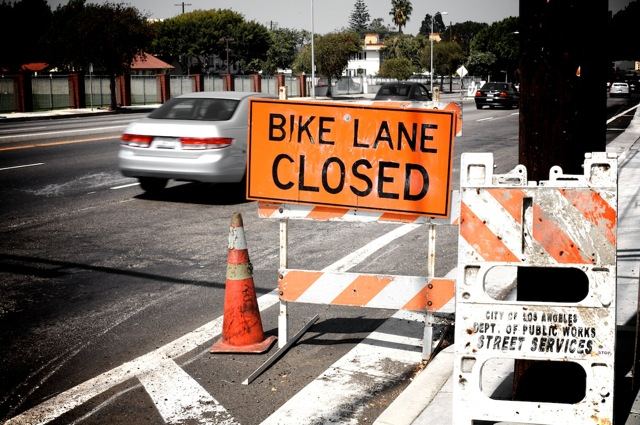 Photo by GarySe7en via the LAist Featured Photos pool on Flickr

The LA County Bicycle Coalition sent out an "urgent alert" Saturday afternoon that was pretty shocking:

LADOT THREATENS TO CUT THE ENTIRE BIKEWAYS DEPARTMENT!! BIKE PROJECTS WOULD BE CUT!!

Los Angeles is facing a perilous budget crisis. All city departments are being asked to submit plans on how they will cut spending, and LADOT have proposed to eliminate the entire Bikeways staff. Not just lay off some people, but cut it altogether.

"That's not too far off mark," said Bruce Gilman, the Department of Transporation's Public Information Officer.

Basically, in the Mayor's proposed budget that includes the "shared sacrifice, shared responsibility" concept, he did not differentiate between general fund and special funds. That meant, specially funded areas also had to make cuts and when LADOT looked at Prop C funds, Safe Routes to School and bikeways went on the chopping block.

But special funds, which can be only use for specific purposes, cannot be used to help relieve the general fund deficit, explained LADOT's Selwyn Hollins, Acting Assit. General Manager for Finance and Administration. "It doesn't benefit the city to cut positions that are specially funded... There is no value in contributing to the shared sacrifice."

The City Council's Budget and Finance committee agrees. Last week, they recommended to the full council to exempt special funded positions from shared responseiliby and sacrifice. Hollins believes the council is likely to approve the recommendation, but there's no guarantee that bikeways will be saved until the budget process has been completed.