LAistory: The Tower of Wooden Pallets 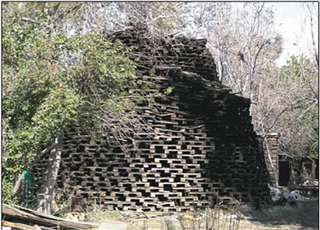 Department of City Planning
We live in a city filled with thousands of landmarks, but whether it's just our proclivity for changing courses like our capricious weather patterns, or it's a matter of life imitating the kind of art that put us on the map, even when we call something a "landmark" it doesn't mean it's even here anymore. Or, really, that it even makes sense. Such is the case with one of the most unusual landmarks to spring up in the city, the Tower of Wooden Pallets that accidentally became art, then a landmark, then—to most—just a memory.

A quirky piece of local history so frequently begins with a quirky character, and LA's Historic Cultural Monument #184 is no exception. It begins with Daniel Van Meter, son of James, the "chemist who invented the chloro-cyanic gas used in World War 1, to hilarious effect," explains Big Orange Landmarks.

Along with his brothers, Daniel spent some time running a ranch on West Adams Boulevard and raising goats, chickens, and rabbits there. He had affiliations with controversial political organizations, like Robert Noble and Ellis O. Jones’s “Friends of Progress," who were rumored to be in favor of overthrowing the American government and to have ties to the pro-Nazi German American Bund. Daniel served some time in San Quentin for his political "sins" and eventually "went on to co-found the American Independent Party in the 1960s."

But in 1951, when Daniel Van Meter noticed discarded wooden pallets piling up at the site of the Schlitz Brewing Company's Los Angeles plant, which had begun to build up because the unionized workers refused to repair them, he offered to take them off their hands. Five truckloads wound up on Van Meter's Sherman Oaks property, located at 15357 Magnolia Boulevard. The land itself was owned by the McMasters family in the 1800s and then "was once part of an apricot ranch owned by actress Louise Fazenda." Van Meter acquired the land in 1947, and with the arrival of the pallets, decided to use the space to build, well, a sort of monument to junk. 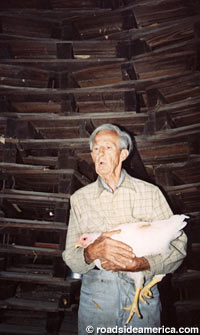 "I had to do something with them," said Van Meter, an artist with a practical side.

Working without a diagram (or permit), he stacked them in concentric circles, creating a cone-like structure with outside walkways. He told the Daily News that the tower was approved by building inspectors, one of whom quipped that he should house a giraffe inside.

It took Van Meter two years to build his structure. When he was done the tower "reached twenty-feet tall and twenty-two-feet wide at its base. There was a thirteen-foot wide opening at the top," according to Big Orange Landmarks. "The open room inside, full of patio furniture and all sorts of detritus, according to legend, marked the grave of a three-year-old who died and was buried there in 1869."

Initially, and not surprisingly, no one really knew what to make of it, and when "building inspectors arrived" they were "stumped [and] classified the giant pallet cone as a fence."

Van Meter, who was eventually joined at the property by one of his brothers, Baron (the beer-can collecting square dancing enthusiast), continued to add junk to his yard like "wooden wagons, junked cars, a 1938 bus, an old outhouse, a tur- ret from a battleship and a gasoline pump," (Harvey).

The home, and junk on the property in 2004 (Department of City Planning)

To say Van Meter was offbeat, a loner, a nutjob, or just an all-around strange duck doesn't even really seem to cover it. He certainly could open his mouth and speak his mind, which he did in 1991, as described on the website Roadside America:

Jailed by Chief Justice-To-Be Earl Warren during World War II as a "dirty America Firster" subversive, Dan believes that Warren is responsible for the sad state of Constitutional jurisprudence. "George Washington worked for my family as a surveyor. Earl Warren's father was a mulatto."

Dan's current project is to "get rid of that communist in the White House." He's also building a replica one-room schoolhouse, "to show the people what we've lost in this country."

The tower was messed up a little during an earthquake, but Dan quickly put it back in shape. Apparently it alone is impervious to the turmoil that is otherwise destroying America.

"When blacks marry women, they tell them outright: 'You leave me and I will kill you.' That's why you find those prostitutes dead along the road here in California. They try to escape and they kill 'em!"

"There's a war on in America against Christianity. The Flying Nun. The 'religious right.' It's all ridicule. All the people who formed America were Christian. Now we're becoming a mongrelized nation."

"The UN is communist. That's where the communists went. They're in control of the schools in California. They don't teach children how to spell; they say that interferes with their ability to 'think for themselves'."

Dan's safe, filled with $50,000 in rare gold coins, was stolen. "Neighbors told me they were all blacks or latinos or something of that nature."

"I wish we could get the police, when they catch these people, to get rid of them right on the spot. We shouldn't spend our money to keep criminals alive."

Of course, this was after the Tower of Wooden Pallets was declared a Historic Cultural Monument, which came about in 1978, a few months after the Fire Inspector "declared the tower 'an illegally stacked lumber pile' and ordered the structure torn down," (Big Orange). Van Meter sought the HCM designation, and demolition could only happen once he moved or died. Robert W. Winter, who was a commissioner at the time and placed an approval vote for the declaration of the Tower, said in hindsight of the designation: “Maybe we were drunk.” 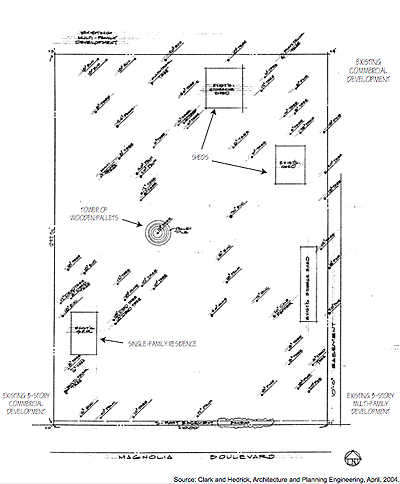 The property, as mapped for developers, in 2004 (Department of City Planning)
Van Meter died at the age of 87 in June 2000. The Tower had been dwindling for sometime, as one can imagine a pile of rotting wood pallets first raised in the early 1950s would, and while his heirs were eager to sell off the land to a developer, the fact that the Tower had protective status slowed things down considerably, since anyone wishing to tear down what remained had to obtain permission from City officials to do so. Westgate Group, Inc. bought the land in 2003 for $4.5 million, and though the Tower was now, according to Harvey, a mere 5 feet tall, they still had to obtain an okay to demolish it in order to build apartments.

In 2005, the Tower still stood, albeit precariously, and while it was, indeed "one of a kind" it was deemed to be "without artistic merit" and approved to meet the bulldozer. Around that time, Joe Dungan, the author of a weekly column called LA Nuts made a visit to the land, and thought perhaps they could champion the Tower of Wooden Pallets' cause:

A determination of the artistic merits of the pallets has been playing out since Van Meter's death. A 2004 environmental impact report included an analysis of the tower from an artistic and historic perspective. The analysis deemed it historically insignificant and artistically uninventive. The historian I met said that, on occasion, museums and galleries raise funds to disassemble, transport, and reconstruct large pieces such as this at their venues. To date, no such facility has stepped up to do this. Except for a 2005 Los Angeles Times article about them, there has been little mention in the media about the tower's threatened destruction. Unlike other historic monuments that are faced with demolition, no outraged preservationists, prominent scholars, or concerned citizens appear to be doing anything to save the pallets.

But it was a losing battle. What remained of the Tower was razed in 2006, and construction begun soon after on apartment buildings, which may even include a tribute in their lobby to Van Meter's oddball creation.

Oddly enough, it was the inevitable fate of the land serving to hold people, and not junk, that Van Meter seemed to want to forestall. When he applied to have the Tower made an HCM in 1978, he wrote: "In a few years this piece of the good earth may be covered by apartments for the storing of surplus people. In the meantime, let this strange structure be, let it continue to be a haven of rest for an individual, that endangered species."

And so where Magnolia comes to an end, just west of Sepulveda, in jam-packed, "surplus people"-dense Sherman Oaks, many individuals will now have their haven of rest where the Tower of Pallets once stood.