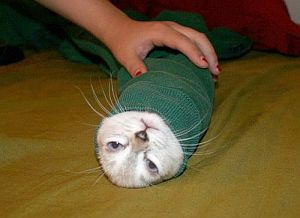 LA Weekly's Jonathan Gold takes on burritos of the north and south in a question from a local reader about her Berkeley loving Burrito friend who is visiting. Says Gold:

Bay Area residents tend to have peculiar ideas about burritos, which they regard as monstrous things wrapped in tinfoil, and filled with what would seem to be the contents of an entire margarita-mill dinner, including grilled meat, rice, beans, guacamole, tomatoes, salsa, sour cream, orange cheese, and probably a lot of other things that neither God nor man ever intended to see the inside of a tortilla, much less the soggy steamed pup-tents that are but mandatory up north.

Of course, this has San Franciscans riled up in the comment section of SFist. "Awwww. LA, their burritos are as cute as their hipsters," one blogger told Editor Brock Keeling, who personally thinks his city's burritos taste "vile."