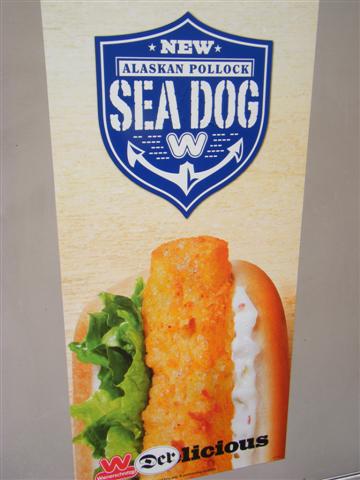 Good news for those of you who don't eat beef, pork, or pig's anus! Wienerschnitzel has just introduced the amazing new sea dog. Now you can gorge yourself on Alaskan pollock - and fish anus.

It wasn't weird enough that Weinerschnitzel (when did they drop the der anyways?) started serving pastrami and Angus chipotle chili dogs. They had to go dredging the ocean.

The sea dog must be in a testing phase right now, because it doesn't even warrant a mention on Weinerschnitzels' official website or menu. It was just serendipity that I chanced upon one.

There's not much on the internet other than a coupon. The food blogs all seem to lead back to Food Beast.

So what does it taste like? The bun was so soft it broke in half, and and the gooey tartar sauce is reminiscent of secret sauce without the "secret" thousand island dressing. The "sea dog" itself was your standard fast food fried fish, very similar to a Filet-o-fish pressed into a hotdog shape. Mmmmmm.

All in all, it was a pretty horrible experience. As Wienerschnitzel's motto says, "Pushing the boundaries of taste!" And Jonathan Gold thought he was pushing the boundaries by eating pig's uterus tacos. I'll see you that uterus, and raise you a pollock anus, my friend!