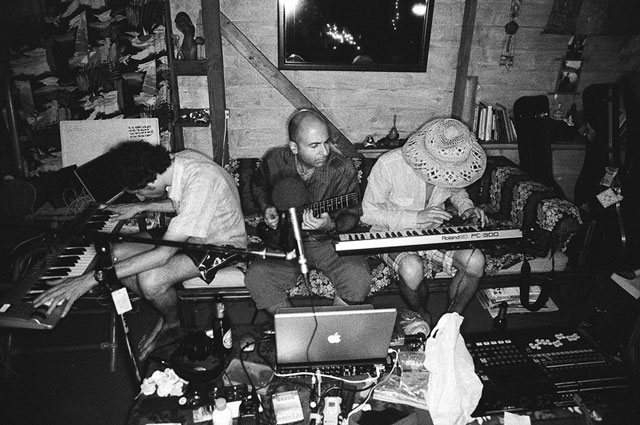 Several months ago, rock 'n' roll photographer, Christopher Wray-McCann, had an idea. What would happen if he got some of his musician friends to drop their cell phones, their laptops, and their lives and hole up in Maui in tree houses for a month to record an album? Taking all the equipment they could carry, various members of Maroon 5, Gomez, Phantom Planet and a few other bands agreed and descended upon their new jungle home. Fourteen members of what was now known as, Operation Aloha, created a light, breezy tropical album, which was created captured the spirit of Hawaii without the usual constraints of songwriting and recording.

The record release party for Operation Aloha will be held this Tuesday at the Troubadour. They haven't exactly practiced, yet, but it should still be great fun to watch. It's the one and only time that the band will be playing a show together, so you should catch them while you can! All Spots to Black front man, Fil Krohnengold, was kind enough to talk to us about what Operation Aloha was like on Sunday. Here is some of what was said.

When did Christopher Wray-McCann approach you to go to Hawaii?
Well, I was living in his house at the time. I had just moved from New York to Los Angeles and was crashing at his place for awhile. He asked me if I wanted to be part of the project, and I was like, "Maui? I'm in!"

Where did the name Operation Aloha come from?
That came from Christopher. He's a big history buff, especially about the great wars. He kinda had a kind of a classic military approach to this thing, and I think that's where the military sound name came from. We only found out later that Operation Aloha was also the same name of the US operation in 2003 when we went into Iraq for the first time.

Oh wow. Did you guys consider changing the name after finding that out?
No, we decided to stick with the name. Hopefully we can change the association to something more peaceful.

So how come in a band of fourteen people there is only one woman?
(laughs) Is there really? Who was listed?

Maureen Wray-McCann.
Well, you're presuming a certain level of planning to this project that just wasn't there. The lineup was really kind of circumstantial. There was never a question of, "What do we want the sound to be?" It was more like Chris sent a bulletin out asking who wants in and when and these are the people who answered. There wasn’t an overall vision. Also, Sam Farrar's wife Stephanie was a part of this as well even though she wasn't listed. She'll be on stage on Tuesday playing with us even though she's about six or seven month pregnant. It's going to be great.

Are any of you from Hawaii or did you just choose Maui because it’s lovely?
Christopher had already been there and stayed in these tree houses before. He just thought it would be an amazing place to create music.

I have to ask. How was living in a tree house for 30 days without plumbing?
Well one of the tree houses had indoor plumbing. There was a kitchen sink and a bathroom which was enclosed in a little porch situation. The shower was outside. It worked just fine. I stayed in that house, so I couldn't tell you about living in the other ones. 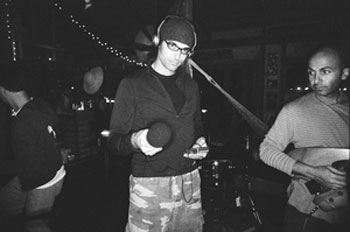 Was it complete chaos having fourteen musicians all playing together? Was there one leader for the group or was it a democracy?
It really wasn't. There wasn't a single fight during the whole time. We fell into this rhythm where we had this chair surrounded by microphones called "The Hot Seat." Whoever was sitting there got to dictate what sort of song was being played and when to start and stop. We rotated ourselves in and out of it. Usually whoever wrote the lyrics of that particular song got to sit in the hot seat. The other thing too we were all on break. For Gomez and Maroon 5, this was vacation and so there was no pressure. All we had to do is finish a record. I, for one, doubted our ability to do that. It wasn't until I heard it mixed later, that I thought that it could work as an album.

I heard you guys had to improvise and build a lot of your instruments. Did you keep any of the things you built?
No, no, we left that all behind. We did not keep the empty beer case that we duct taped to the floor for the bass drum. Nor did we keep the bundles of banana leaves that served as drum sticks. Those stayed behind as well.

What did you bring?
I personally brought a keyboard and a guitar. Someone brought our digital 8-track, which is what we recorded on. Jesse Carmichael (Maroon 5) brought a huge hockey bag of stuff. It looked like he had robbed a clown college with all the noise makers he brought with him. He brought an instrument that sounded like thunder, a saxophone, a meliodica, you know that thing that you blow into with the keys? All kinds of crazy things. Oh wait we did buy a couple things from a cheap music store on the other side of the island including a really crappy high-hat cymbal which we had to take back. 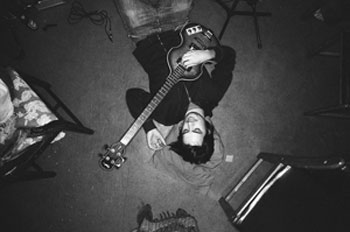 Are you guys going on tour?
Nope. We're only playing the Carson Daly show and the Troubadour and that's it. We haven't even practiced the songs together as a whole band. Our drummer is flying in tomorrow for the show, but it'll be fine. We're professionals. (laughs) I hope it'll be fine. There definitely will not be a tour. Unless by coast to coast you mean, West Hollywood to Hollywood. If we make any money on this album, we'll just just pour it into doing this again somewhere else. We're not going to be your new favorite sensation.

What song are you most proud of on the album?
I would say that Secret Song, which is the song that I wrote. When I formed my band, All Spots to Black, after Operation Aloha I played it at a few gigs, but it just didn't sound right. For some reason that song is much happier being played with Operation Aloha.

You guys are releasing this record on you're own label, Operation Aloha Records. Did you guys offer it to anyone else or did you always know that it would be an in house deal?
Um, I dunno. We didn’t really worry about it until it was assembled mixed and mastered before we thought about avenues for getting it out. It was just easier to do it ourselves. I'm sure it would have been a really easy sell to a label. The pitch would have been, "Hey we have a record and you don't have to pour any money into a tour or merchandising at all." Yeah, I'm sure they would have loved that.

How do you like Los Angeles?
I love it. I think it's rare for an ex-New Yorker to embrace it so much, but as a full time musician it's much easier to weather out the quiet times between tours in LA. There are little niches everywhere that you can hide in and the sun shining on you all day. Perfect weather doesn't get old. Waiting between tours in New York was a Sisyphean task. Oh and I love riding around on my scooter. It's the best. The weather is perfect for that.

Well thank you for talking with us, Fil.
Thank you!

Operation Aloha's record release party will be at the Troubadour tomorrow night. Come and see the first and only performance of this rock 'n' roll experiment.