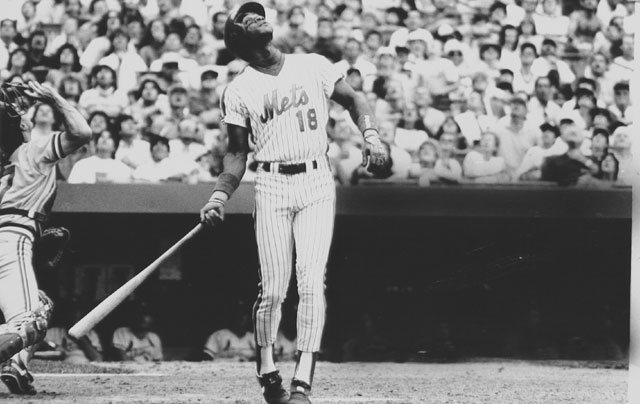 Darryl Strawberry will be signing copies of his book, "Straw: Finding My Way" at Barnes & Noble in The Grove at 7:30 p.m. tonight. | Photo courtesy of HarperCollins

Darryl Strawberry's achievements on the baseball field, four World Series rings, eight All-Star games and Rookie of the Year, will always be overshadowed by what he did off the field. The premiere power hitter of the 1980s and early 90s, who played for the Mets, Dodgers, Giants and Yankees struggled with cocaine addiction and legal troubles throughout his 17-year career.

Now, 10 years after his retirement from the game the Los Angeles native is a changed man and he's telling you all about it in his new book Straw: Finding My Way which was written in collaboration with John Strausbaugh.

In Straw, Darryl recounts his life from a youngster growing up in Crenshaw with an alcoholic and abusive father to the fast life that came along with being a big league star to his battles with addiction and Cancer to his transformation into a man devoted to his family, his wife, his church and his work with children and adults affected by autism.

Tonight, Darryl is back in his hometown signing his book at Barnes & Noble inside The Grove at 7:30 p.m. He'll also be signing copies of Straw tomorrow at 6 p.m. at Vroman's Bookstore in Pasadena.

LAist had the chance to speak with Strawberry about the book, baseball and more. 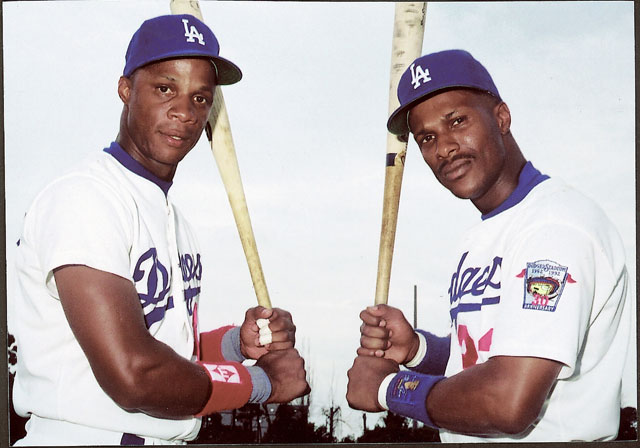 How's the book tour been going for you so far? Do you enjoy getting to meet your fans?
It's going great. I just got in to Los Angeles late last night. I'm thrilled and delighted to meet my fans across the country and with the response I've gotten from the book so far.

More than anything, it's not a book about baseball. I think that most people are starting to realize that and they're starting to see that it's an in-depth story of my life. I'm able to share my experience of everything I went through as a person, a kid. I'm able to tell the story about how I reached the level that I'm at today. I'm in a position where I can reach back and try to help someone else. This is a redemption book. I never quit and hopefully people will read it and it will touch their lives.

Parents will read it and see the importance of childhood and how important it is to guide your kid in the right direction. That was my main goal for writing this book.

Despite your past, you still have so much admiration from your fans. Does that surprise you at all?
It doesn't surprise me at all because I was always a good person to people. I've always came across to people as a human being and not the typical prima donna that sticks their nose up to people. I never was that type of person.

I was always concerned about the fans and had the love for fans because of what they mean to me. The fans of New York have responded so well to me. They have told me that I have given them so much joy over the years when I played. I think a lot of times, people don't realize that until you're gone.

Now that I am retired, I get so many fans in New York who will tell me that they loved watching me, they have memories from the championship seasons. Everybody has a journey and people have personal struggles in their life. But I think that fans respect me more than anything because I didn't quit. I didn't give up. They realize that this man has a human story that is remarkable. He's got a story that would probably touch the lives of others and could teach some people something about the ups and downs of life.

My faith is a tremendous part of why I do what I do, and who I am today. I help others because I understand truly that it's not about me. It's about people that can see you and see what you've been through.

Seeing you survive the struggles gives them hope not to go over the cliff and say goodbye. That's what it's about. It's a book about hope. Regardless of what your struggles are, stay in the game and find your way. That's why I named it "Finding My Way."

The stories of your sexual escapades seems to be the one element of this book that the media has latched on to. Are you surprised by this?
No. I'm not surprise by that at all. It doesn't surprise me that people are interested in me digging into the activities of being a sports star in that era, and the lifestyle that came along with it. That was just part of what transpired then and what I experienced.

No bragging about it, It was crazy and wild and we had fun but that was real life for me. It's not the way a person lives everyday of their life. It's just certain things that happened, certain isolated incidents. Of course, they feed off of that, they think it's pretty cool that I talk about it but that's not the main purpose of this.

A theme throughout the book is you seeking an identity, something you say your father never gave you. In an ESPN The Magazine article back in 2002 your son Darryl Jr. said, "The worst thing about being Darryl Strawberry's son is carrying the name around," so he changed his name to DJ. Do you find it ironic that both you and your son experienced these identity issues?
The thing about it, was my identity issues were a different story. Mine came from no love, no affection. It was brutally bad.

DJ's identity issues had to do with carrying my last name. He never been beaten or never been hit by me. He never had to experience any of that. His issues were because of what the perception was about me. Everybody wanted to make it like his father wasn't a good person.

My kids have never starved, never lived the life I lived. They are blessed and they always have been blessed. My relationship with my children is true and they have nothing but admiration and respect for their dad.

Are you upset that the Mets never became a dynasty?
I don't think that I'm upset. I think I'm disappointed because we should have won more. We had opportunities to do more. We didn't reach the goals that we wanted to. We lost a couple of years where we shouldn't have.

We lost in '88 to the Dodgers, who ended up winning the World Series. In '85 we lost the division to the Cardinals. A couple times we had it, we just couldn't finish it.

There's a fascination with the '86 Mets, still to this day. Much of that has to do with the lifestyle that you guys lived. Do you think that that team would have been able to exist in this era, considering the current media environment we are in with blogs and the use digital cameras/cell phone cameras drawing more attention to the athlete's personal lives?
I don't think it would have been a problem for us. We wouldn't have cared less. We didn't care then. I don't think we would have cared now. That's just who we were.

We loved to be hated, it was just a part of our nature. I don't think we were concerned with what people thought of us.

If we were around now, we would be out there and we'd be all over the Internet. Everybody would be like, 'Look at these animals,' but those same people would continue to come to all of our games and continue to boo us. We loved to hear them boo us.

What's your most memorable home run?
The one in St. Louis and the one in Montreal. I hit the roof in Montreal and the clock in St. Louis. Those are two that stand out to me.

What was your initial reaction when you realized you had the opportunity to come home and play for the Dodgers?
I thought it was great. I thought LA would be great for me, coming home and all. I also think that it was the biggest mistake I made in baseball. I'm pretty much a New York guy. I was accustomed to New York baseball fans and New York media. I think in LA, baseball was a little different for me, coming from New York. I was so used to the intensity level that the fans in New York have, in LA it was a more of a laid back atmosphere. They come late and leave early. That's not the case in New York.

Do you have any fond memories of being a Dodger?
Definitely have some fond memories of my time as a Dodger. We came close to winning my first year, we couldn't get over the hump but we came close. There was definitely memories here. I was a Dodgers fan growing up, I loved watching Steve Garvey, (Ron) Cey and Davey Lopes. The Dodgers always meant a lot to me. They're what inspired me to play baseball.

In the book you talk quite about addiction, and how it is an illness. In 1994 as a member of the Dodgers, when you admitted to having a substance abuse problem, Tommy Lasorda mocked your claim that your addiction was an illness and called you "dumb" and "weak." How did those words affect you? How did that impact your relationship with Tommy?
It never affected me. I'm not the type of person to point fingers at people. I know when you point fingers at someone, there's probably three more people pointing fingers at you. So I never wanted to make opinions or anything about Tommy.

I have nothing but respect for Tommy. I love Tommy and his wife Jo. I know them personally and they've always been special people to me. I just hope that along the lines somewhere that he would understand that I'm not the only one whose been affected by addiction. There's millions of people that suffer from it.

You have to know about it to be able talk about it. When you don't know about it, it's hard to have an opinion about it because you don't understand what it's like to live with it. I think you have to be educated, if he had been educated he would have known that there were millions of people suffering from addiction like I was at that time.

The fact is, not that many African-Americans are playing in the big leagues anymore. In my time, there was a lot of us playing. The percentage was high. We all came from the inner-city and we all played Little League and we played youth baseball.

The MLB has to get more involved to get the inner-city kids back. They have to put money into the programs and money into parks. That will go a long way.

Where I'm at today would be the highest point for me. The transformation in my life through my faith and who I help and my helping young people. I go to detention centers in St. Louis to talk to young men in trouble, I have a Darryl Strawberry Foundation for children with autism. I raise money for that. Actually, a percentage of the sales of my book are going to the Darryl Strawberry Foundation. 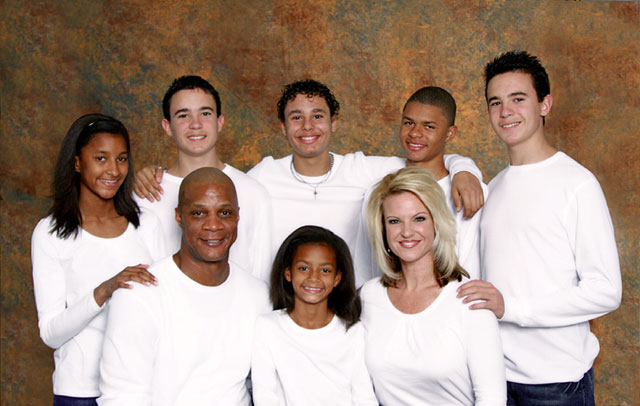