Interview: Katie Melua Talks About the US Release of Her Third Album, 'Pictures' 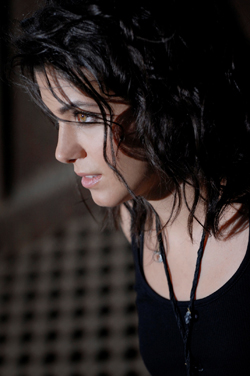 UK-based singer/songwriter Katie Melua has sold more than 10 million records, performed for the Queen and headlined at Wembley Arena. Even though she can sell out larger venues, Melua still enjoys playing more intimate spaces. Tonight, a lucky few will have the opportunity to hear her play a set at the Hotel Cafe in Hollywood.

Melua's current tour coincides with the US release of her studio third album, Pictures, which mixes jazz, folk and pop influences. LAist recently spoke with Melua to learn about her childhood in the country of Georgia, the new album and her favorite roller coaster in Southern California.

I did, and it was so bizarre! I couldn't really play the guitar or the piano, but I knew I wanted to write songs. I used the computer to help me program keyboards and get a backing track going before writing a song on it. But I ended up spending all of my time on the backing track. Then I realized that the kind of music I love, the singer/songwriter stuff of Joni Mitchell, Leonard Cohen, Nick Cave and Nick Drake, was more acoustic-based and focused more on the melody and lyrics. So I knew I had to switch to a guitar or the piano, and that was good because then I could really concentrate on those aspects.

What drew your attention to the guitar?

I just picked up the guitar because it seemed more suitable. I'll tell you what it was about the guitar—you can pick up the guitar and you don't even need to be playing it very long to be able to write a song on it. On the piano, you have to be a lot further along before you can really create something.

You've said that songs sometimes come to you just as you're falling asleep. Have you ever come up with a lyric or melody in your dreams?

I have! I've been woken up by it and I've looked around and realized my tape recorder wasn't there. So what I've done is ring myself on my mobile, and because I'm ringing myself, it goes to answer phone, so I leave myself a message with the idea on it. The only song that's made it on an album through that process was "Spider's Web."

Are you excited about playing in some smaller venues during this tour?

Yes! I have played on my own before, completely acoustic, but it's only been half-hour sets. It's amazing to be doing an acoustic tour now where the sound is completely in my control and it's so intimate between the audience and me.

Which song off the new album is the most fun to play live?

It's a song called "Perfect Circle." It's lots of fun, because when I play with the band, they jam over it and do their thing. I get to play with amazing musicians and their input is really special.

"Mary Pickford" is a fun opening track, and I love that it also touches on the history of United Artists. What's your favorite thing about that song?

I love that song because it's so unusual. You just can't forget it; it's just so weird and I love songs like that.

How has your songwriting process evolved since your first album?

You know, it changes every day. It's kind of difficult to pick just one element of songwriting. I suppose these days I tend to be a lot more focused on lyrics and words and really trying to figure out what the song means.

Do you usually start with the lyrics when you write?

You have to start with the center of the song, and if the center is a lyrical idea, then yeah. If the center is a melody, then you start there. To me, I think the biggest thing that's changed is that it's more about the creation process than the end product.

After the release of your second album, you said that in your third album, you wanted to get further back to your roots in terms of Georgian influence. Is there a song in particular that you feel contains that influence?

Probably not on the third record. We played around a lot with ideas for the third album and it ended up being more of a concept—a loose one—about films. So we didn't really explore the Georgian thing that much, but I tend to do a few Georgian songs when I sing live. We've got a live Pictures album coming out that has a gorgeous Georgian song on it called "A Yellow Leaf." 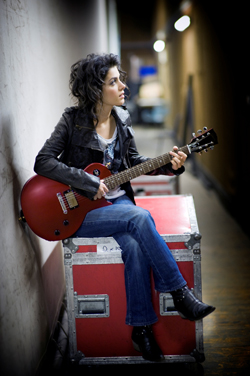 Katie Melua
You wrote the song "Faraway Voice" as a tribute to Eva Cassidy, and I heard you recently released a cover song that featured both of your vocals. What's your favorite Eva Cassidy song or cover?

There are so many. First, I'd go with "Fever." "Wade in the Water" is gorgeous, and "Songbird" is also stunning.

I know you've played arenas as well as smaller venues. Which of the two do you like better?

I like the fact that I can do both. I used to think, "I'll always like the smaller venues because it's intimate and it's great," but when you do a huge arena and there are 10,000 people with energy just bouncing at you, there's nothing quite like that. It's a case of appreciating one because you get to experience the other, and vice-versa. Diversity is a good thing.

Which do you prefer most—recording in the studio or performing live?

I definitely love being on tour and meeting an audience. But being in the studio is also really exciting, because that's when the creation happens—when you're making something new and different. I've been touring quite a lot the last few years, so I feel like it's time to go into the studio and make an album.

Have you written most of the songs for your next album?

I'm in the middle of it right now, so yes, I'm writing. And I'm also working with other writers on some stuff. It's going pretty well.

I know you have a song on Pictures called "Scary Films" and I think I read somewhere that you want to take a course in horror movies. Is that true?

Do you want to make horror films?

No, not make them; I'd just like to study them. I think I have a fascination with fear and why we enjoy fear on an entertainment level. It's really fascinating to be held at the edge of your seat, and I'd just love to get into that a little bit more.

Just the other day I learned that you made a brief appearance in one of the movie trailers in the film Grindhouse. How did that come about?

I just got a phone call one day and was asked if I'd be involved in a project that Tarantino and Rodriguez were doing, and I'm a huge fan of both their work. I'm not an actress at all, but when I was told that it was a very tiny thing, I said, "Yes, let's have fun for a day!" It was really great actually, and I learned that fake blood tastes like toothpaste. (laughs)

I love that you're an adrenaline junkie—you've gone SCUBA diving, skydiving and love flying planes and going on roller coasters. Have you been to Magic Mountain or Knott's Berry Farm?

I've been to Magic Mountain four times. I'm obsessed with that place.

Do you have a favorite ride?

X2. That is sublime. It's just ridiculously amazing and I've never been on anything like it.

You hold the Guinness record for performing the “deepest underwater concert” in history. Was that when you first got the urge to go SCUBA diving?

I had done a few SCUBA diving lessons on holiday before that, but there was no SCUBA diving involved with the concert. It was basically in a building that goes all the way to the bottom of the ocean. So I didn't have to equalize or do anything you need to do when you SCUBA dive. There wasn't any pressure difference, or at least anything that was noticeable, because it's all contained in a building.

You've performed for the Queen and Nelson Mandela, and met Paul McCartney. Who do you want to meet next? Does it get any better than that?

I've never really gotten starstruck when it comes to meeting people. I always think it's better to meet them in your mind, and that usually happens from their work. For instance, I'm the biggest Joni Mitchell and Leonard Cohen fan. I know it sounds a bit strange, but it's enough just to have their music—because while I know they're just human beings, in my mind they're gods.

Since some of the first music you remember from your early years in Georgia was a pirated Queen album, I was wondering—did the music you listened to as a young girl help you learn English?

Well, I lived in Georgia until the age of eight, and although I listened to English music all the time, I didn't really learn that much English. I mean, I learned to recognize words like "love," "hi," and "goodbye," but that's pretty much it. So it was really only when I moved to the UK and went to school there that I learned to speak English.

I know you're a fan of singers like Camille. Have you ever sung in French?

No, I haven't. I tried learning French for a bit, but when you haven't got anyone to talk to consistently, it's really difficult. I have a friend who loves French so much that he hired someone to call every single day for an hour to have a conversation with him in French. Isn't that cool? That's dedication and going after something you really want!

At the moment there's a great charity called ASAP. They build orphanages for kids in Africa who've been affected by AIDS. It's a real hands-on charity and they've really put me to work—and I love that!

Thanks for speaking with LAist, Katie!

Katie Melua will be perform tonight at the Hotel Cafe. Although the show is sold out, the Hotel Cafe's website says that a limited number of tickets may be available at the door. To learn more about Katie Melua's music, visit www.katiemelua.com.