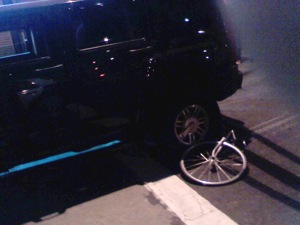 Photo by Matt Stilline
Early Friday morning in downtown one bicyclist was sent to the hospital overnight after he had an incursion with a Hummer. That same vehicle ran over three bicycles a few minutes later.

What happened? Well, that depends on who you ask. The police say, via an unsolicited witness, that a cyclist, possibly drunk, crashed into the Hummer when he approached the passenger side door (apparently, he wanted to confront the occupants, but was going too fast). The group of cyclists say the Hummer purposely came up from behind and took one of their own out (full description of cyclist side of story here).

Basically, here's what both sides can agree on: something happened between the hummer and a cyclist, who got injured. Other cyclists surrounded the Hummer to ensure the driver didn't leave the scene. Well, he did leave the scene and in the process, ran over three bicycles dropped by riders moving out of the way. The police arrived, talked to each party, interview witnesses and call it a day, arresting no one, or as Sgt. Kevin Moore told LAist, they "split the baby." That's because to the police, it seemed that the Hummer driver had begun the incident by obnoxiously honking his horn at the cyclists rather than driving around them--it was 2 a.m. with zero traffic. They said he probably had feared for his and the passengers' safety when his car was surrounded by cyclists, making it okay to leave the scene of a hit and run.

As for the injured cyclist, he made it home Friday afternoon from the hospital, luckily with minor injuries. "It was so fast, i don't believe what happened," he explained to LAist. "The next thing you know, I'm in the air. I'm really lucky nothing is broken." Details were fuzzy to him, but one thing was for sure: he didn't hit or even approach the Hummer--it came out of nowhere sideswiping him.