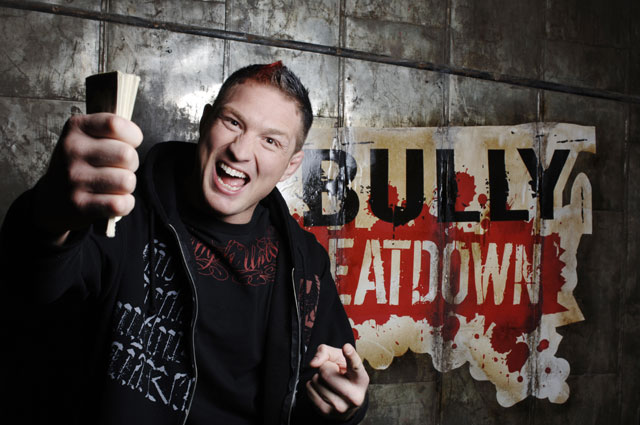 Jason is a mixed martial arts (MMA) fighter with more than 30 wins under his belt. Mayhem who is best known for his flashy entrances and hyper-aggressive style in the ring is just as much a showman as he is a fighter. When he's not fighting in front of his fans, also known as the "Mayhem Monkeys," Mayhem can be seen on MTV's "Bully Beatdown" which throws bullies into the ring with professional MMA fighters and airs Sundays at 9:30 p.m.

Mayhem, who tells us "I know about the LAist," gave us a call to talk about punching people in the face for a living, being on MTV and the MMA scene here in Los Angeles.

1) How did the opportunity to host a show on MTV come to you?
They were looking for a mixed martial artist who was both hilarious and could kick some ass. I was one of the only people who could fill that void. I may not be funnier than him, but I could definitely beat the shit out of Dane Cook. I definitely could. I'd kick him right in the head. It would be a good time.

2) How have your peers in the MMA community responded to the show?
I don't give a damn. The MMA community is out of their mind. I think I really expected them to hate the show and to hate my guts. I was expecting them to think I was selling out, but that hasn't been the case. The response has been 'Mayhem is funny' and 'The show is cool.' The hardcore mixed martial arts fans as fair weather as they are, they are not really disliking it. That has been the biggest surprise to me.

3) What do you enjoy most about the show? Do you ever feel bad for the guy who's getting his ass beat?
I would feel bad for these guys if they were just guys and not such pricks. These are guys who are trying to make themselves feel better by pushing other people down. To me, that's unacceptable. So when I see these guys vomit all over my floor, I think it's pretty hilarious. I have enjoyed that part but what I enjoy most is that I have a medium to express myself that is not punching people in the face. What I do is an art form, and now I have a different form of art which is talking crazy. That's actually something I'm pretty talented at.

4) You stay busy both in and out of the ring, you've got "Bully Beatdown,' you've got a radio show among other things. How difficult is it to balance between your training and all of the other things going on in your life right now?
My body has been so run down from all the radio appearances and TV appearances combined with training hard three times a day. My body can only take so much. You need a lot of sleep. Normally, what I do is train then sleep, train then sleep, train then play some video games then sleep. Now I've got to throw in some wacky talking in some interviews and choking out newscasters and going on "Big Boy's Neighborhood" and all of the sudden it's not the dog and pony show it once was. I don't have a comfort zone. I'm always uncomfortable. I always want to do more and do bigger stuff. I don't think you move to LA to work at Kinko's for six years. I think you move to LA because you want the problems that a superstar has. My life is consumed by work work work, and I wouldn't have it any other way. My job is kicking people in the face. That's my regular job. To blow off some steam, I kick people in the face.

5) Where does the crazy talk that you've become famous for come from? How much of it is understanding that fighting is also a form of entertainment?
I don't know I think it's a genetic abnormality. My mom and my dad are both fairly crazy. I think that I'm entertainer first and a fighter second. I'm not just there to win. I think my fights would be boring if that were the case. I am there to make everyone excited and love the fact that they just saw a Jason Miller fight. That's really the angle that I approach MMA from. That's why I am more popular in Japan than I am here in the U.S. Here, it's all about whether you win or not. If you put on a boring fight and you win, it doesn't matter because at least you won.

6) What's the hardest you've ever been hit?
My dad laid me out in an Eckard Drug store parking lot. I deserved it, but man, I don't remember ever getting hit that hard.

7) The MMA scene is very big here in Southern California. What is about the area that has brought so many fighters out here?
I think that what happened is there was an influx of douchebag kids, and I was one of them, who saw Tito Ortiz and some of the other guys were from Huntington Beach and thought, 'Yeah, I'm going to be an ultimate fighter.' I packed up my van and drove across the damn country from Atlanta to come out here and do the whole fighting thing. And today there's just a whole lot of gyms and a ton of fighters. It's created this whole sub-culture of mixed martial arts. There's a ton of fighters and former fighters and just a crazy amount of tough guys with messed up ears all over the area. I moved to Huntington in 2001 and have just seen the sport flourish and with that Southern California has exploded. There's every mom and pop MMA gym you can have out here. I just think that MMA through all of its ups and downs gives something to a community that you can't really fake. And that's kind of what Bully Beatdown shows. You can act as tough as you want, pretend to be whatever you want, but the guy who puts in dedication, discipline and courage is the one who's going to be the toughest guy. And that carries over not only in fighting but in your life. Holy crap! Write that shit down! See, I have my moments. I may get punched in the head for a living but some of that stuff still works up there.