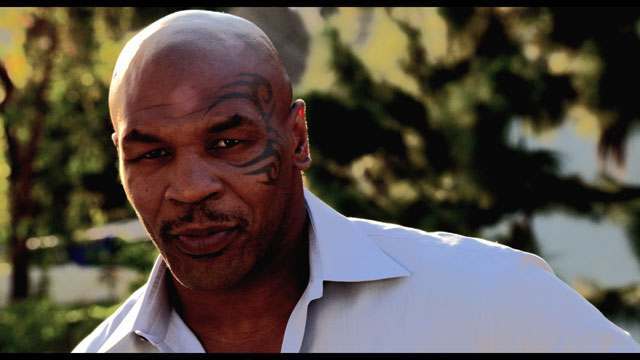 With nothing more than his fists and black trunks, Mike was able to, in his words, "win all the championships." With nothing more than Mike's stories filled with brutal honesty, a couple of HD cameras and footage of "Iron Mike" both in and out of the ring, Tyson has won over critics, festival committees (Regard Knockout Award winner at Cannes in 2008) and fans alike.

Why has a film that is essentially a 90 minute long interview with a retired prizefighter/convicted rapist/ear biter garnered such praise? Because it is absolutely entertaining, or in the words of GQ's Tom Carson, one of the few critics who didn't give the film high marks, "It's never boring."

Director James Toback, who previously worked with Mike in Black and White and When Will I be Loved, rented a house in the Hollywood Hills, sat the protagonist down and let the cameras roll. As a result, we get to see Tyson's take, and Tyson's take alone on his troubled childhood, boxing career, marriage, women and his love for the man who got him off the streets and into the gym - Cus D'Amato, a subject that brings the "Baddest Man on the Planet" to tears.

There are no Tyson experts, friends or family members to chime in to give their feelings on the former champ. This is Mike on Mike uninterrupted, uncensored and unlike you've ever seen him before.

The film uses split screens and overlapping echoing audio from Tyson's interviews to create a collage on the screen. While initially this may difficult to get used to, this style accurately displays the multiple Mikes we encounter during the film.

Last week, James Toback told a group of reporters at a roundtable interview which LAist was a part of that he knew he had to make the film this way "to get across the chaos in the mind."

Toback, who filmed for five days and edited for 12 months, had creative control of the film despite the fact that Mike Tyson is one of the documentary's executive producers (Nas and Carmelo Anthony also get executive producer credits as well. Correction: Nas is credited as a co-producer). This meant that the film's protagonist was unable to take any of his comments back.

That is what makes the film so entertaining, Mike's honesty which will hit you like the right hand on the chin that knocked out Michael Spinks in the first round in their 1988 bout. Mike takes the gloves off. Whether he's describing Desiree Washington ("that wretched swine of a woman"), Don King ("a wretched slimy reptilian motherfucker") or his own sexual desires ("I want to dominate a woman") and the audience feels the weight of the blow. Audience members' jaws will drop with stunned disbelief several times throughout the film, the same way crowds in Las Vegas and Atlantic City did when they watched the man in the ring.

Toback calls the film "a double Greek tragedy." He adds, "he came from nothing and rose to unimaginable heights and then was brought back down because of his flaws. Then he did it again and was brought back down." None of Mike's flaws are hidden in the film because as Toback says, "he wasn't really afraid to talk about anything."

One flaw Mike addresses with no restraints is his temper, which is best seen in his recollection of the ear biting in the second fight with Evander Holyfield, which was ironically dubbed "Sound & Fury." Finally, we can know what was going on in Mike's head when he decided to bite another man in the ear.

The film also has it's flaws. The scenes of Mike walking on the beach at Sunset alone don't seem to work nearly as well as the moments spent with Mike sitting in front of the camera on a couch. Also, there were some omissions from Mike's most recent past. His days of working open training sessions in the Aladdin Hotel in Las Vegas in 2006 to make some much needed extra cash or his arrest in Scottsdale, AZ for felony drug possession are both left out of the film. It would have been nice to hear Mike's thoughts on both of these topics, but as Toback said, "this film at 90 minutes seemed to be the right length."

This film was 10 years in the making, as Toback said he knew he wanted to make this film while working with Mike on Black and White. Its very much worth the wait.