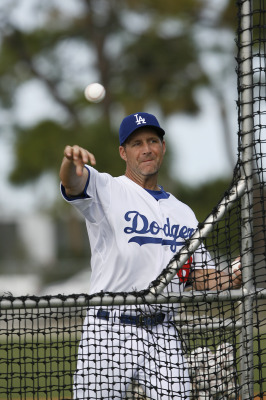 Dodgers Bullpen Catcher Rob Flippo throwing batting practice. | Photo by Jon SooHoo/LA Dodgers
LA has a diverse cast of characters. Whether it's the characters with stirring stories or interesting occupations or the people who are just simply characters, this town has them all. In an effort to get to know some of those characters a little better, we've created "Seven Questions with..." If you have a suggestion for a future Seven Questions subject send us an email.

Rob Flippo is one of the Bullpen Catchers for the Los Angeles Dodgers. Rob, who was previously a coach at the college ranks at University of North Carolina at Wilmington, describes the job as "the manual labor that's involved with the game." While that may not sound as glamorous as say being the Dodgers' starting catcher or even their emergency catcher, Rob will tell you that he "is absolutely living a dream." As Rob says, "I'm a huge fan of the game who gets paid to be a part of it at the highest level."

Rob, who has served as the Dodgers Bullpen Catcher since 2001 and is one of the few Bullpen Catchers in baseball with a Wikipedia page (he didn't know he had a Wikipedia page, "Really? I had no idea") took some time out before last Friday's game to give LAist a call to talk about the job, what goes on in the bullpen and a little about what it's like to watch "Manny being Manny" on a daily basis.

1) Besides catching in the bullpen, what are some other duties of the job?
You get everything set up for the workouts, throw batting practice everyday. Whatever they need you to do. We hit fungos, during workouts. We're (Mike Borzello is the Dodgers other Bullpen Catcher) pretty involved with trying to help get stuff ready for the game. We've got a pitchers/catchers meeting today, we try to get involved with that as much as possible so we have a good plan going into the game. We work closely with the bullpen coach and the pitching coach to develop a plan for how to pitch the guys on the opposing team. Then we make sure that that stuff gets relayed to the players in the bullpen as they get ready to go out and work for the day. I guess you can say it's all the manual labor that's involved with the game. That's what a Bullpen Catcher does, we pick up some of the stuff that other people can't do because they've got more important things to do at the time.

2) I've read that another duty of the bullpen catcher is serving as a psychologist to your pitchers. There's a story from a few years back where Barry Zito, when he was a member of the A's, and his teammates were crediting their bullpen catcher for getting their mind at ease. Do you think helping your pitchers feel comfortable mentally is a huge part of the job?
For a starter, it's probably not as much. But for guys in the bullpen, they get into routines. They kind of get comfortable throwing to a certain guy to prepare. Since you see them throw everyday, they'll ask you questions like "Am I in the right slot?" or "Am I staying back? or "How's it look?" So I think that's important. Starters you may catch a side, in between their starts, and get them going before a game. I don't know much your starter would rely on you though. I got to catch (Eric) Gagne, and Gagne wouldn't get loose with anyone else. (Jonathan) Broxton is kind of getting into that mode now, where he wants me to catch him and get him loose. I think its more that you're familiar with what they do, and they have to be so precise when they go out there and their routines are so precise when they're getting prepared. You know what their doing. You know how quickly they like to get ready, so you know how quickly you've got to get the ball back to them. You know what their stuff should look like coming out, so you can tell them what they might need to tweak. I think the pitchers are looking for, just that consistency of somebody giving them feedback. I think that's where most of the importance comes in.

3) Some would say that a Bullpen Catcher is a pretty thankless job. What is that you love about the job?
I'm a guy who played in the minor leagues. Once my playing days were over I never thought I was going to have the opportunity to be around big league baseball. First of all, they're going to pay me to do something that involves baseball, that's amazing; and then to be able to do that at the highest possible level. I know I'm not going to be able to be a bullpen catcher for the rest of my life so this is an opportunity for me to learn. Think about the guys I am around everyday, people like Joe Torre, Don Mattingly, Larry Bowa and all the guys that are here that you get to learn the game from. As a guy who still wants to be involved in coaching, you get to watch how these guys do it at the highest level. And I wouldn't say it's a thankless job. You'd be amazed how much these guys will let you know that they appreciate what you do for them. Every single day, I've got guys saying 'Thanks, I appreciate what you do.' So it doesn't go unrecognized within the team and that's the most important thing, that these guys see the effort that me and Mike both put into our jobs and they appreciate it and will let you know. It's really not as thankless as it might seem. The other coaches, Joe (Torre), Ned (Colletti), Mr. McCourt, they all let you know that they appreciate what you do. That's what inspires you to go out there every single day and work hard at what you do. Even though it does kind of seem like grunt work sometimes, you go out and do your job with pride because you know that the people you work with really do appreciate it.

4) What do your friends outside of baseball think of your job?
They can't believe I get to do it. I ran into some high school friends in Arizona when we were there for Spring Training and they look at me like someone who is absolutely living a dream. It's true. I don't know what to tell them. The thing that I try to let them understand is that as cool as they think it is, I think the exact same thing. As much as they love what I get to do, I love what I get to do. Like I said, it's amazing. Everyday I get to come to Dodger Stadium and be a part of an organization like this and to make a living doing it. Oh man it's unbelievable!

5) What are some of the best and worst bullpens in the league?
Any bullpen that's on the field is not so fun. There's not that many left. You've got Chicago, San Diego and San Francisco. Those are the three that come to mind. Tampa has it on the field as well but they're in the other league so we've only been there a couple times. There aren't that many left but those are the worst for me. Chicago's tough because you've got a bad background on top of being on the field so you don't see the ball really well. To be honest with you, I'm not a big fan of Houston's. It's like a cave back in there. We're back in there underneath the stands, so you can't even see plays in left field. You feel like you're in the catacombs when you're there. Colorado has a nice bullpen, that's just a nice place in general. I like ours. For a Bullpen Catcher the thing that we want the most is just to be able to see the ball coming at us. So any time you're in a place with a nice dark background without an extra advertisement on the wall, where you lose the ball, you're good. There's a few places like that. Atlanta's got a nice bullpen.

6) What are you and the rest of the guys in the bullpen doing in the early innings?
Usually we don't get to work until like the fifth or sixth inning, we'd like to get started around the eighth, but we've always had the type of bullpen guys that are locked in to how the guys are being pitched. We'll carry on some normal conversations, you know, but they're always focusing in on how we're pitching their guys. If one of their guys gets a hit, you'll hear the guys talk about the location of the pitch and that sort of thing. That helps the guys stay focused on the game plan and their mindset. We'll review and go over the way we've been pitching their guys in the first five or six innings to help them solidify their strategy for when it's their turn to go out there. They'll talk and goof around from time to time but I don't think anyone misses a beat as far as what's going on in the game. I think that's been one of the keys of our success for as long as I've been here. We've always had that type of bullpen, with guys who really pay attention to the details of the game.

What about when the Dodgers are at bat?
Yeah, they're looking at what our guys are doing as well. Actually, we try to put a little game together. Everyone picks a guy on offense for the day. Every base hit is a point. Doubles are two, triples are three points, four for a homerun and a half-point for a walk.

So it's like you guys are playing fantasy baseball in the bullpen?
Yeah, exactly. The guys in the bullpen are pulling for their guys. It also helps the guys stay focused on what our guys are doing too. It gets pretty competitive and there is no prize. The winner gets nothing. We're just playing for bragging rights until the next game. You'd be amazed at how competitive these guys are. They don't care that they don't win anything, just the fact that they won is all they're looking for.

7) Do you have any "Manny being Manny" stories to share with us?
I'll just tell you this, he makes everyone feel like they're the important one. I don't know if I am explaining this properly, but this is Manny Ramirez - one of the premiere players in all of baseball, and he's talking to you as if you're the special one in the conversation. I don't know anything about what happened in Boston, all I know is what I've seen from him here with the Dodgers. You'll see him walk in and sit next to someone whose got a half-a-season in the big leagues, and just talk to him, give him a hug and hang out with him for 15-20 minutes. He doesn't care who you are, he'll give you this time because you're a teammate. I don't know about "Manny being Manny" to me he's just a guy whose carefree, laid back and absolutely loves to play the game of baseball.