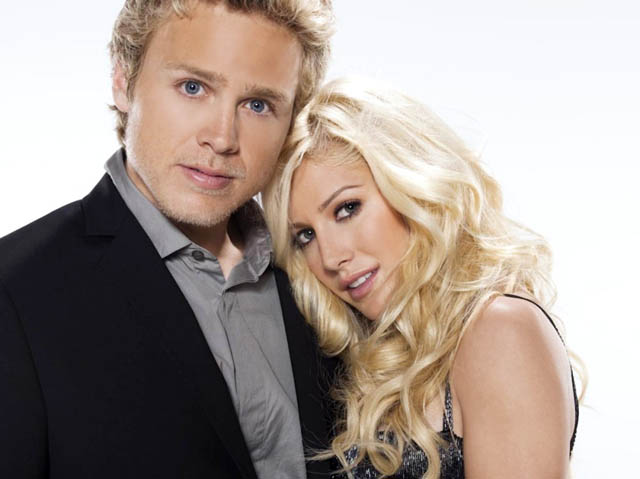 Heidi & Spencer of MTV's The Hills found time to talk to LAist. | Photo courtesy of MTV

Heidi and Spencer, also commonly referred to as Speidi or the EOWC (End of Western Civilization), can be seen Monday nights on MTV blurring the lines of reality on The Hills, which just recently kicked off its fifth season. Outside of their "work" on The Hills, Heidi and Spencer are busy pursuing other endeavors and tweeting all about it along the way. Thanks to their rapid fire Twitter updates, I've gathered that Heidi is, among other things, working on an album, (pop music, in case you needed to ask) while Spencer is busy responding to pretty much everyone who sends him a reply and finding time to manage an MMA fighter named Kevin Casey.

After two postponements, more than four hours of sitting by the phone (I'm patient) and an accidental hangup on my part (I'm also clumsy), Heidi and Spencer (or should we say the characters that are "Heidi" and "Spencer") finally spoke with LAist. Speidi (but mostly Spencer) and I talked about every thing from The Hills, which Spencer called a show "grounded in reality with real people and not the facade of fame that surrounds those real people who are in the cast" to Barack Obama with a little bit of the economy, music, AIG and Dr. Drew in between.

1) The fifth season premiered with an explosive start, there was a fist fight and a reunion of sorts, yet the ratings were down. Does the drop in ratings concern you at all?
Spencer Pratt: Not at all. Every year and every week that goes by due to all the new platforms, television ratings are so fragmented by where people are seeing it. Whether it's on their cell phones or MTV.com or Apple TV, The Hills has consistently been number two on iTunes since it premiered, once MTV does all of its research the numbers of eyes on the show is astronomical. That's why the show is now in its fifth season with 25 episodes per season. I'm very excited to open the season with 3 million viewers for a show that's been on hiatus for a couple months.

2) How has the economic crisis impacted your lives?
SP: We definitely don't receive a $100,000 to show up at nightclubs anymore. So that's one huge life-changing difference. It makes me miss the old days, back when Paris Hilton and these fools were cashing in like a gold rush every year.

3) Heidi, you are pursuing a music career. What do you think you’re going to need to do to get people to take your music career seriously? Do you think people have embraced your music career so far?
Heidi Montag: Just keep going. Just listen to my songs, they're just as good as anything out there. I definitely think people have embraced it. I'm just in the beginning stages. I'm independently doing this, record labels put $10 million dollars into their artists with their marketing and music videos, to do it independently and get as much attention as my music has gotten already should be respected.

4) Heidi, during the election you endorsed John McCain for president. How do you think Barack Obama is doing as president so far?
HM: Not as good as McCain. I'm just kidding. I don't know it's hard to tell. It's a crazy world but I think he's doing just fine.

5) How do you measure success? Is it in Twitter followers? Money? YouTube views? Mentions on Perez Hilton? Or something else?
HM: Happiness. If you're not happy, nothing matters. Money doesn't matter, nothing matters. You've only got one life, and that's all you have to live. You can get all the money in the world but that doesn't mean that people are happy. For me in life, all I really want is to be happy. And I definitely am. What about you Spencer?
SP: Gold bricks. How many of them I have stacked up.

6) You guys have embraced your roles of villains. Did you feel like the time Americans spent hating AIG gave you guys a breather or were you feeling like you needed to step up your game to bring some of that negative attention back in your direction?
SP: Yeah, because I really want people to hate me as much as people who have taken people's houses and have cost people millions of dollars. No not at all. We're on a silly TV show about the drama surrounding he said-she said rumors and it doesn't even come close to stealing people's money. I wouldn't joke about that situation.

7) In regards to the negative publicity, in Dr. Drew’s latest book, The Mirror Effect, he calls you two supernarcissists, which he describes as people who put “themselves in our crosshairs, because for them being famous trumps every other motivator.” He adds, “By all evidence, Heidi Montag and Spencer Pratt of MTV's The Hills are two such supernarcissists. They appear fully aware that there is no such thing as bad publicity, and they're extremely calculating about what they say and do to provoke maximum attention.” What are your thoughts on Dr. Drew’s assessment of you?
SP: Since he's legally not my doctor, his assessment doesn't mean jack shi-at. Realistically though, he's right on. There's no such thing as bad press. You can call me a narcissist all day long in relation to fame because fame pays my bills.