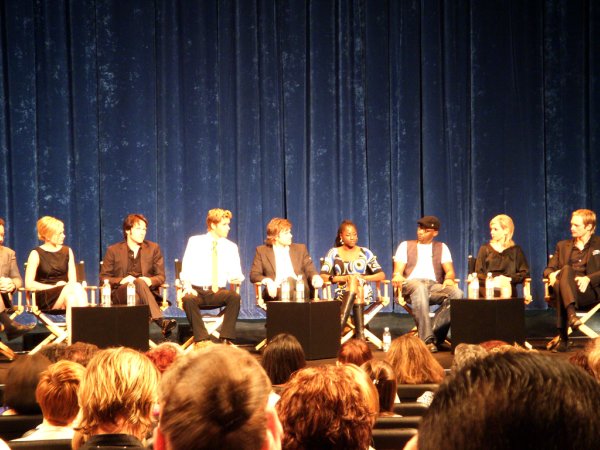 At 5 p.m. last Tuesday, the line for the True Blood panel at PaleyFest snaked around the Cinerama Dome toward the Arclight entrance. Many of the predominantly female fans of the HBO series had been camped out since early afternoon, traveling from as far as Texas and New York.

When the program began at 7 p.m. there were only a few empty seats toward the back of the balcony. The lights dimmed and, courtesy of The Paley Center for Media (formerly the Museum of Television and Radio), a 1967 excerpt from Dark Shadows - the cheesy low-production-values vampire soap opera - ran on the screen. The audience shrieked, although not half as much as they did when the highlights reel from Season One of True Blood followed, winding up with a two-scene preview from Season Two featuring telepathic waitress Sookie Stackhouse in peril, her vampire boyfriend, Civil War vet Bill Compton being dunderheaded as usual, and, best of all, a scary new supernatural creature!

The audience screamed again as the principal actors in the cast marched onstage. Alan Ball, creator of True Blood and the much-beloved Six Feet Under, explained that he was “sucked in” by author Charlaine Harris’ first vampire novel, Dead Until Dark, even though it wasn’t his usual read. He pursued the rights, and then HBO, until he got the green light on the series, which he noted has not yet been renewed for Season Three. “The best way to make sure this series runs forever,” he told the fans, “is to buy the DVD as soon as it comes out.”

Moderator Stuart Levine of Variety asked the cast how they got their parts and how they felt about their characters. Sam Trammell, who plays bashful bartender (and shapeshifter) Sam Merlotte, bashfully admitted, “I screamed like a girl” when he got back to his car after being cast. Rutina Wesley, whose work as Tara (a minor character in the books, but a major one on the TV show) impressed many, said, “Some of Tara’s life experiences are familiar to me.” Wesley’s Juilliard classmate Nelsan Ellis, who sashays through the campy role of Lafayette, commented that his character has made such an impression on people that they confuse him with Lafayette and “they take some liberties,” adding that he would only disappoint them, because “hangin’ with me is like watching TV and playing Scrabble.”

Anna Paquin, the Academy-Award winning actress who plays Sookie Stackhouse, who can hear people’s thoughts, said that people often yell at her on the street, “What I am thinking, Stackhouse?” Carrie Preston launched into a monologue worthy of her character, Arlene the redheaded waitress, who doesn’t want vampires around her “keeyids” (that’s kids, in Preston’s hilariously exaggerated Southern accent). The audience screeched when the tall, blond Swedish actor Alexander Skarsgard, who plays vampire Eric Northman, admitted that he is flattered by their attention, although he did not expect it when he took the role. (Eric is the books’ - the ninth is published on May 5 - sexiest man undead.)

The cast signed autographs after the event, moving around the Cinerama Dome stage to make sure everyone got their chance.

There was lots of joking among the cast members about the mens’ nude scenes and the “sock” they have to wear. Skarsgard commented, “I’m from Sweden, so I’m disappointed that I don’t get to be naked all the time.” In response to a question about whether he would wear the hot pink Spandex leggings that Eric wears in Living Dead in Dallas, the second of Charlaine Harris’ books, Skarsgard said, “If I can find an excuse to wear those, of course!” There were more goodhearted giggles about the scene in which the vampire Bill Compton, or “grilled Bill,” starts turning to toast from the sunlight. Actor Stephen Moyer quipped that his scenes as the damaged Bill were “quite a lonely time,” since no one wanted to stand near him or even look at the elaborate makeup designed to portray a crispy vampire.

Faithfulness to Charlaine Harris’ original plots and characters is a point of contention among some book fans, but Alan Ball made it clear that he loves Harris’ work, emphasizing that he thinks it is important to remain “true to the spirit if not the actual stories” of her books. In response to a question about actors improvising, Ball said that his initial reaction was “writer proprietary asshole behavior” at thinking the actors were rewriting his script. However, he said that once he saw and heard Nelsan Ellis improvising his first scene as Lafayette, the short-order cook, in the kitchen at Merlotte’s, he was so impressed with Ellis’ work that he has unbent on that issue.

And, in response to a common question about the graveyard scene - when vampire Bill literally rises from the grave to let Sookie know that he is still undead - Paquin said that, although they used organic peat moss for the dirt, the last thing she would be worrying about when she discovered that her boyfriend was not permanently deceased was “where the dirt might go.”

Season 2 of True Blood begins on HBO on June 14; the soundtrack to the first season will be available on May 19.