LAistory: The Garden of Allah 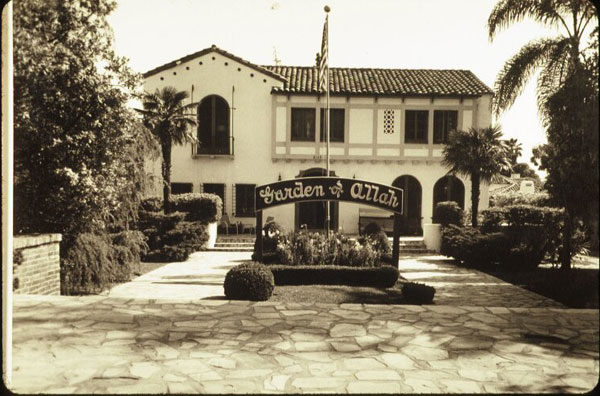 "Don’t it always seem to go / That you don't know what you’ve got / ‘Til it's gone / They paved paradise / And put up a parking lot"
—Joni Mitchell, "Big Yellow Taxi"

Urban legend has it that folk music legend and "lady of the canyon" Joni Mitchell penned her 1970 song "Big Yellow Taxi,"—an eerily cheerful lament about green space turning into concrete businesses—about something in Los Angeles that wasn't there anymore: The Garden of Allah. The accuracy of the urban legend aside, Mitchell did land on one truism never more true than in a city like Los Angeles: We don't know what we've got 'til it's gone.

A kind of paradise used to be at the corner of Sunset Boulevard and Crescent Heights. Built when Hollywood was young and in need of a playground, the Garden of Allah was a home, or a home-away-from-home for stars of the silver screen, the literary world, and the uppercrust.

The Garden of Allah began as the palatial home of Alla Nazimova, a star of the screen in the silent film era. (Reports vary, claiming she bought the house in 1918, 1919, or 1921). As talkies began to force many of film’s original luminaries out of the picture, in 1927 Nazimova was advised to convert her mansion and the two-and-a-half acres on which it sat into a business property that could provide her with income in her retirement. 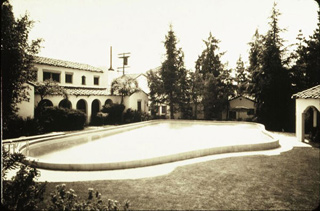 For sometime, this was the largest swimming pool in town. It was built to remind Nazimova her home in Yalta
Paramount Studios had bestowed Nazimova with the home and grounds when the star was at her apex so that she could enjoy a glamorous retreat in the burgeoning Hollywood community. A 1959 LA Times article discusses those early years:

To garnish the gift, [Nazimova] built Hollywood’s largest swimming pool—65 x 45 ft.—and had it shaped like the Black Sea of her girlhood. The pool hung like a dewy sapphire around the heart of her garden.
And when she made her garden over, Nazimova was bountiful. In the big revamp, she showered $1.5 million on the place, built 25 unique villas of Spanish design and packed tem with the last word in charm and fashion. (Swinton)

Nazimova was opening up the Garden of Allah (named as a play on her first name; the addition of the "h" to which it is rumored Nazimova objected) as a hotel, and when the grounds had their premiere party in January of 1927, Los Angeles was duly dazzled. One website, however, indicates that the ambitious property makeover sent Nazimova herself to the poorhouse, not the penthouse: “By the time she had completed remodeling the house and adding the bungalow complex in 1928 she was bankrupt and forced to sell out. Eventually she was reduced to renting a flat in one corner of her former home.” This could be why a 1930 LA Times article mentioned that "Central Holding Corporation, a recently formed syndicate of Los Angeles capitalists" were behind the purchase and some sort of construction of the property, with the following financial information: "The Garden of Allah Hotel at Crescent Heights and Sunset boulevards to cost $782,000" and "Garden of Allah Villa House adjoining the hotel, and costing $200,000” (Davis). 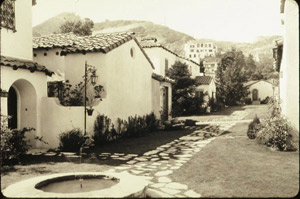 Many a scandal played out in these bungalows
No matter who was left holding the books, the Garden soon soared into popularity. Stars would spend their days by the pool or at the bar, enjoying the strolling troubadours providing musical entertainment. Many would set up a more permanent residence in one of the bungalows, particularly if they were part of a clandestine duo embarking on an affair. Area socialites would use the hotel and grounds for club meetings, debut parties, bridal showers, and weddings, all of which went on record in the papers’ gossip columns and social registries. Explains Steve Lee in an online article:

Some of the celebrities who visited The Garden of Allah were in town for films they were working on, some lived there long-term. Some were between marriages or homes; some were there for the parties going on from sunset until dawn. But whatever the reason for the visit, the Garden of Allah was an escape from reality for those whose job it was to provide that escape for everyone else.

The Garden of Allah made sense to Angelenos—adopted or otherwise—but to the outside world, perhaps it sounded a bit otherworldly. “I’ll be damned if I'll believe anyone lives in a place called ‘The Garden of Allah,’” Tom Wolfe said in a letter to author F. Scott Fitzgerald in 1937, who was one of the Garden’s most well-known scribes, having moved in during his screenwriting days. (He was also known to frequent Schwab’s drug store, conveniently located just across Crescent Heights on the south side of Sunset Blvd.) It was at the Garden of Allah where Fitzgerald met Sheilah Graham and embarked on an affair with her while his wife Zelda was tucked away in a sanitarium; Graham later wrote a book about the Garden of Allah. 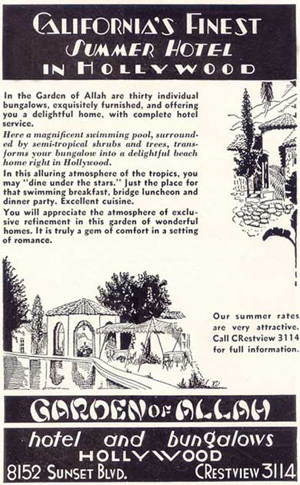 A 1930s print ad
The list of guests and tenants is the stuff legends are made of (although, as Los Angeles ages, our memories may find that these names have less and less meaning). Said Time magazine in 1959:

Through the late, intoxicated '20s and '30s, the Garden was more house party than hotel. Robert Benchley was resident clown; John Barrymore kept a bicycle there so as not to waste drinking time walking between the separate celebrations in the sprawling, movie-Spanish villas. Woollcott, Hemingway, Brice, Olivier, Welles, Bogart, Dietrich all lived at the Garden during its green years.

Add Gloria Stuart, Dorothy Parker, Errol Flynn, Greta Garbo, the Marx Bros, and Francis X. Bushman to the roster, and you can imagine just how popular and, well, trendy, this place was. Adds Walt Lockley in another online tribute:

And hundreds of other names [than those often mentioned] maybe, who knows. Not everybody who went to the Garden of Allah wanted to be seen there. Somehow, among the tangle of phony marriages, the fist-fights, the volume of liquor especially all through Prohibition, high-powered and insecure and spoiled celebrities, tons of recreational sex, other tons of drugs, robberies, drunken rages, cross-gender liaisons, the black frustrations of writers (and others) having their souls eaten by the Hollywood system, orgies, more robberies, simmering feuds, money problems and sudden changes of plan, the Garden of Allah acquired a bohemian reputation. A reputation for hedonism. Imagine that.

And while Nazimova returned to her modest on-site apartment in 1941, living there until her death in 1945, the Garden of Allah soon began to lose its charm. One reason for this is that Hollywood became less transient in the 30s and 40s, as the post-silent film era proved to be something worth pursuing, and sticking around for. Stars made the move to Los Angeles permanent, and luxurious new neighborhoods and cities, like Beverly Hills, saw the construction of mansions the stars could call their own. Who needs a hotel to hide away in when you could hide away behind your very own tall gates?

Another online story about the Garden discusses the demise of the property:

As Hollywood grew, the studio era began to wane and the city eventually surrounded the Garden of Allah. The real estate it was built on became more valuable as commercial property than the hotel itself. The hotel became seedier and the new stars, such as Montgomery Clift and James Dean, stayed at the nearby Chateau Marmont, which afforded more privacy and less chance of encounters with the less stylish transients who increasingly occupied the neglected villas at the Garden of Allah

In 1959, the Garden of Allah came to its official end. Francis X. Bushman, onetime resident, appeared at the closing party, but of course, nothing was the same. Eager souvenir hounds gathered at an auction that sold off the furnishings and other items from the property. They were clearing out to make way for the greatest destroyer of romantic notions: The wrecking ball. 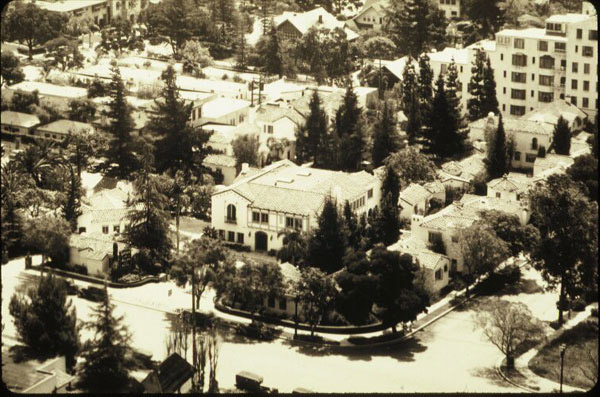 South-Southwest view of the property as it was.

Lytton Savings and Loan had bought the property, and had plans to turn the corner of Sunset and Crescent Heights into a business center, anchored by a bank and a tower. The $5 million Lytton Center was pretty typical stuff of the late 50s and early 60s in Los Angeles in terms of business and architecture. Said Bart Lytton, Lytton's President, of the plans: "We have approached out site planning from the point of view of creating a beauty spot at this important intersection, rather than from how many square feet we can cram on the lot" ("1st Phase"). That tower, by the way? Never happened. 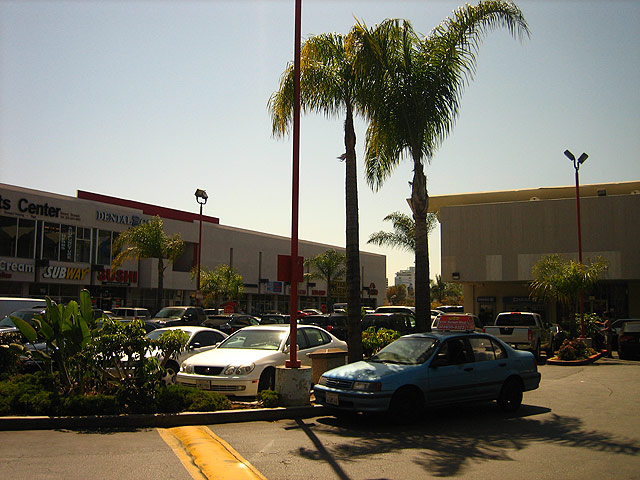 And there is nothing lovelier than a parking lot, now is there? Perhaps this is why Mitchell mourned the paving of paradise in favor of a parking lot--here, or, anywhere else for that matter. As anyone who rounds that corner knows, Sunset and Crescent Heights where the Garden of Allah once stood, boasts a strip mall, and a bank branch (very, very, very recently re-christened as Chase, after many previous incarnations). There's nothing there to suggest anything else ever was, which up until 2007, wasn't the case. There used to be a model of the hotel on display outside beneath a glass bubble, which eventually moved inside the bank, and then...disappeared. Not even the replica of what was there is there anymore. 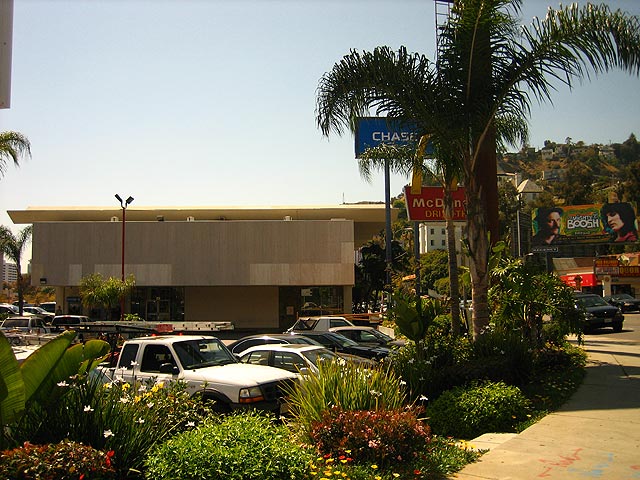