Meet Erika of The Heartless Bastards 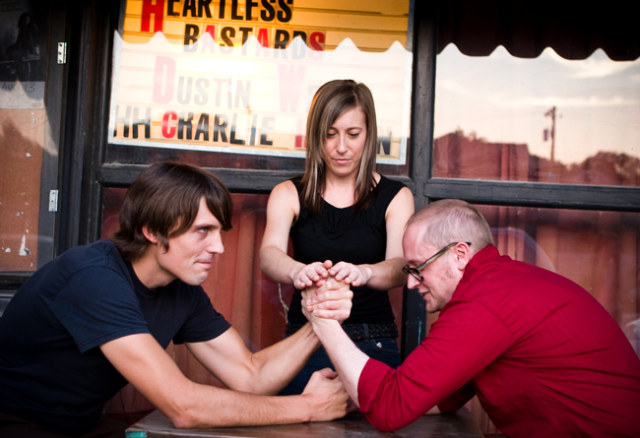 Erika Wennerstromon is an enigma. Raised in Ohio, the lead singer of The Heartless Bastards now resides in Austin, where she writes the music she herself has trouble pegging down into a certain category. The blues/rock/etc/ inspired sound of their newest album, The Mountain, has received rave reviews. It strikes a more complex tone than their two previous albums, raw works of art that spoke to their mid-western roots. While on tour through the U.S. (and as they approach their Los Angeles show on April 21), Wennerstromon took some time to talk about music, life and the commercialization of rock 'n roll.

Congratulations on the new album. How are you feeling about how it came out?

It's sort of a departure from All This Time. It has a more upbeat feel. Talk about the difference between the two albums.

I guess I just play songs and figure out what works with what particular song. As far as the differences, I don't know, I just think it was a different time in my life.

Do you write the songs on your own?

Yeah, I write them on my own and then bring them in [band mates] because I just always felt more comfortable doing it that way.

Your lyrics are very personal. Is it strange for you to have your diary out there, so to speak?

Its nice that people sing a long and stuff. But they might find different things than I do. Even the fact that they are getting something out of it is a nice feeling.

You started anew. You have a couple new band members, you moved to Austin from Ohio. Yet you still have the same sound as before. So, what has changed for you musically and personally?

Well, I've always written songs myself and then bring them in the studio. And the band I recorded with is not the same band I'm on tour with right now because I haven't put it together yet. But I'd like to continue to work with the band I have now and on albums as opposed to just a touring band. So, we haven't gotten to the point of working on new material yet.

And personally? Have things changed for you how you approach music?

No, I tend to always write songs the same way. When I finish an album, I always tend to give songwriting a break. I'm not a prolific person; I don't constantly write. I gave myself a break in between albums to make sure I don't try and force myself to write songs. If I don't end up being productive, its better for me to give myself that break. And in terms of songs, they find me. They'll start popping back in my head and i'll start working them out. That's really what I've always done, so I don't know if the process is different. My life is different, but not the way I approach music.

Possibly sometimes. Sometimes there are things that might be too personal to express without using some sort of metaphor.

Have you been approached to sell your music commercially?

Yeah, we have a song in Friday Night Lights, the TV show. We have a song Black Snake Moan, the movie. For me, as a songwriter, I just want my music to be heard by as many people as can hear it. Putting your songs in film and media, it's just another way to get your music out there for people to hear it. As long as the place doesn't go against some sort of belief you have, I see it as an opportunity to help any musician financially continue to create without trying to balance bar tending or whatever any kind of jobs are out there. We've had some of those opportunities on the last album, which allowed me to survive as a musician. I'm all for it as long as it's nothing that goes against any beliefs I have.

What would be an example of a company that goes against your beliefs to whom you wouldn't sell? Are you talking about a WalMart or something smaller?

Yeah, that would be a prime example. I kind of think WalMart is kind of evil. I wouldn't put my song in the Republican Convention. I don't even know what I am. I just go with who I think will do the best job and that never happens to be the Republicans.

Does it trouble you that your music might be aligned with a certain product? And does that play into the decision of whether or not you want to license yourself to them?

Not really. I remember The Walkmen having a song in a car commercial, but it's not like I forever think of The Walkmen as...I don't even remember what car commercial it was and that proves it right there. When I hear their music, I don't forever tie them to that band.

You guys have achieved more fame than before. How are you guys handling all that and was that something you wanted to achieve?

Everything's going good. We're just grateful that everything has been going really good. I've kind of quit reading [reviews] anymore. Even if it's positive, I just figured it's something I shouldn't do. But I know we have a lot of extra press and I'm just really grateful for it.

You mentioned you don't read reviews. But I was wondering if you would comment on the 6.5 review from Pitchfork for The Mountain.

Oh, I don't know. I don't think we've gotten that much support from Pitchfork. I'm OK with that.

Does it bother you that people deride your music?

Any review comes down to somebody's opinion. Pitchfork is as entitled to their opinion as anyone else. It's not like I should tell them they are wrong or right, it's just an opinion.

Have your fans changed at all?

A lot of people said they saw us on Letterman, but it seems like a lot of them who said that were familiar with us already. I think every time we go through the south, they refer their friends and everything adds up. Someone may have seen us on Letterman, or someone may have seen us at the Black Keys thing and someone may hear about us when this article comes out, so it's never one thing. It's a combination of thins and a lot of work we've done throughout the years.

How was it being on Letterman?

It was really surreal.

Was it weird to play in front of a guy who probably doesn't listen to your music?

Well, I don't know how old he is, but he probably doesn't listen to that much music anymore. Maybe he does. No, it's not weird. I've been interviewed by people who have probably never heard our music before. It was cool to do it and be able to say I did it.

What are some of the more memorable shows you've done?

Thee are so many great towns. Some of my favorite...we opened for Lucinda Williams at Radio City Music Hall. That was pretty cool.

A place like Radio City has union people to move the equipment. That's not a bad thing. But if you want to move the microphone stand even one foot you have to ask and point it out and have someone do it for you. It's just how it is, but that was my first experience with that so it took me a bit to get used to. We played a really fun show in Elephant Springs, Miss. That was really fun. It was totally wild and everyone was drunk and singing along. I don't think a lot of music comes thorough there so they were really enthusiastic.

How do you feel about being on the same label as Al Green?

I think it's great! I think it's really cool we got his entire catalog. I love AL Green and really happy for Fat Possum [Records]?

How do you feel about being on the same label as Bob Log III, who wrote 'Clap Your Tits'?

He's so entertaining. I saw him recently. He had an inflatable raft he got in and the crowd would pass him around. I like Bob Log a lot.

I've never seen you live. Tell me about your live shows. What are they like?

Well, I'm sure it's different for each person, but I think we're a pretty rockin' band. God, I don't know how to answer that. We're just out there playing. I guess I would say we give it our all.

Do you talk with the audience?

I usually don't say much. I'm kind of shy. If something pops in my head, I'll say it, but I don't feel the need to talk just to talk.

How did you overcome your shyness to sing in front of people?

It's been a long process. I still get really nervous before shows, but not nearly as much as I used to be. I just felt like I can't let that get in the way of something I've always wanted to do. I just forced myself to bear it and its kind of gotten me here in time. I also played bass in a band for a while and that...helped.

Do you have any rituals before you go on stage?

Not really. I generally have a beer and a shot of Jameson.

Are you working on any new songs yet?

I have a lot of new songs in my head. Id like to start trying to work on them a bit more, but we are doing a lot of touring and it's kind of hard to do that on the road. But I need to take a little break. We get back from the tour on mid-June and think I get back in mid-August, so I will have a good month there.

Can you tell us about them?

They are kind of all over the place. One of them is inspired by Bruce Springsteen and another is kind of mellow, blues song. They might end up taking me in a complete different direction once I get in the studio. My inspirations are always all over the place.

Where does the name 'Heartless Bastards' come from?

I was at a bar I used to work at and there was one of those bar-top screen games. There was a music trivia game and one of the questions was what was Tom Petty's backing band named. Tom Petty and the Heartless Bastards was one of the wrong choices and I thought it was funny.

Well, that's a good place to end it. Thanks and we look forward to seeing you in L.A.

Thank you. You take care.

The Heartless Bastards play Spaceland on April 21. Buy $12 tickets here or pay $14 the day of the show.