Captain Keith Colburn of The Wizard
As part of Discovery Channel's "Alaska Week" of programming, tonight at 9pm is the season premiere of "Deadliest Catch" and over the past four seasons we've seen some incredible sights as these brave men harvest the King and Snow crab we, in the lower 48, love to nosh on while sitting in our warm, safe, and cozy restaurants and houses. To say that these guys have a dangerous workplace is an understatement - every season of the show has included footage of injuries as they happen as well as reports of other vessels sinking with men losing their lives in the frigid waters near Alaska's Aleutian Islands.

Captain Keith Colburn owns and skippers the Wizard, one of the larger vessels in the series. We had a chance to talk with him by phone while he was finishing up a promotional tour for the season premiere. Be sure to check out his website and blog which includes a full history of The Wizard as well has his recent testimony before Congress to discuss the impacts offshore oil drilling could have on the fisheries around the Aleutian Islands.

Captain Keith is on the cutting edge in many respects: he's a blogging crabber, he has a love for modern communications equipment, he sees the effects of global warming firsthand and is sensitive to them, and he's doing his part in an effort to mitigate the effects of global warming and preserve the environment by educating people and politicians about how fisheries work.

Listen to the entire interview here:

LAist: We noticed you were in Washing DC to testify before Congress

Captain Keith: I was testifying about oil exploration on the outer continental shelf. I'm not completely opposed to offshore oil exploration but there are sensitive areas including the bay in which I fish.

LAist: "Deadliest Catch" is all about the immediacy of being out on the boat and fishing
but there's a lot more to it than that isn't there?

Captain Keith: We are out on the water fishing for 6 months out of the year so I have a lot of people say to me, "Oh wow, you get 6 months off" and that just isn't the case. In the off season we have a lot of administrative work: licensing, permitting, getting the boat ready, and for some of us we take the next step - we get into the politics of the fisheries. You don't just throw your line in the water and hope you catch something. There is a very complex set of regulations around the fishery and I'm very involved in that. 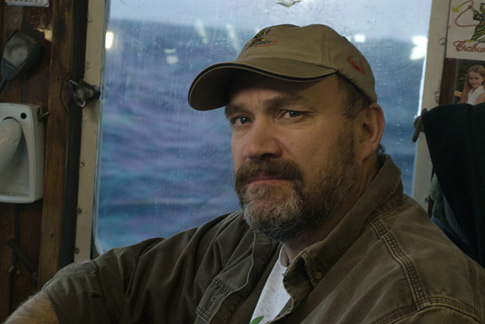 Captain Keith Colburn of The Wizard

LAist: Right now the country is in a huge downturn economically. How is this affecting you?

Captain Keith: We're exposed to the elements and everything else out in the water but we are also exposed to this whole financial situation as well. It takes a lot of money to go out on the water and that has definitely affected the fishery. It's not just limited to the US, over 50% of what we catch is sold overseas and if there is some kind of economic situation outside of the US, that affects us as well. What we do have going for us is that this is good food, good protein, seafood, wild caught, and people really want to eat it - this is perhaps one of the ways we are sheltered unlike other industries.

LAist: You don't really get any kind of government help though, like dairy farms or corn producers?

Captain Keith: There is absolutely no protection for us, no subsidies. There is no one there to bail us out, the only people to bail us out are the crew when we take on a bit of water.

LAist: So I'll be writing this up for a blog on the internet, what kind of access to communications do you have?

Captain Keith: During my career of 24 years, we've gone from the difficulty of getting your position on the water using radio and other older instruments to using GPS, I also have email capabilities, phone capabilities, and a kind of a walkie-talkie communication with anyone on the mainland. It depends upon what you're willing to spend - we could really plunk down a lot of money to improve them even more, we're talking tens of thousands of dollars. The Bering Sea used to be this infinite body of water but it's become much smaller because of developments in technology over the last decade and a half.

LAist: Has this helped improve safety?

Captain Keith: We can track weather a lot better but the fact of the matter is that we're several hours off shore and whatever Mother Nature wants to unleash upon us we have to take it. It's not like we can pull into the garage and hide out - we're stuck out there.

LAist: Do you encounter people who are ignorant about where their food comes from? Perhaps people who even have a political agenda about what you do?

Captain Keith: Everyone I've met because of "Deadliest Catch" has been in awe of what fisherman do, whether its what I'm doing in Alaska or another fisherman shrimping in the Gulf or off the East Coast. People are becoming more aware of what it takes to bring fish to the table. People are also becoming more aware that we're not just doing the rape-and-pillage thing - we care about maintaining a sustainable fishery, we care about the environment, because we want to preserve it for our kids and our kids' kids. This awareness has been a huge plus for everyone in our industry.

LAist: Have you seen examples firsthand of environmental abuse, whether its fisherman or another industry?

Captain Keith: As fisherman we're becoming a lot more aware of our environment over the last several years and we're trying not to make a buck, we'd also like to make an impact. Have I seen grotesque abuses? I'd have to say no. You have to remember that we're an industrial fishery - am I a polluter? Yeah, absolutely. Do I like it? No. Will I do what I can to minimize that? Without question. But if you're talking about a "let's go out there and slay everything and be damned", that doesn't really exist in the Bering Sea. Everyone in the fleet is very professional and very aware of what they're doing. My wife was doing environmental models and climate change at UC Santa Barbara, so it's something that I am personally very concerned and aware about.

One question you didn't ask that I get all the time is "how does it feel to be a celebrity?" but I'm still a fisherman - at the end of the day the show isn't there so I still need to make my living as a fisherman. But the incredible thing is, I was just in a gallery in New York with my wife, and we're standing in front of an Andy Warhol painting and my boat called me from the middle of the North Pacific to tell me that they were on their way home. I'm standing in front of this amazing piece of pop-culture and I can be on the phone with my boat and crew. The 21st century is a pretty cool place to be living.

"Deadliest Catch" has the premiere of its 5th season tonight at 9pm on the Discovery Channel. You can read more about Captain Keith at CrabWizard.com