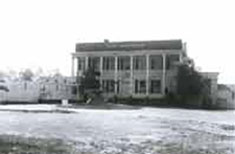 from City of Culver City's website
After Fatty Arbuckle's career was deep-sixed by one of the biggest scandals of its day, he tried his hands at a few things, not the least of which was Fatty Arbuckle's Plantation Cafe. Built at 11700 Washington Boulevard in Culver City, across the street from the site of Arbuckle's elementary school.

Lavishly decorated by the head of the MGM art department, the cafe opened in 1928 with star studded fanfare, performances by the Talmadge sisters and was part, along with the Cotton Club, and King's Tropical Inn, of the hopping Culver City club scene. Culver City was close to the coast — convenient for the bootleggers to bring in their wares. The clubs drew the non-famous in hopes of of dancing side by side with the stars while listening to the Henry Halstead Orchestra.

On opening night, the club's name was spelled out on the front lawn in flowers and Arbuckle himself was presented with a life-sized statue of himself made entirely of blossoms by Mabel Normand (it was her last public appearance). Numerous luminaries were attendance, including Charlie Chaplin, Mary Pickford and Douglas Fairbanks, Bebe Daniels and Buster Keaton. Arbuckle performed to the delight of the full house -- and continued to do so on a regular basis.

Los Angeles is a fickle town and when the stock market crashed in 1929, the Plantation Cafe suddenly found itself empty as even the rich and famous stayed home and pinched pennies. Arbuckle sold his interest in the restaurant and nightclub and went east to New York, where he died three years later. Arbuckle may have lived a substantial amount of his life in undeserved infamy, but he left us with many gifts, including being a big part of the original Sunset Strip (the real thing was still a dirt road) -- when it was in Culver City.