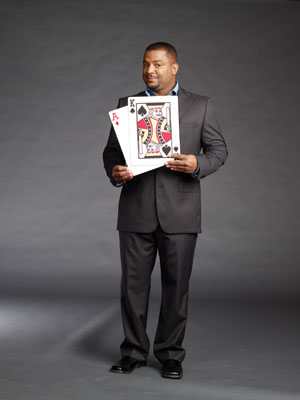 Alfonso, who was first spotted dancing with Michael Jackson in a Pepsi commercial in 1984, is probably best known for working alongside Will Smith in The Fresh Prince of Bel Air where he played Carlton Banks. The actor/dancer also played Rick Schroder's best friend on the early 80's sitcom Silver Spoons and shared the screen with LL Cool J from 1996-99 as Dr. Max Stanton on In the House.

Alfonso who tells LAist he's "making it happen; every day, every dollar, one at a time" can now be seen on on GSN where he hosts both GSN Live and the game show Catch 21, which enters its second season tonight at 7:30 p.m.

1) What drew you to GSN?
There was sort of weird start to this. Basically, Scott Sternberg and Merrill Heatter, the creators of Catch 21 decided that they didn't want to go with the traditional game show host. They didn't want to go with your typical game show host. They started looking for different people. Somehow they got to me and they decided that it would be kind of cool to bring me in and see whether or not this was something that I would enjoy and was it something that I was good at. Over the period of about two weeks, I met with them a few times and it got pretty good. I decided, 'Wow this is something that is interesting, cool and fun to do.' I really enjoyed doing that first season of Catch 21. From there I came on to promote it on GSN Live and thought, 'Wow this is kind of fun too.' So this whole world opened up for me. It's something that I never thought I would be doing. I found that this was something that I was comfortable with and pretty decent at doing. We just did our second season of Catch 21. The show is bigger, better, more interesting. The drama is higher. We had a lot of fun. It's a great second season and I'm very proud of it.

2) You got started in showbiz at a very young age. Since you've been in the business for so long, did you ever think of doing something else? Did you ever think about walking away and doing something else?
I think that in life there are certain things that you are good at and certain things that you're not good at. There are many different areas of the world that I can get into and work but realistically I am a show business kid. This is what I do. I grew up doing this and this is what I love. I've quit probably twice in my career from show business and ended up going right back to it because it's truly what I enjoy doing. I feel like there's a lot that I could do outside of show business, but there isn't much that I'd actually want to do. This is the business that I enjoy. I love to perform and I've been doing it for 30 years and feel like I've got a pretty good handle on things.

3) How did being a showbiz kid impact your childhood? Were you able to have a normal childhood?
What is a normal childhood? That is really the ultimate question. It certainly wasn't a normal childhood in what most people would consider normal. Yeah, I was famous and so going to a regular school was out of the question. Being the little famous kid at school certainly wasn't fun. So there's been positives of my career and there's been negatives of my career. I didn't get that normal childhood. I didn't get to go to the high school football games and root for the home team. All of those kind of things were not a part of my life but there were a lot of very cool things that were a part of my life. Everything in life is a trade off. Yes, I missed out on certain things, but I also gained so much more in other ways.

4) What for you was the 'I've made it' moment? Was there that one moment, where you knew everything in your life was going to change? Was it the Pepsi commercial with Michael Jackson?
I certainly wouldn't say that there was one moment but there was one year that everything in my life changed. I starred on Broadway in The Tap Dance Kid, the Pepsi commercial happened then I moved on and started doing Silver Spoons. All of that happened in one year. So for me it was 1983-84. That was the year that every thing changed for me.

5) What are your thoughts on Internet video? The Pepsi commercial, the "Breakin' and Poppin'" commercial and the "Carlton Dance" are all hugely popular on YouTube and other video sites. You're probably not making any money off of that, but is it good to see how popular your videos are despite the fact that there isn't any money coming your way?
Interesting question. The reality of it all is that part of the reason why I am still around in this business today is because of some of that. It has continued to put my name and my face in people's mind. So, there's a certainly a positive in that. The negative as you were just saying is that we don't get paid for any of that. The real problem though, is that I can't do anything with that content. Whereas people can post those videos and have fun with it online and other venues, but I can't create anything from it because my likeness from those times are owned by other companies like Warner Brothers. They won't let you do anything with it. I've got a t-shirt that is being sold at Target that I don't get paid for. So those big companies that own the rights to those things limit your ability to make a living off of those things. When it's your own face and you are not getting paid for it; they're making money off of a picture on shirt that is your face, personally, I think that is unfair. So like I said there are certainly positives in all of that because I'm still popular because of it, but when you cannot make a living from it and there are companies that won't allow you to make a living from it, because you can't be creative and create new and interesting ways of packaging yourself is very frustrating.

6) What was your initial reaction to the t-shirt?
My initial reaction was 'What the hell is that?' I thought 'How the hell is that possible?' A buddy of mine sent me a picture in an email of some dude walking down the street wearing the shirt. I guess initially it was sold at Urban Outfitters, so maybe about two years ago was when it first started. After doing some research I found out that basically I don't have the right to get paid from it. Every time I see the shirt, I would suggest that people don't run up to me and say 'Look at my shirt' because I am not very happy with the companies that are doing it. If it was my shirt and I was putting it out there, that would be cool, but somebody selling my likeness and me not having any financial upside to it is certainly not cool with me.

7) You've starred in and directed several sitcoms. Sitcoms have been a big part of your career. Why do you think the genre is fading away? What sitcoms do you watch?
You know, the sitcom is coming back actually a little bit. Most of the networks have ordered a bunch more sitcoms. To be 100 percent honest with you, I think that "Must See TV" which NBC ran for years, killed the sitcom. It killed it because they continued to put out the same shows over and over again to a group of people that don't watch network television. White yuppie America doesn't watch network television. They watch HBO. They watch Showtime. They watch FX. They watch the History Channel. They watch National Geographic. They're not watching regular network television. But they continue to make shows for those people and the numbers continue to drop. They continue to push to a certain group in America that was themselves, but they don't watch television, themselves. It killed the genre. The genre will come back if they start to make sitcoms for the people that are actually watching network television. There's a reason shows like The Jeffersons can run for 14 years, or shows like The Cosby Showor Roseanne or any of those other long running shows that were made for regular middle America people. You have to sell it to those people. To be honest with you I don't like any of the sitcoms that are out there right now. I don't watch any of them because they are not directed towards people like myself. There's nothing to watch.

You can watch Alfonso Ribeiro tonight on the season premiere of Catch 21 at 7:30 p.m. on GSN