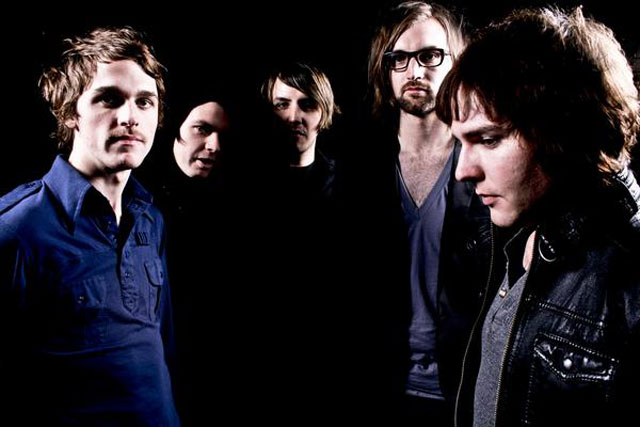 Photo by Forrester via the Republic Tigers' MySpace.

You don't often hear of grandiose, lush epic pop coming out of Kansas City. That is usually Britian's department, what with their Snow Patrols, Elbows, Guillemots and Coldplays. However, Kenn Jankowski, is currently making music that would make Chris Martin green with envy.

Keep Color, the Republic Tigers' debut disk has been attracting attention since it's release in April of last year. "It’s a sound that’s half organic and half synthetic, kind of like how all our lives are now,” says Jankowski. “It’s the common theme throughout all of the songs and we tried to approach it audibly as well.” Jankowski was kind enough to speak to us this weekend before the Republic Tigers show Wiltern this Friday night. Here is some of what was said.

What made you pick up an instrument?
I was fourth grade, so however old that is. Nine? I played the trumpet.

How long did you play?
Oh, I still play! I played the trumpet and trombone on the album. I kept playing through high school. When I was seventeen I picked up the guitar.

That's fantastic. Do you ever play the trumpet on stage?
(laughs) Nah, it gets in the way of the singing, but maybe I'll write some solos in next time around.

How did you guys get together?
I’ve known Adam for quite awhile. A decade, I think. The Republic Tigers was formed after my band before this one, Golden Republic, broke up, and I started looking around for guys. It took around six months.

Yeah, but you know we never said it was tryouts. I just got together with the guys and talked about music. Once Adam was involved though he really helped shape the sound.

I heard that Republic Tigers is the name of your high school team is that true?
I went to school in Republic, Missouri and our team was the Republic Tigers. I just always liked the sound of that.

Were you an actual Republic Tiger? Did you play sports?
Yup, I played football for a little while. Actually I was in the marching band and on the football team.

How the heck did you do both?
I marched in my football uniform. It was tough. It was especially hard because I was the altenate drum major. When I was on the bench I would run over to the woodwinds who couldn’t see the drum major and give them the tempo.

That's insane.
Especially since I wanted to be as unique as possible. that was during my vampire phase. I was really into Bram Stoker's Dracula and Interview with Vampire, so I would adopt this Dracula posture with a ponytail on top of my head. I looked nuts. I hadn't really found myself, yet.

When did you study?
Oh, I didn’t. I just barely passed.

What inspired Buildings and Mountains?
That's actually a Golden Republic song. It's one of the last songs we wrote together. Ben wrote the lyrics and I wrote the music. It was really inspired by this road trip we took to Colorado. The mountains were so beautiful. The song is really about the combination of nature and human technology.

What is your writing process like?
We try and make it different every time as much as possible. The latest song that we're working on, I wrote the lyrics without having any music. We just had bits of melody that we were trying to fit on the lyrics. It's really interesting.

Keep Color is really grandiose and lush…almost like a movie soundtrack. Were you inspired by any movie soundtracks making this album?
We all are. It's the common thread musically throughout the band. We all write like we were writing for a movie.

What inspired Fight Song?
That song wasn’t inspired by a scene or movies or a soundtrack. That one was inspired by the kind of music you hear at a foot ball game. A fight song is what the marching band calls their theme song. It's a song that has a very competitive theme running though it, although though there are so many analogies.

What is your favorite thing to do in LA?
I love going to the beach there. Oh and we always like hanging out with the label (Chop Shop Records). We don’t get enough time together in person.

Is it weird watching your music in the background of TV shows? I would imagine on one hand it would be awesome, but on the other totally surreal.
Oh, it's all awesome. It's all very, very awesome. Alexandra Patsavas, who owns our label, also does music for a lot of the TV shows. I think the coolest thing though was when Buildings and Mountains was on Chuck. The scene that it was playing in had a lot of dialogue in it while I was singing. It was almost like I was having a conversation with all of these people.

What was the worst show you ever did?
Oh man, it was in a coffee shop in Kansas City. It was back when we were a young band just starting out. It just wasn’t put together very well. We couldn’t drink at the show. Mark fell off the stage. I guess I didn't take it very well because a couple people thought I was a jerk afterwords. Hopefully I've straightened out after that, but man it was terrible.

If you could sing one song with anyone in the world what would it be?
Always wanted to work with Dream Theater producing a couple songs that were actually listenable. I want to take the cheesiest band in the world and make a great song happen. That would be a challenge worth taking on.

Do you have a favorite local band at the moment?
Cowboy Indian Bear, they're from Topeka. They're great.

What's up next for you guys? When are you recording next album?
Oh we record demos and things any chance we get. We did our first record entirely ourselves.
We try and write all the time though because you never want to be in the position of not having any songs when we’re asked to start recording. It's very stressful to have deadlines, so this is our way around it.

Finish this sentence: If you’re in Kansas City you simply must…
Stay for a week. You’ll need a week to do it all. There is so much good food and bars and all that. There are too many things really. Oh wait, and get Kenn Janowksi’s phone number and come over to his house and play video games. It’s the best thing in the world.

Well thanks for talking to us.
Thank you!

Be sure and catch the Republic Tigers and Travis on Friday night at the Wiltern. Doors open at 8pm.