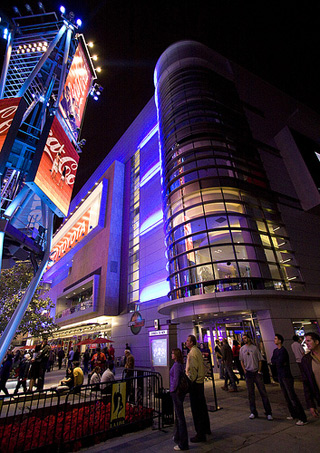 ESPN's new West Coast Studios hit the airwaves today from Downtown's LA Live. The studios are part of Phase 2 of the campus, and join their sports-themed restaurant in Phase 1 (pictured). Photo by Michael Zampelli/LAist
Commence humming the theme to ESPN's beloved SportsCenter...NOW.

Today is the day, sports fans, when the long-standing cable network opens their "12,300-square-foot studio today in the middle of LA Live, the entertainment complex across the street from Staples Center," according to the LA Times. And tonight, from Los Angeles, they will be broadcasting SportsCenter from the new studios, sparking hope that this means the network will hone in on more West Coast sporting events in their coverage.

As part of the new LA Live campus digs, ESPN is now in command of "three production control rooms, two master control rooms, a newsroom-screening area, eight editing suites, a music room, a radio control room and studio, a voice-over room and two studios." A nice score for us, as well: "The Los Angeles studio is the first in the world capable of 1080P production," which is the best resolution for HD broadcasting available.

As excitement builds for tonight's launch, audiences wonder how "LA" SportsCenter will be. Execs were cagey on the details: "Facility General Manager Judi Cordray told the channel's home town Bristol Press yesterday that the broadcasts will have a special L.A. feel to them," reports Blogdowntown. Codray says: "You will know that [SportsCenter is] being broadcast from Los Angeles.”

ESPN's studios follow on the heels of the recent opening of their ESPN Zone restaurant at LA Live, feted in January with a red-carpet grand opening.