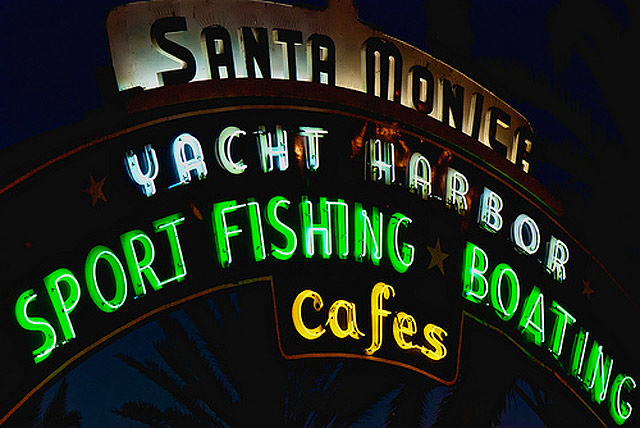 Photo by dtaylor123 via the LAist Featured Photos pool on Flickr

There are plenty of ways you can reach out and connect with Los Angeles' vast and fascinating history beyond the confines of our weekly LAistory column. Whether it be through joining a preservation group, taking a walking tour, visiting a museum or historic site, or opening up the pages of a book, LA's stories are often within our grasp. For LAistory, while we like to do the writing and photo-taking (or finding) ourselves, we, too, draw inspiration from our interaction with the city's resources, which is why LAistory is taking a brief pause today to give a shout out to a couple of publications that give us—and can give you, too—a better understanding of where we are and where we came from.

The first is a new release from the wonderful folks at Angel City Press. James Harris' Santa Monica Pier: A Century of the Last Great Pleasure Pier is a colorful exploration of one of the county's most recognizable recreation destinations. Starting back in the days when Santa Monica had high hopes of becoming the sole and most significant port to serve the booming and blossoming nearby city of Los Angeles, Harris takes the reader through one hundred and more years of the Pier's life in an engaging and revealing manner; to read through the glossy pages is as comfortable and delightful as the way in which the bright blue Pacific laps at Santa Monica's sandy shores on a mellow summer afternoon. 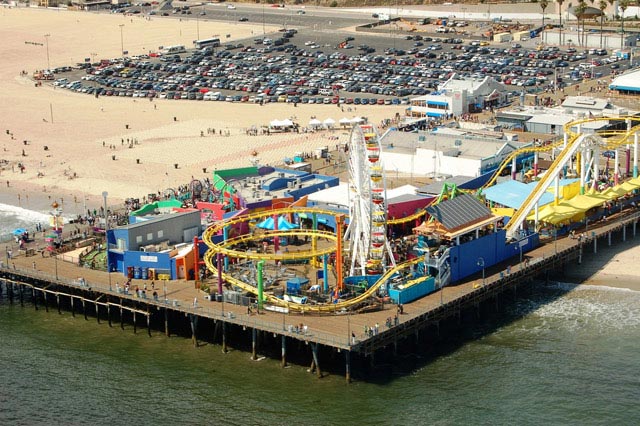 Although in recent years the Pier's ferris wheels have been the subject of chatter--and an eBay auction--Harris takes us back to the early 1900s, when amusement park visionary Charles I. D. Loof heeded the cries of the locals who wanted such an attraction, and gave them their "pleasure pier." Yachting, fishing, ferocious storms, and preservation movements are all explored in the text, but--much like a day on the Pier itself, there's never a dull moment in the book, as it's filled with hundreds of wonderful photographs, vintage postcards, and quirky tidbits about pop culture icons and events that are tied to the Pier. Those for whom the Pier is where they've enjoyed a concert, a stroll, or a large-scale event like last year's GLOW will enjoy this as much as veteran Pier enthusiasts.

The next pick is an oldie, but--since everything old is often new again--a reissue has made it new once more. First published in 1971, critic and professor Reyner Banham's Los Angeles: The Architecture of Four Ecologies is as ahead of its time as it is a product of it as well. Banham's bemused, irreverent, and ground-breaking look at Los Angeles vis-a-vis its buildings, from the sublime to the downright garish, actually sent out the call for people to stop dismissing LA as culturally insignificant.

It is hard to match strides with the wonderful write up of the reissued edition by Ariel Swartley in last month's Los Angeles magazine, but the tome itself--a 1976 Penguin books edition I picked up from the CSULA library recently to read and check off my list of LA-based must-reads--has been both in my hands and on my mind since before her article came out cheering the reissue. 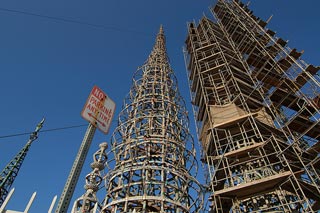 What would Banham say about the Watts Towers today? Photo by hinducow via the LAist Featured Photos pool on Flickr
Banham's style borders on the esoteric; neither purely academic or simply colloquial, Banham is unapologetically Banham: an outsider looking into Los Angeles' outsides. He looks at how we live the way we live and ponders why, by looking at our daunting Cloverleaf-patterned freeway interchanges, restaurants built to resemble Tahitian huts, Disneyland's attractions, or the light and lines of the work of mid-century modernists like Neutra and Schindler. Fast food, planned communities, shopping centers, vast links of concrete freeways, and the aesthetics of the quirky are all pointed out and taken at face value--then taken to their core.

Although Banham's predictions and visions (the most chuckle-worthy being that he thought we'd move ourselves daily from Burbank to the OC via airplanes by now) are sometimes laughable, many are practical and our realities. The crisis of our landscape, population, and transit system is very real, and his almost 4-decades-old take on the topics remain fresh and eerily accurate. His take on Downtown, mind you (Chapter 10, called "A Note on Downtown" begins: "...because that is all Downtown Los Angeles deserves.") is mockable now, in the era of the Edison, the Biscuit Lofts, Art Walk, and the Nickel Diner--to say the least--but is also exactly what many did, and still do, think about our city's shaky core. His worship of Rodia's Watts Towers is curious, but his lament over the loss of the city's once-phenomenal Red Car public transit lines no laughing matter, since we have been for the past twenty years trying to reconstruct what we worked so hard to obliterate more than 50 years ago.

Banham's Los Angeles is a fun and informative read, peppered with black and white photographs of the very landmarks (and unremarkable) he references. After reading this book, your commute on the 405 with a pit stop at a Jack-in-the-Box drive-through from your office building to your funky old apartment building, may suddenly look very different.


This is a 1972 BBC documentary about Banham in Los Angeles. (It's a long one...but you can download it from Google and put it on your iPod to watch...maybe while you're riding the Red Line...)