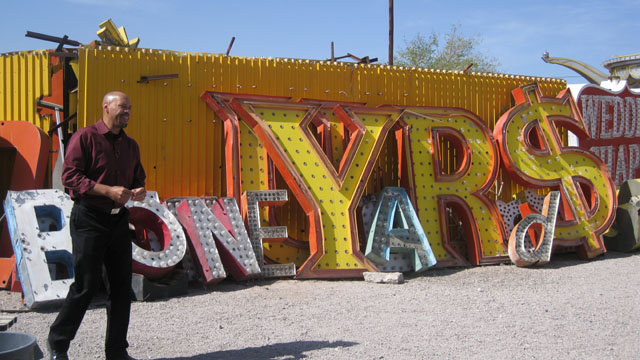 Tonight on an all-new episode of KCET's award-winning news program, SoCal Connected, which airs at 8 p.m., correspondent John Ridley, takes viewers on a tour of the gambling Mecca that reinvented itself during good times only to now face new challenges during a tough economy.

During tonight's episode, Ridley visits the chapel where he was married for a report on Vegas’ other major industry and catches up with Vegas resident and creator/host of the once popular TV series Lifestyles of the Rich and Famous, Robin Leach who currently blogs about celebrity life in Sin City. Ridley also takes a tour of the neon “boneyard,” where signage from Las Vegas’ past is being collected for a future museum, and checks out the massive hotel and mixed-use construction projects currently experiencing funding shortages.

LAist was fortunate enough to catch up with Ridley, an Emmy Award-winning commentator, accomplished author, screenwriter, commentator and self-described fan of Las Vegas whose work regularly appears on NPR, MSNBC and SoCal Connected, to discuss the city that remains a destination for millions of Southern Californians.

You are a self-described fan of Las Vegas, what is it that you love about the city?
I understand they allow gambling there.

What are some of your favorite things to do in Vegas?
Hang out with my beautiful wife who I married in Vegas.

Vegas has been hit hard by the current economic crisis, can you get a sense of how hard Vegas has been hit just by walking around the city?
Absolutely. We walked around and the people seemed sad and depressed.

What are some of the signs that things aren't going as well as they once were?
Semi finished construction and a distinct lack of people to fill the construction were it to be completed. The people we talked to were not happy folks. The tourists were all still having a good time though.

What efforts are being made by the locals to bring more people out to Vegas?
Everything is on sale: hotel rooms, restaurants…If you can afford to get out now is a great time to go.

You visited the Neon Boneyard, what are some of the most recognizable signs in that collection?
The Stardust sign and the sign from the Golden Nugget