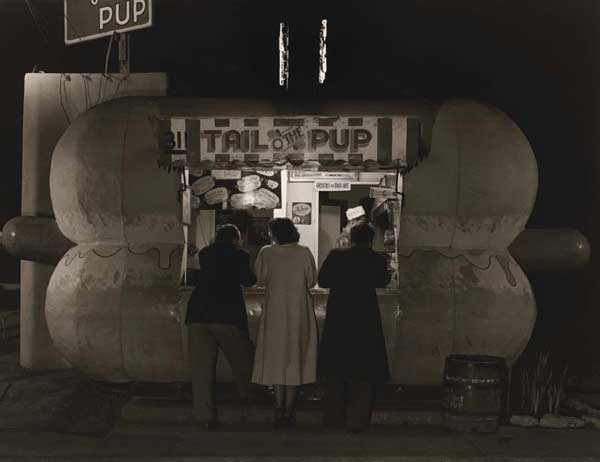 Tail O' The Pup in better days, from their website.

We in Los Angeles like our big food. Big, architectural, junk food that is. Perhaps the king of big food is the Tail 'o the Pup, a hot dog stand designed in the shape of a hot dog in a bun. Already moved once from its original location where the Beverly Center now stands, the Tail O'the Pup was declared by the City of Los Angeles to be a cultural landmark. In 2005, it was moved again, to make room for developers.

Tail O' the Pup was the creation of Milton J. Black, and it was finished in 1946. It orginally stood at 311 La Cienega Boulevard. It was part of an architectural movement in Los Angeles, called Programmatic, where things were built in the shape of the products they sold to attract the attention of a population increasingly speeding by in cars. Los Angeles eventually outgrew this mid-century whimsy and few buildings in this style persist. In 1946, it would have stood across the street from Beverly Park, the amusement park (complete with a ferris wheel, fun house, and boat and pony rides) that stood where the Beverly Center is now. (LA used to be a lot more fun!)

The park closed in 1974, and by 1982 the Beverly Center was there. It probably wasn't much of a surprise in 1985, people wanted to close the Pup and build the Sofitel (which still stands there). In response to massive public outcry, it was moved around the corner to 329 San Vicente Boulevard.

But progress would not be stopped. In 2005, the developer who owned the land wanted to build a retirement home on the property, the Pup's fate was once again in question. After much back and forth, it was agreed that the Pup would close, put its famous plaster hot dog in storage and seek out a new southland location to sell hot dogs. In 2006, the City of Los Angeles designated it a cultural landmark. The outdated website claims that the Tail 'O the Pup will reopen in 2007, but hasn't been updated since. Hopefully, this isn't the last page in this tale (pun intended), for there is too little to delight at in this world, and too much history in our remaining large plaster foods.