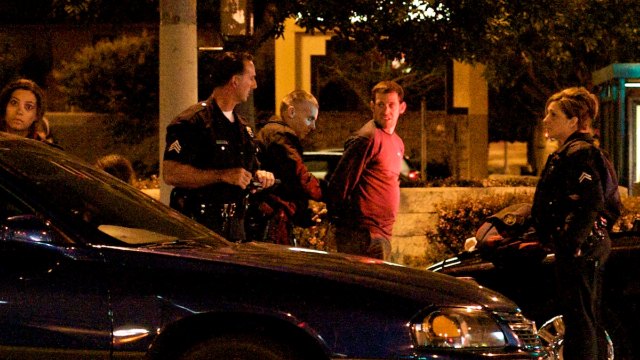 On Saturday night, two cyclists were detained, handcuffed and cited for small infractions including incorrect address on a driver's license and no bicycle license, although the law regarding bicycle licenses has been suspended by City Council.

The triviality that took place is now on the record.

"This is how I spent my Saturday night," cyclists Alex Thompson said this morning as he held the above photo of him in handcuffs up to the LAPD's Police Commission. "[The other cyclist] was cuffed and searched, told his put his face on the car—'Keep his fucking face on the car," that's what the officer told him. And at the end of it all, after 25 minutes of this, he was issued this citation." Thompson then held a photo of it to the commission. "The citation is a citation for no bike license and an incorrect address on his drivers license."

Community activist Stephen Box then stood up to the commission and told them how he tried to intervene by calling the Watch Commander at Wilshire Division, who told him they could complain after the fact. "You should not have to be the victim to point out to the LAPD that something is happening that shouldn't be happening," Box said referring to the law now under a moratorium.