Meet Wintersleep: Canadian Rockers Who Want To Welcome You to the Night Sky 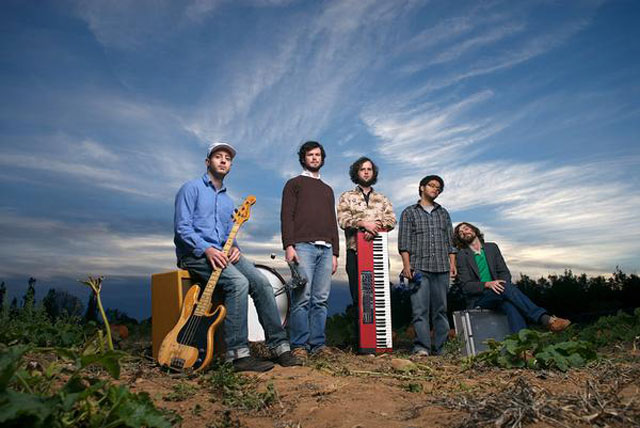 Supporting their third album, Welcome to the Night Sky, Nova Scotia's own dreamy, fuzzed out rockers Wintersleep will be playing the Echoplex tomorrow night. Wintersleep came together when drummer, Loel Campbell and Paul Murphy, guitarist, sat down at their 15th floor apartment in downtown Halifax and decided to produce some of Paul's quieter songs that didn't really fit into his current band's aggressive sound. The pair quickly compiled a catalog of songs in apartment and were soon looking for additional musicians, which they filled in with friends from the local scene. Jon Samuel, Paul Murphy, and Tim D'eon were kind enough to speak to us from Austin over the weekend. Here is some of what was said.

Do you have a favorite thing to do in LA when you're here?
Tim:Probably going to Amoeba Records, or hanging out by the payphone on the corner of Fountain and Fairfax...

Paul: Last time I ate a really good veggie burger at a burger joint.I remember nothing about it, though...where it was or what the place was called, which is a shame. I also ate some delicious chocolate peanut butter squares and drank a bunch of Scotch that the guys bought me and then later drank with me in the van in Jamestown CA. It was my birthday last time, a bit of an unforgettable while impossible-to-really remember-fully sort of experience.

How did you guys get together?
Tim: We were all in Halifax, N.S. playing in "louder" bands and decided to do some recordings for some of Paul's softer songs. That eventually turned into what is now Wintersleep.

What made you pick up instruments? How old were you?
Tim: (laughs) Nirvana made it look easy.I guess I was two, if you call a toy guitar an instrument....

Jon: We all spent our teenage years playing our instruments and being influenced by the bands of that time. Groups like Sonic Youth, Nirvana were some of our early favorites and helped shaped our musical minds.

Paul: My older brother Jon played music in a band. My younger brother Michael was really cool and was into really great bands. They were both into books and writing and doing creative things. I was very inspired by that.

What is the weirdest thing you ever saw at a show?
Tim: I saw somebody stick a drumstick in a very disgusting place....

If you could change one thing about the music industry what would it be?
Jon: We've been playing live music for sometime now, ten plus years, however, we are all relatively new to the music industry side of things. I think we need to pause and get our heads around it a bit more before we can make any meaningful comments about it. Good question though....I'm thinking.

Your new album is called Welcome to the Night Sky. What is the significance
of this title?

Paul: Our new album is indeed called Welcome to the Night Sky. It's from a sort of "how to" book on space travel. I just found the line very inviting. I guess I don't know
what mood exactly it invites...it's up for grabs really. It kind of evokes a sense of playfulness and wonder and mystery. The narratives on the record all kind of tie into it. Reading lots about space, science fictiony stuff.

Do you have any musical guilty pleasures?
Tim: " I like a good beer buzz early in the morning, and Billy likes to peel the labels from his bottles of Bud..... " 1

Paul:Sade...but she isn't really guilty because she's actually amazing and has a great band. It just feels so good.

Jon: Lil Wayne. Not everything he does is golden. Some of things he's says are so wrong, but he can be so on the ball. He can be funny and witty. Wezzy's got a voice and phrasing, you know, flow. He really is a rare talent in my view.

Do you have any strange booking stories?
Tim: You mean like when we played in somebody's back yard in Brockville, Ontario for a BBQ or when somebody tried to get us to play their daughters birthday party?!

Um, yes.
Paul: Once we got booked to play an abandoned slaughterhouse in Italy run by gypsies. We think some of us were fed dog meat..,mystery meat anyway, tucked away in the pasta..

What album can you not live without?
Tim:Do Make Say Think's & Yet & Yet

Jon: I can't imagine not having heard Radiohead's Ok Computer. That record really showed me how to value production. Listeining to individual instruments and seeing how they effect and add to the song as a whole. If you're asking if I was stranded somewhere with only one record to listen to what would it be, I wouldn't be able to pick just one - though Do Make Say Think's & Yet & Yet comes to mind.

If you weren't musicians what would you do?
Tim: Probably running our own bagel shop on St. Viateur in Montreal.

Jon: The only job that I've enjoyed was my first - being a flower clown. I dressed up in a ridiculous costume and would walk up and down one of the busy intersections in my home town, and advertise rose specials our company had. I would make mixed tapes once a week and then go and dance and sing on the corner. Maybe I could do that.

Which do you prefer playing live or recording?
Tim: I can't really say. I like them both equally.....

Paul: I guess if you are inside recording for too long you feel the need to get out and play those songs for people. And if you are just always on tour the idea of being home recording and living a regular life is very appealing. They can both be very wonderful experiences.

What's the best act you've seen in Austin thus far? (Other than yourselves, of course.)

Tim:We like to get together and talk about songs while drinking milkshakes and root beer floats...

Please finish the sentence: If you're in Nova Scotia you simply must...
Tim: Get out! Just kidding, try some Rappie Pie and get a Propeller IPA Beer from the local micro-brewery.

Paul: Eat lobsters and other various types of fish and wear a big sou' wester hat and a plaid skirt...The lighthouse in Peggy's Cove is very nice trip actually. Do that.

Be sure to check out Wintersleep's show at the Echoplex on Tuesday. They will be playing with the Aussie buzz band An Horse.

1. All I Wanna Do by Sheryl Crow. (But you already knew that. I hope.)