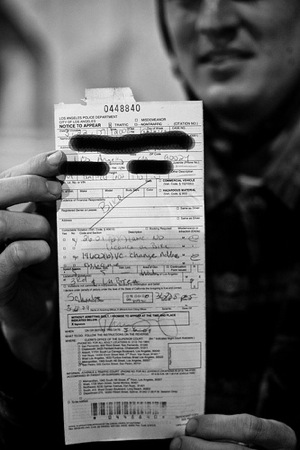 Photo by Alex Thompson
A report last year from LAPD Chief of Police William Bratton signaled the end of enforcing bicycle licenses, a law that was so little known within the department, you couldn't obtain one at most police stations like you were supposed to. City Council then approved the matter in January.

Fast forward to last Saturday night when two bicyclists were detained in handcuffs, one of them for not having a bicycle license when pulled over during a large group ride in Hollywood. One cyclist was in cuffs being cited for not having a bicycle license and an out of date address on his drivers license when blogger Alex Thompson began taking photos. Then Thompson was detained, cuffed and cited for allegedly crossing the street against the red flashing hand.

"Handcuffing someone for not having a bike license? For crossing the street against a flashing red hand? What country am I living in?" questioned Damien Newton at LA Streetsblog.

The LAPD is allowed to handcuff detainees in two situations. One is on when officers are responding to a call with weapons. The other is at an officer's discretion, based on how cooperative a person is or if they think the situation could turn violent. "Everything is done is to keep it from escalating to the next level," explained Officer Sam Park, noting that handcuffs can be used in any situation including minor ones like traffic stops and jaywalking. "You never really know who you're dealing with on the street."

Additionally, if no actual arrest is made, no record of a detainee being handcuffed is made either.

As for the citations written Saturday night, Thompson and the other cyclist plan on fighting it in court. And no matter the outcome, this issue will come back to City Council, who scratched the bicycle license law from the books. To that, Newton huffs, "is the City Council just an advisory group these days?