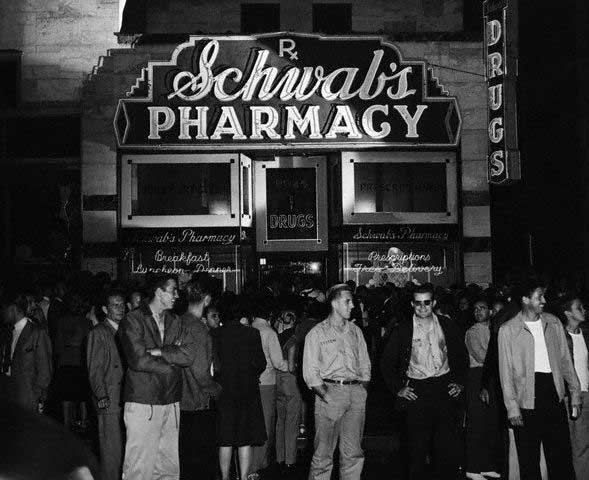 Crowds gather outside Schwab's on Sunset in 1950 (Photo: Underwood & Underwood/Corbis)

Schwab's Pharmacy opened at 8024 Sunset Boulevard in 1932, and was run by brothers Bernard, Leon, Jack and Martin Schwab. They had purchased a failing drug store and decided to capitalize on the local business from nearby studios, like Republic, RKO, and Columbia. The first Schwab's was located downtown on 6th. It was a typical drugstore of its time--goods and sundries available for purchase, prescriptions filled, and a soda fountain with counter service--only it happened to be in the heart of Hollywood. (Well, technically it's in West Hollywood, some may say it's West Hollywood--it's not--but WeHo wasn't incorporated as a city until 1984, one year after Schwab's closed, so that point is fairly moot anyhow.*) 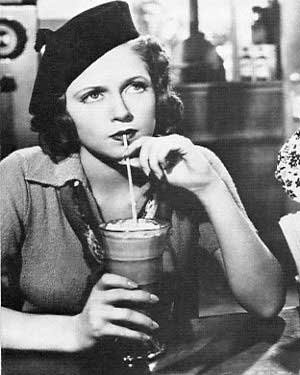 Lana Turner in "They Won't Forget"--her first film after being discovered. But was she discovered at Schwab's?
What made Schwab's unlike other drug stores was the fact that it became a gathering place for actors. Not just celebrities, mind you--although they were among the clientele in the pharmacy's impressive Rolodex--but mostly working, or hoping-to-be-working, actors, who called the place "headquarters" and who spent hours at the counter chatting with each other and perusing the trade rags. Schwab's was a great leveler; as one website devoted to Hollywood's "Golden Era" explains:

It was unique among local hot spots in that it welcomed business from all rungs of the film industry ladder, and everyone was treated with equal deference. In the '30s and '40s you could spot Judy Garland, Mickey Rooney, Orson Welles, Ida Lupino, the Marx and Ritz Brothers, Marilyn Monroe, and Ronald Reagan rubbing shoulders with the rabble here. Chaplin and Harold Lloyd came to play the pinball machines, and it was a favorite trysting place for F. Scott Fitzgerald and his lover Sheilah Graham. Schwab's was particularly solicitous of Tinseltown's "underemployed"; credit was guaranteed, and struggling young performers could always drop in for a free meal. One of them, Ava Gardner, landed a job behind the soda fountain while waiting for her big break

Stories like this are a dime a dozen when it comes to Schwab's, and in fact, many tales of the "it happened at Schwab's" variety became Hollywood lore.

Probably the best known Schwab's story is that actress Lana Turner was "discovered" here while sitting at the soda fountain counter. The teenager, soon to become Hollywood's gorgeous "sweater girl," was a student at Hollywood High, and allegedly came in for a treat and was spotted by an agent, a story that persists until this day, but is widely disputed. In a 1983 LA Times article, co-owner Leon Schwab still held fast to the rumor's shaky truth: "But was Lana Turner discovered sitting at the counter? 'Absolutely,' said Leon Schwab, 'but she won't admit it.' (She claims the discovery took place at a malt shop across from Hollywood High)" (Rossi). True Hollywood scholars will scoff at the Schwab's version, and tell you that Turner's big break did happen, but down the street at Pop's Top Hat, which was at 6750 Sunset Blvd, and a heck of a lot closer to Hollywood High.

Other tales were told about author F. Scott Fitzgerald, who hung around there in his screenwriting days, who had a heart attach there in 1940 while buying a pack of cigarettes. It's also said that composer Harold Arlen wrote "Over the Rainbow" for The Wizard of Oz after dropping in to use the counter space to jot down a tune that came to him. Hollywood has a tendency to make the ephemeral into legend; as time goes by who's to say these tales aren't true anymore? 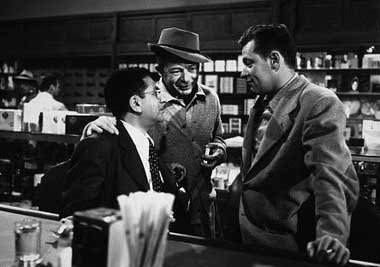 Inside the replica Schwab's set for the movie Sunset Blvd. (still from film)
But if you've seen Billy Wilder's 1950 noir classic, Sunset Boulevard, then you've seen Schwab's. Down on his luck, screenwriter Joe Gillis (played by William Holden) frequented "headquarters" as any other of his ilk would do at the time. After getting turned down at a studio he tells us:

"After that, I drove down to headquarters. That's the way a lot of us think about Schwab's. Kind of a combination office, coffee klatch and waiting room. Waiting, waiting for the gravy train."

The scenes from the film were not, however, shot inside the real Schwab's, but rather a replica built as a set. (Decades later Andrew Lloyd Webber turned the film into a musical, complete with a number set in and about Schwab's.)

Schwab's became a popular local mini-chain for the brothers, who eventually operated a handful of locations in the city, but none were ever as hallowed as the original Sunset Blvd location, which was open the longest. (Others included outposts at 6255 Hollywood Blvd. in Hollywood, 401 N. Bedford Dr. in Beverly Hills and 430 N. Roxbury, in Beverly Hills; Marilyn Monroe's plentiful prescriptions were filled at the one on Bedford). Its popularity held into the following decades, and as the popular music scene began to take hold in that part of town, well-known performers of the 70s would frequent Schwab's. In 1976, it was still considered one of the best spots in town to grab a plain old cup of joe (Schwab's served Apfel's) according to a roundup done by the LA Times. (See a photo of actress Diane Keaton at the counter of Schwab's taken in the late 70s here.) 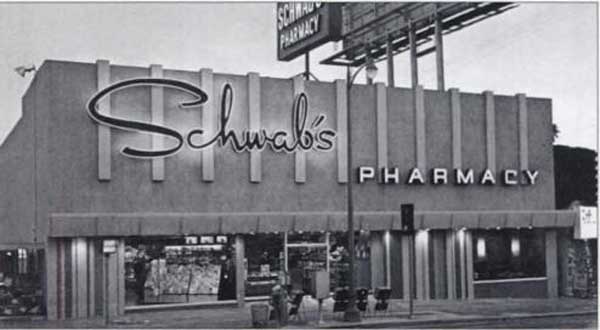 
In a 1977 LA Times article featuring a journey down Sunset Blvd it seemed like things were status quo at the legdendary drug store:

Schwab's has been a haven through the years for just about every out-of-work actor in town. Today, at lunch time, it is swarming with patrons, copies of Variety tucked under their arms. The jangling of the the telephone periodically interrupts the incessant show business chatter, for Schwab's is part conference room as well.

You couldn't spin a dead cat without knocking over an actor at Schwab's, and when the jobs weren't available, the actors were known to linger longer. This was the case in 1980, when SAG and AFTRA went on strike; where else would the LA Times send a reporter than to Schwab's to get the scoop from the thespians--mostly male character actors--on the state of show business at the time.

But soon after, things came to an end for Schwab's. After five decades of service on Sunset Blvd, the store closed down, and somewhat suddenly in late October, 1983. Leon Schwab said publicly it was for family reasons, but the truth was that the store was in financial peril. Employees--some of whom had worked there for more than thirty years--were saddened and stunned by the news, and as creditors came calling, the plan was to bury the entity, meaning to shut it down and keep the Schwab name out of the drug store biz for good (Stammer). Although at the time Leon Schwab hinted at starting up again somewhere else, it soon became apparent that would not be the case. By December, Schwab's fate was sealed:

At a public auction Wednesday, anything from Schwab's not bolted down--and most of the things that were--went to the highest bidder: the pharmacy's stools, fountain paraphernalia, dishes, counters, clocks, signs, even the Rolodexes filled with celebrity names.

It took the wrecking ball a couple of more years to knock down Schwab's, but in 1988 the building came down, making way for a large retail complex. In 1992 the Virgin Megastore opened, and, although it was a much-loved place, it never served as "headquarters" and it certainly didn't serve as long; as 2007 came to a close, so did the Virgin Megastore's West Hollywood chapter. 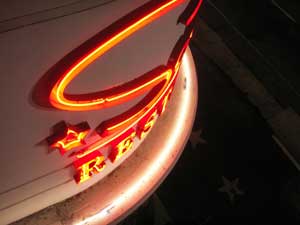 The "new" (now old again) Schwab's (Photo by Daquella manera/Flickr)
But that wasn't (quite) the end of Schwab's Hollywood story. In 2003, plans were underway to bring back the glory of the drug store, when Bond Cos. bought the rights to the name, and began to develop a new incarnation of Schwab's at the Sunset + Vine complex. The initial vision went as follows, according to the LA Times:

The new Schwab's will be on the first floor of the complex, behind the preserved 1938 art deco facade of the former TAV Studios, which once housed ABC Radio and later the Merv Griffin Theater. [...]

In addition to a lunch counter, the Schwab's scheduled to open next year will include a boutique department store, yoga and Pilates studio, hair salon, sushi bar and restaurant, flower shop, cafe and teahouse.

[Larry] Bond came up with the idea of buying a great name from the past to draw attention to his project and the neighborhood. "I was looking for something that would bring back the excitement and glamour of yesteryear," said Bond. "I couldn't think of anything better than the Brown Derby or Schwab's Pharmacy."

In reality, Schwab's reborn was less of the vision Bond had, and more of a misunderstood upscale restaurant with a small soda fountain in the lobby, neither of which ever caught on. The rest of the building was--and is--occupied with a variety of retailers, but none of them a part of Schwab's. After a fumbling couple of years, Schwab's redux closed down (the space is now Ivan Kane's Cafe W as), and seems destined to fade from memory...as its predecessor.

*Edited to correct error regarding West Hollywood's official boundaries. While many (including the Virgin Megastore itself and most of the media referring to that location) referred to that corner as being "West Hollywood" it was/is not. See map. Thanks to the commentor who saw to it we weren't conflating or confusing cities...