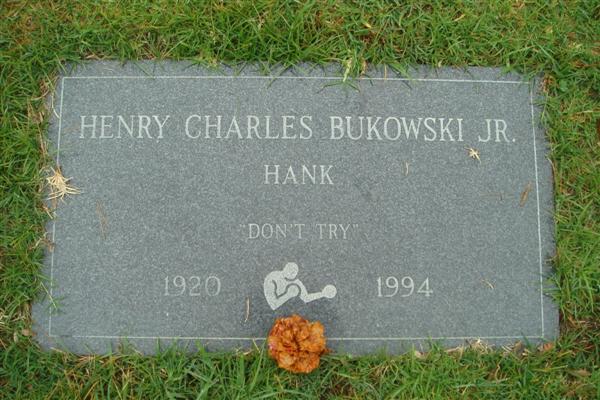 Photo by Willy Blackmore for LAist

Living in Los Angeles, it is very easy to cross paths with the former poet laureate of Skid Row, Charles Bukowski. From the most mundane daily task of sending a letter at the USPS Terminal Annex in Downtown L.A. to drinking in any of the numerous dive bars scattered throughout the Southland, you may find yourself living some shades of Bukowski novel in a variety of places. He is to Los Angeles as Woody Allen is to New York—in a seedier, dirtier dirty old man kind of way: An artist who defines a city (both named works after neighborhoods in their towns, Hollywood and Manhattan) and, simultaneously, an artist whose city defines him.

But even with his court apartment on De Longpre now an official landmark (even if his widow, Linda Lee Bukowski, thinks little of it) and the Los Angeles tour company Esotouric offering Bukowski-themed bus tours, there is a fair amount of debate about where Bukowski did what.

Most every dive bar in town may somehow embody his spirit—or at least that of Henry Chinaski, Bukowski’s literary alter-ego—but as to which are home to his ghost, there is little consensus. The Frolic Room, on Hollywood Boulevard, seems to be the one place that the public record (i.e., Bukowski fan websites) can agree upon as a former hangout. But Bukowski has to compete with another former regular, L.A.’s most famous dead girl, Elizabeth Short—otherwise know as the Black Dahlia.

There is no debate, however, about where Charles Bukowski is buried. He now lays in plot number 875 of the Ocean View section of Green Hills Memorial Park in Rancho Palos Verdes, just down the road from San Pedro, where Bukowski lived with his wife from 1978 until his death, from leukemia, in 1994. The headstone bears a simplified graphic of a boxer and the epitaph “Don’t Try.” Ask for him by name or by plot number and someone at the cemetery will help you find Hank’s resting place. If asked by number, they’ll most likely laugh and point you toward the grave with all the beer bottles. But Green Hills Memorial Park is no Père Lachaise and Bukowski’s tombstone doesn’t have quite the same draw as Jim Morrison’s as a destination for public sex, so there is no fence, no security. You’re welcome to hang out as long as you like—bring the man a drink, or, like we found evidence of, a Marlboro Light with THANKS written on the butt in black Sharpie. Affection takes all forms.

Figure skating buffs or Russ Meyer fans may choose to follow up a visit to Buk with a moment spent at the graveside of Rhode Michelson (champion skater) or John Logan (Beyond the Valley of the Dolls actor). But if those hold no draw, make an afternoon of it by grabbing a drink (consuming alcohol at inappropriate hours is the only real way to honor Bukowski’s legacy) at one of the many dive bars in San Pedro, a number of which are located within stumbling distance of each other on Pacific Avenue.

Harold’s Place is a good starting point. It’s the kind of dive bar that, more than ten years after the ban on smoking in public establishments, patrons can still enjoy a beer and a cigarette from the comfort of their bar stool; the kind of bar where the Latina women nursing a Corona at two in the afternoon yells out “pendeja!” occasionally, at no one in particular. Complete with un-ironic taxidermy for decoration, it is without a doubt the kind of bar you could imagine Charles Bukowski drinking in.

But did he ever go there? Chances are, no. According to Linda Bukowski, Hank never went out to bars during his years in San Pedro. He had moved on from whiskey-and-water to German white wine and imported beers, enjoyed in the comfort of their home.

But Chinaski? He was a regular, for sure.