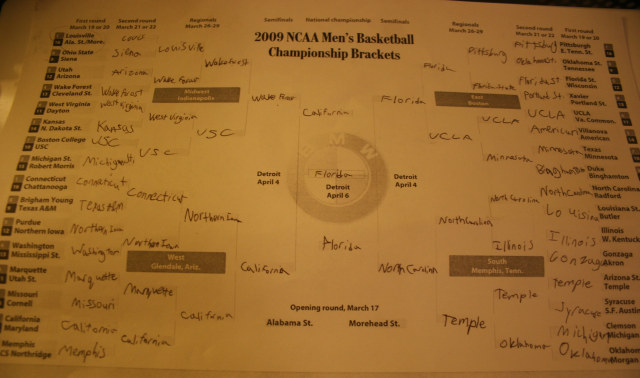 Her name is Reason and she is not quite 10 years old. In fact, if you ask her, she'll tell you she is 9-and-a-half, which bodes well for her ability to keep a close tab on important numbers. But that is not why I asked her to fill out my NCAA brackets this year. Each and every year, we are subject to endless debate about who will win, who should win and who who has no chance. This year, I decided to forgo usual strategy that included years of picks based on advice from so-called experts and go with someone whose lack of college basketball wisdom rivals only her fondness for recess.

As I mentioned, Reason, the hopefully aptly named daughter of a co-worker, knows little about sports and even less about college basketball. Which is key. Last year, I placed 15 out of 16 entrants in a March Madness tournament pool that included a few upsets I managed to predict and one emotional pick (UCLA) that turned out in my favor. For the most part, though, success was elusive and any hope I pinned on these NCAA wizards turned out to be fool's gold.

This year, I am doing things a bit differently. I am tracking two brackets: one I filled with picks of winners that are either projected to win or upsets that have been deemed "possible," while Reason's picks are based somewhat on rankings (she liked the idea of upsets), geographical biases (her Mom is from Florida) and school names she liked (Binghamton).

Starting with my Southern regional bracket, the only surprise might be Arizona St. with a projected upset over Syracuse. But the Sun Devils will then return to Phoenix after a defeat at the hands of Oklahoma, who will go on to lose to UConn.

Reason's South bracket, like most of the quadrant, features upsets galore. She has Arizona St. going out in the first round (just like the president!) and Michigan upending Clemson. She projected Temple to go to the Great 8, where they lose to UNC.

Moving west, my fairly conventional bracket features what might be considered an upset, with Maryland beating Cal in the first round. Other than that, I have UConn winning the region against a good Memphis team. Not only does Reason disagree and pick Cal to beat Maryland, she has the Golden Bears going all the way to the championship game. She also picked Northern Iowa to beat Purdue in the first round, Washington in the second round and UConn in the Sweet 16. Fantastic!

Up in the Midwest, I have Louisville beating Michigan St. to advance to the championship game over Pitt. I also picked 'SC to win in the first round, lose in the second and Arizona is predicted to bow out early from the tournament. Reason has 'SC going all the way to the Great 8, beating Michigan St., West Virgina (who beat Kansas), but losing to Wake Forest (in the semi's), who could beat Louisville.

In the East bracket, I went with UCLA (three Final Fours in a row + my Alma mater = easy pick for me) to beat Duke, two teams that don't have much of an inside presence. The Bruins then lose to eventual champ Pitt, a team I projected to steamroll through this division, defeating Xavier a game earlier who beat Wisconsin before that who upset Florida St. in the first round.

And speaking of Florida St., Reason has them winning it all (all), after victories against UCLA, Pitt and Portland St., who she picked to upset Xavier. She also has Binghamton beating Duke (!) in the first round.

To recap: my Final Four features all #1 seeds, with Pitt beating Louisville in the final game. Reason has #7 Cal, #4 Wake Forest, #5 Florida St. and #1 UConn in her Final Four. For those keeping score, that's a collective ranking in the Final Four of 4 for me and 17 for Reason. She has Florida St. winning it all against Cal.