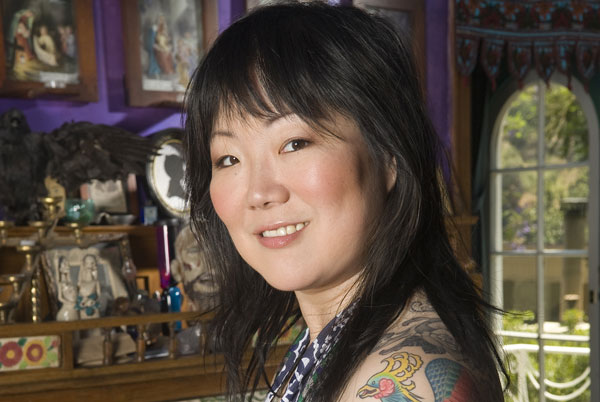 Comedian Margaret Cho has never been afraid to push the envelope, challenge stereotypes and use humor to make some stunningly valid points. This year, Cho is embracing a new role—that of a singer/songwriter. She's now working on her first full-length music album, with the help of some well-known friends. Of course, Cho infuses the songs with her unmistakable wit, so it's safe to say her lyrics are just as memorable as her melodies.

You don't have to wait until her album release to hear the new music. She's incorporated some of the new tunes into Fingerbang!—her exclusive comedy/variety show hosted at Largo at the Coronet. This month's show on Tuesday, March 24, will include guests such as Susie Suh and Grant-Lee Phillips. LAist recently caught up with Cho and chatted about her Largo show, songwriting and burlesque.

LAist: When did you first decide to enter the singer/songwriter realm?

Margaret Cho: I've been doing music in my comedy stuff for a while now, since around 1999. At that time, I actually made—but never officially released—a really silly rap record. I've been incorporating music into my act since then, but I never wrote my own music or was able to play anything until now.

Through this process I've gotten better as a musician and I'm also taking guitar and singing lessons to improve my "instrument," so it's a very fun process. I'm really learning this entirely new art form, which is pretty daunting. But what's great is I have incredible people who are helping me. I have the best teachers in the world—people like Jon Brion, Grant-Lee Phillips, Jill Sobule and Patty Griffin.

When you collaborate with each of these artists, do you write the music or the lyrics first?

The lyrics. Whenever I find out I'm going to write with someone, I write lyrics for a few different songs—depending on the person I'm going to be writing with—and I ask them, "Which one do you want to do?" The process depends on the artist. Sometimes the artist is on tour, and others such as Garrison Starr or Rachel Yamagata don't live here, so we send MP3s back and forth. It works really well.

What's your ultimate goal when you set out to write music—to make people laugh or to get them to hum along?

Well, I would like to do both. I'd like to do songs that are funny, but also have the ability to cross over and be good music. So that's why I've elected to work with musicians I absolutely love, because I want to get their take on it.

You've often gotten very personal and laid yourself bare during your comedy shows. Does the singing aspect take it to a different level of vulnerability?

Yeah, it's very different, but it's also the same in many ways. The intention hasn't changed—I still want to be a stand-up comedian and I never want to leave that. It's just a slightly different way of presenting what I do.

Who is your favorite singer/songwriter?

My very favorite songwriter for 20 years or so has been another Largo person, Neil Finn. I'm actually hoping to write with him at some point. It's a little harder because he's so far away, but I really hope it happens.

Fingerbang! is a show that's exclusive to Largo at the Coronet. When did you first perform at Largo?

I've been doing shows at Largo since 1995 or so. I'm a longtime Largo person. I really love the space—it's the perfect place to perform. Flanagan, the owner, is so wonderful. He's the right enabler; he really helps artists create and it's a beautiful experience to be able to work with him. He's brought me together with some great people and has helped me a lot, especially with this record.

Largo is my favorite place to see shows, just because you're always going to see somebody totally amazing and see the kind of collaborations you'd never see anywhere else. It's priceless—especially in the new location with the big stage, and the marvelous acoustics. We really have a good time there.

What sets Fingerbang! apart from what you do on tour?

It's an opportunity for me to invite other musicians—people I've collaborated with on these different songs—and have them join me on stage. 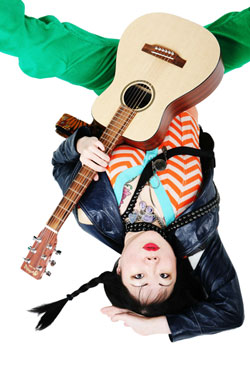 Photo by PixieVisionProductions
Getting into your comedy a bit, do you feel that the growth of sites like YouTube has impacted the way you tour? Now that people can record your shows with a cell phone and post everything online within minutes, do you see that as good, bad or a mixed blessing?

I think it's good. To me it's a fantastic advertisement for what you're doing and it's another outlet to do different things. For myself artistically, I've just started making music videos again—last week I made one for Jill Sobule—and that's a great place for them to get exposure. YouTube is the new MTV.

It was great to see your return to TV with The Cho Show last year. Is Season 2 in the works?

Well, it's a little bit difficult because now I'm doing a show for Lifetime called Drop Dead Diva, so I'm not sure when I'll have time to do another season. I really want to and we're trying to figure out how that's going to happen. I'd love to do both.

What drew you to the script of Drop Dead Diva?

I really fell in love with it. It's about a blond model—really thin and beautiful—who dies and gets her soul transferred into the body of a fat woman. I play the larger woman's legal secretary, so my character is trying to figure out why she's acting so weird.

The show is about how much we value our physical form and how much thinness and beauty are important in our society. It's a beautiful script and the first time I read it, I really cried because I've had weight issues my whole life. The truth of it just struck me right in the heart and the acting in the show is incredible.

For the last couple decades, you've spoken out about the lack of well-written Asian-American roles on TV. Do you feel it's improved at all in the last five or so years?

I think it's gotten somewhat better. There are some people on Heroes, Lost, Grey's Anatomy—it's getting a little better. There's, like, three more people working now, so that's good.

These next couple questions were submitted through our website. Dan asks: Does it seem to you like queer humor and straight humor have somewhat reversed in the last couple decades? Where once gay humor was spiteful and witty, now mainstream comedy seems to be largely based on sarcasm—such as with the comeback of the roast. At the same time, shows like yours, and RuPaul's Drag Race, are shockingly entertaining while being far more caring and affirming to their participants than what you see on normal reality shows.

I think that's true. There is more of a need for queer comedy nowadays to focus on things like family and closeness—and function as opposed to dysfunction—just to affirm the idea that we can be queer and functional and happy and loving. In a lot of ways, mainstream humor has gotten a lot more snarky and bitchy, and just a lot more campy in general. So I think that is true. But it also goes back and forth, so it just depends.

You've often included burlesque elements in your tours. What do you think of acts like the Suicide Girls?

I love the Suicide Girls and I feel like I'm their spiritual mother. I'm very tattooed and into a very sex-positive attitude. I think that burlesque is a beautiful world and a very entertaining art form. I don't want to do it anymore because I have huge scars on my nipples from wearing pasties every night. (laughs) I just think of burlesque as a very positive thing because women are the main audience for burlesque. When you're able to see different bodies and different women feeling good in their bodies in a very playful and fun way, it's a really healing thing. 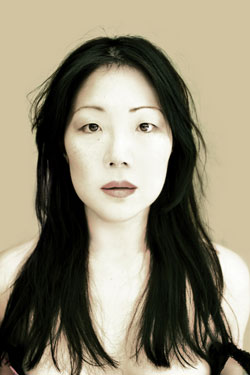 Photo by Austin Young
I know you also really enjoy belly dancing. Have you ever thought of releasing a belly dancing instructional DVD?

I have! But you know, I'm not that good, so that would not be a good idea. I'm a passable belly dancer but there really are some greats out there, so I have no business teaching it.

I think they're the same crowd, so I don't know! (laughs) Or one crowd is the boyfriends of the other crowd. I don't think they would want to be kicking each other's asses.

Do you have any new tattoos?

I have a new Victorian lover's eye on my right arm.

This question came in via LAist's Twitter page: What's your favorite Korean restaurant in LA?

My favorite Korean restaurant is probably Ka-San, and it's on Foothill Boulevard in La Crescenta.

Speaking about Los Angeles, what is it about LA that led you to choose to live here over anywhere else in the world?

Well, I love LA. I always wanted to live here. When I was a kid and that Valley Girl movie came out, I thought to myself, "I'm going to move to LA. I'm going to live in the Valley someday." I just really fetishized it and thought it was the greatest thing in the world. And I really love it.

Can you give us any scoop regarding your Fingerbang! show at Largo on the 24th?

Grant-Lee Phillips is going to be performing with me, as well as Garrison Starr and Susie Suh. Plus Liam Sullivan, Selene Luna and Ian Harvie will be back. It'll be a great night.

Thanks for speaking with LAist, Margaret!