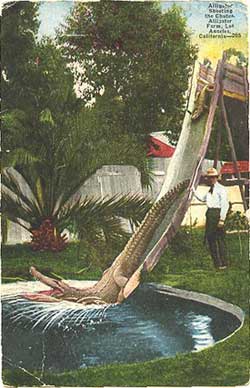 Unfortunately, you were born too late. You missed the alligator farm. At the turn of the century, the Lincoln Heights neighborhood popular as a weekend get away for Angelenos. In 1907, Francis Earnest and his partner, Joe "Alligator" Campbell opened an alligator farm (It was right next door to their ostrich farm. I'm not kidding.)

With 2000 alligators and a smattering of turtles, iguanas and snakes, the farm offered such attractions as watching the alligators being fed with live chickens, perform tricks and wrestle with humans. The (tasteful) gift shop featured a wide selection of products made with alligator skin, including shoes, luggage and wallets.

Perhaps most surreal of all, at the "The Most Stupendous Aggregation of Alligators Ever Exhibited," you could ride a saddled alligator around the park. No, really!

Apparently, it was a popular site for fraternity pranks, as pledges would be forced to try to steal an alligator off the property. There were other ways for the alligators could make field trips. Sometimes, when rain flooded the nearby reservoir, it would overflow into the farm, giving the alligators an opportunity to swim into the lake, or even getting into canals or backyard pools. Even when they weren't roaming free, they made their whereabouts known by hollering at each other in the middle of the night.

Alligators were famous too. They starred in some Tarzan films. They wrestled people in stunts. The most famous though was Billy, said to be the oldest alligator in captivity. He could be relied upon to open his jaws when a chicken was dangled above them, so he made appearances in numerous films between the 1910s and the 1940s.

In 1953, the Farm was moved to Buena Vista, close to Knott's Berry Farm (and now home to a Radisson Hotel.) However, flagging attendance closed the park the seventies, long before people took animal rights seriously. The 'gators were moved to a private reserve in Florida. Now the only violent, braying reptiles in LA can be found in corner offices.