60 Votes from Cyclists May Have Pushed Candidate to the Top 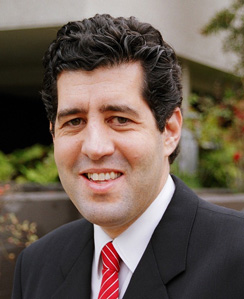 David Vehedi
In last week's primary election, six candidates ran for Council District 5, which spans through portions of the Valley, Hollywood Hills, Westside, Century City and Pico/Robertson (see a PDF map here). Two candidates, with a difference of 60 votes, made it to the May 19th runoff. The lesser known David Vahedi shot up to the top past longtime politician Paul Koretz, who over a 25 year career has been a West Hollywood Councilman and State Assemblyman.

Speaking on an online panel at the LA Bike Summit this past weekend, Ted Rogers from the blog BikingInLA, told the audience the power of one vote. He asked every candidate from the 5th District to give a statement on bicycling issues and how they would address them as a councilperson. Four responded, including Vehedi—his answer was the most thorough, showing off his bicycle savvy and policy ideas for it in the city. Koretz did not respond.

Vahedi won by 60 votes against Koretz. That post had 300 unique visitors, according to Rogers, who also ended up voting for Vahedi's after reading his response. Was there a connection between Vahedi's bicycling response and his primary election win? Quite possibly.

For a relatively unknown figure in LA politics, he's definitely making some headway. In fact, a coaltiion of Homeowner Associations in the district got together and interviewed each candidate before having a panel forum. The results (interview | survey) put Vahedi overwhelmingly at the top.

LAist will be asking Vehedi and Koretz interview questions between now and the May 19th election. If you have any, whether they be bicycle related or not, drop them below in the comments section and we'll consider adding that to our list!