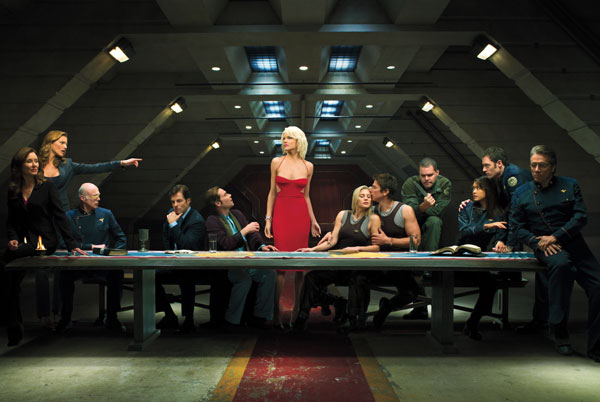 Don't miss "Battlestar Galactica/Caprica: A Look Back and a Look Ahead" at this year's PaleyFest.

This year's annual William S. Paley Television Festival (also known as PaleyFest) will feature some LAist favorites. The up close and personal television event is sponsored by the Paley Center for Media, and begins April 10 at the ArcLight Cinerama Dome. Tickets go on sale to the public today (March 1) at 9 a.m. and they're likely to sell out within 24 hours, if not sooner.

Most PaleyFest events treat fans to clips from each program (sometimes never-before-seen material) and include a panel discussion with questions from a moderator and the audience. In addition, each panel page on the PaleyFest website now includes an option for fans to submit questions prior to the event.

Just a few highlights:
Battlestar Galactica executive producers David Eick and Ronald D. Moore are already scheduled to appear on the BSG panel, titled "Battlestar Galactica/Caprica: A Look Back and a Look Ahead," and fans of the show will undoubtedly be treated to scoop about the upcoming prequel. Although no other names appear on the list of panelists, a note on the event page says, "We're expecting stars from both BSG and Caprica, and will post their names as soon as they become available."

Fans of the gorgeous and whimsical Pushing Daisies will finally get to see the three unaired episodes from the now-canceled series, with an introduction by series creator Bryan Fuller.

PaleyFest deserves kudos for adding Dr. Horrible's Sing-Along Blog to the mix this year. One can imagine that the panel for this brilliant Internet musical will be a fun group. At this point, Neil Patrick Harris is not listed on the event page, but here's hoping Dr. Horrible and his freeze ray will make an appearance!

To learn more about any of these events, visit the PaleyFest website or visit the Ticketmaster/TicketWeb page directly.

Photo via the BSG press kit