On Your March 3rd Ballot: Measure B, The Solar Energy and Job Creation Program 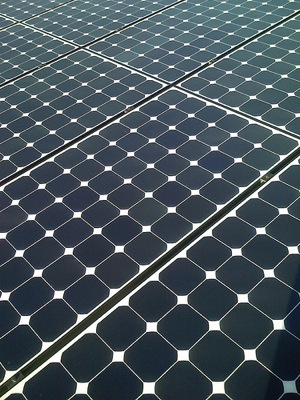 Photo: Jeremy Levine Design
When we go vote on March 3rd, the most contested and fought-over choice we make will be whether to vote yes or no on Measure B (Yes | No). So much has happened with Measure B in the last few months, and this week, both the LA Times and Daily News urged voters to say NO.

So What is it?
Measure B is the The Solar Energy and Job Creation Program which will have union Department of Water & Power employees install near 2.5 square miles worth of solar panels on public and private roofs across the city and region. The endgame? It calls for 400 megawatts by 2014.

I don't really know how power is measured, 400 megawatts means nothing to me.

To gain a little perspective on what that many megawatts means, let's look at the average usage on a daily basis. Los Angeles uses 5,100 megawatts on a typical summer day and 3,200 on a typical winter day, according to the LA Department of Water & Power (LADWP). One megawatt can power about 650 average single family homes. But one megawatt from solar "would be much less—about 250—due to lower capacity factor," a LADWP spokesperson told us, adding that the capacity of solar could be higher with more efficient solar technology.

If Measure B passes and is successful, then 1.6% in the summer and 2.5% in the winter of the city's energy will be solar powered by 2014.

Currently, Los Angeles gets 13 megawatts from solar power on a daily basis. Other renewable energy sources give Los Angeles 160 megawatts a day. And by 2010, 20% of our power should be from renewables without Measure B.

Building a larger solar energy portfolio is a good thing. So why are people up in arms about it?

It's safe to say everyone can agree that solar energy is a good thing, but to the opposition, it's the "how" we do solar. In this case it started with the process that led up to Measure B being put up on the ballot--it was quick, without much public discussion and without much study.

The LA Times put it best in a December 22nd editorial: "[City council] rushed [the measure] to the March 3 ballot promising to answer, on some later day, numerous questions about the cost and feasibility of the plan. The inevitable result of the vote-now, ask-questions-later tactic is the queasy feeling that Los Angeles voters and ratepayers are about to be snookered... Because of the slapdash and suspicious way the program has been rolled out, voters need to be on alert."

The No on Measure B campaign's key points against the merits of the measure include vaguely written language, changes to city law and union control over solar power in Los Angeles. The biggest concern is that the most detailed questions about the plan weren't answered forthright because the studies were not completed.

Let's first look at the process.

Then let's back up to the beginning. The measure's authors and official supporters are Working Californians, self-described as "a nonprofit, research-driven California advocacy group that promotes the interests of working men and women in public policy debates in the greater Los Angeles area and in California."

The two leaders, Brian D'Arcy and Marvin Kropke, of the nonprofit are "two high-level officials with the International Brotherhood of Electrical Workers," the LA Times noted last October. D'Arcy is the business manager of IBEW Local 18--in other words, the union that represents the DWP workers who will install the solar panels if Measure B is passed.

In June, they first brought the idea to the LADWP and then in August gave a copy to the LA Chamber of Commerce (they oppose the measure), according to Measure B's spokesman Bob Cherry when he was on KCRW 89.9 FM's Which Way. LA?

Then on October 14th, they met with Councilmembers Eric Garcetti, Wendy Greuel and Jan Perry along with Nancy Sutley, the former environment deputy for Mayor Villaraigosa (she now works on the Obama administration). The next day, it was introduced to City Council and by November 7th, it was on the March 3rd ballot.

So the largest solar plan in U.S. history was introduced and approved in three weeks?

Well, it's not approved just yet, that's up to the voters next week. We should rather say the "largest solar plan in U.S. history was introduced and approved for the ballot in three weeks."

[Some people are asking why] put an initiative before the voters when we could do some parts of this by ordinance. I'd say there's two reasons. One is that I think the people deserve a vote. They deserve a vote to be able to say that we "want to go forward with solar, we want to have energy independence or we don't."

That that is something that the people of Los Angeles deserve to say. We can do that ourselves [city council] but because this is a moment for Los Angeles to collectively come together and collectively make that decision, we have that ability.

Secondly, I don't want to see that commitment roll back in future years. and the ability to go to the people and make that a strong voice form the people allows us to be able to say once in for all this is Something that just can't change in future years as well.

However, it isn't as simple as Garcetti says. We can all fairly assume the majority of people in Los Angeles want good clean energy, but the concensus is that this is not the way to do it. If the voters don't approve this, it doesn't mean we don't want to have energy independence. Solar power is not a black and white issue--shades of grey are everywhere.

"'[Measure B] would in fact undermine both the city's solar energy efforts and its political oversight and accountability," the LA Times wrote in their editorial on the measure. This is a confusing issue, but all signs point towards a "no" vote in our book.