Meet Dent May - The Man Who's Making Ukuleles Sexy Again 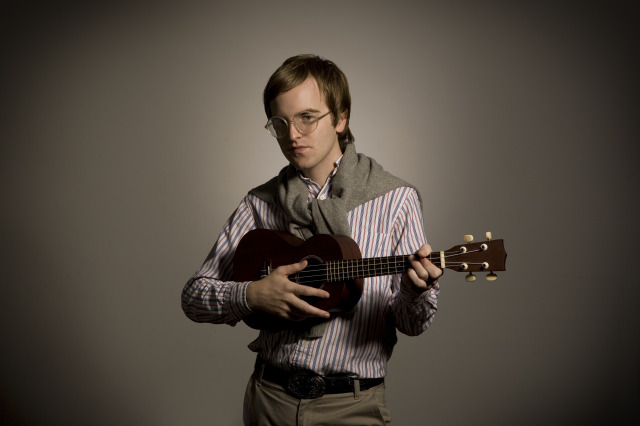 From the depths of rural Mississippi, ukulele in hand, Dent May is here to rock your world - or perhaps just to seduce you with his croon. Harking back to the 1950s era lounge music, with a little Jens Lekman and some 1960s Tropicalia thrown in for good measure, Dent May is gunning single-handedly to bring the ukulele back. No longer will it be considered a plaything of hula girls and frat boys on spring break. It will be taken seriously... okay, maybe not. But it’s definitely fun to dance to, and Mr. May has crafted a wonderful debut album, “The Good Feeling Music of Dent May and his Magnificent Ukulele”, that pays homage to those great ukulele players that came before him.

Dent (along with his Magnificent Ukulele) will be taking the Troubadour stage this Thursday in support of A.C. Newman of the New Pornographers, and he was kind enough to speak to us over the weekend. Here is some of what was said."

Does your ukulele have a name?
The one I’m playing right now I bought two days ago in Seattle, so it doesn’t have a name yet. My old one was called Jimmy.

What happened to Jimmy?
Well, he’s an electric acoustic ukulele, and his electronics got messed up a couple days ago, so he wouldn’t plug in. But he can still play regularly, so don’t worry, Jimmy is still around. It was a huge bummer, though.

What inspired you to play the ukulele?
My mother taught me when I was a little. We had a ukulele around the house, and she taught me the song 26 miles. It's this old song from the 40s that I love. It's on the album. I didn't seriously pick it up again until about a year and a half ago.

Where did you write Meet Me in the Garden?
I wrote all the songs for the album down in Mississippi at my house.

If you could sing with anyone in the world who would it be?
Definitely, Prince.

Have you asked him?
No, I’ve never met him.

You should tell him that you did an excellent cover of his song, When You Were Mine.
(Laughs) I will. He’ll have to sing with me then.

You just released your debut LP, The Good Feeling Music of Dent May and His Magnificent Ukulele on Animal Collective's record label Paw Tracks. How are they treating you?
Really great. It’s been really incredible. The record came out really great, so I can’t complain.

Where did you record the album?
In my double wide trailer in Taylor, Mississippi. Rusty (Santos), the producer, came down from New York, and we recorded it in two weeks. Then we flew to New York and mixed it there. 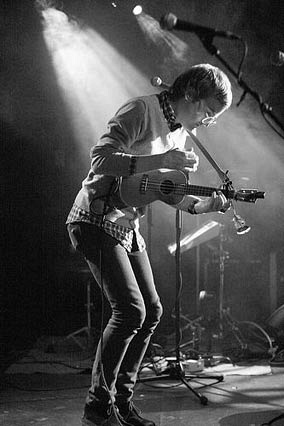 Well, we recorded all the songs live with the band. We played a bunch of different versions of the songs and picked our favorites. I’m not really that type to agonize over every note. Maybe next time I’ll write an opus.

What is your writing process like?
A lot of songs dwell in my head for awhile and then spring out when I'm doing everyday stuff. Sometimes it fits best on the ukulele, sometimes on the guitar, and sometimes on the piano, it really depends on the song.

What is the most under appreciated band right now?
Gary War. It’s just one dude, but he plays in a bunch of different bands. He's really off the radar. He doesn’t even have a Myspace.

How did you find him?
He was on tour with his band and his van broke down in Mississippi. So he hung out with me in my trailer for the weekend. It was great. We all sat around and played music while we were waiting for his van to get fixed. He’s really cool.

What was the worst show you ever did?
I've never had a super bad show, but I suppose the closest thing to it was one we did in Chapel Hill, North Carolina. It was on a Sunday during spring break and it's a college town, so no one was there. There were maybe fifteen people there, and I was really sick. Everybody was in really low spirits. Wasn’t the worst of shows, but it wasn’t great.

What was the best?
Probably the Double Decker Festival we played in Mississippi. There were a ton of people and it was such a hot day. We dressed up like it was a beach party. It was awesome.

If you were stuck on a deserted island and you could only bring three things, what would they be?
A boat, an eighteen wheeler full of food, and an iPod with a really big battery. 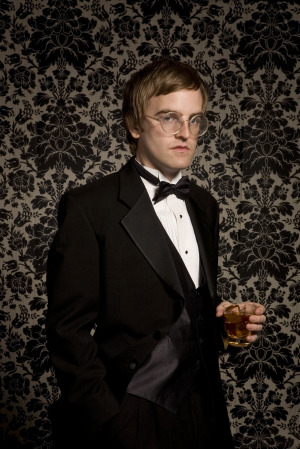 What’s the weirdest thing you ever saw from the stage?
One time somebody brought a bunch of panties to the show, and threw them on stage. Oh wait, no! There was one show we played were I threw up on stage and it triggered a chain reaction in the audience. . It was kind of awkward. Fortunately it was the last song of the show. But for a minute there it was projectile vomit everywhere.

That wasn’t your worst show?
No, It was a great show. For some reason people were into it.

Your album is the “Good Feeling Music of Dent May and his Magificent Ukulele.” What is one of your pet peeves?
Squeaky windshield wipers. They are the worst.

Have you seen Jake Shimabukuro play?
No, not yet. I’ve heard of him but I haven’t heard his music.

You guys should go on the road together and have a ukulele tour.
We should!

What are you looking forward to doing in Los Angeles?
Oh man, tough to say. I have a lot of friends in L.A. who I haven't seen in awhile. I went to NYU film school and a lot of them moved out there when they graduated. I’m very excited about seeing them.

Finish this sentence: If you’re in Mississippi you simply must…
Give me a call. We’ll party!

Be sure to catch Dent May and His Magnificent Ukulele on Thursday when be plays the Troubadour with A.C. Newman of the New Pornographers.