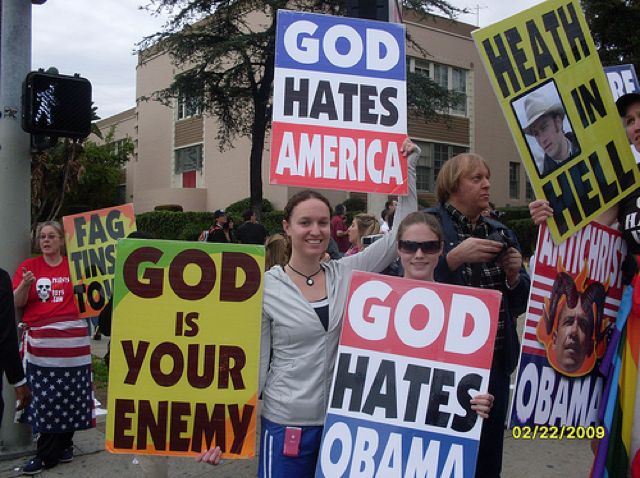 "For those who saw the signs of hatred as our cars drove in tonight, I think that it is a good time for those who voted for the ban against gay marriage to sit and reflect and anticipate their great shame and the shame in their grandchildren's eyes if they continue that way of support," Sean Penn said in his acceptance speech for actor in a leading role last night at the Oscars. "We've got to have equal rights for everyone."

Those protesters he's referring to were seen by thousands as they passed by Sunset and Highland. It was a small group from the infamous Kansas-based Westboro Baptist Church, who own hateful web domains like www.godhatesfags.com. "We're here to warn you," a young woman told an LAist Featured Photos contributor on video. "I'm picketing the Oscars because the entertainment industry in this country is just one of the pieces, one of the institutions, that you're using to promote sin and filth and rebellion against the commendants and standards of God."

Meanwhile, backstage in a room full of reporters, Penn was asked what he would say if had a chance to talk to those protesters. "I'd tell them to turn in their hate card and find their better self, you know. I think that these are largely taught limitations and ignorances," he explained. "It's very sad in a way, because it's a demonstration of such emotional cowardice to be so afraid to be extending the same rights to a fellow man as you would want for yourself."

Penn's also talked about President Obama on gay rights, Harvey Milk and Mickey Rourke. Below is the full transcript...

Backstage at the Oscars with Sean Penn, Questions asked by various media outlets.

Q. Congratulations. I asked you a couple questions at the SAG Awards. You were talking about that, actually, you remember Harvey Milk, being old enough to remember him. Can you talk about, now that you've won the highest honor in Hollywood for this award, what it means to you to be able to bring his story and how important you feel his story is? What Harvey Milk was and what he represented.

A. You know, that means a lot to myself and to everybody involved, not only in the movie, but to anybody who believes in equal rights for human beings, it's pretty simple. And, certainly, what I mentioned from the stage earlier tonight, to see this culture of ignorance, and that breeds this kind of hateful expression, that these people have their signs outside essentially telling you that you're less than human. There's nothing more important than the themes of this movie as well as addressing things that are simply, you know, entertaining, I think. But there's nothing more important, and so being part of something like that is a privilege. And when you see something like what you saw outside today, it enhances that.

Q. Hi, Sean. Congratulations. You certainly deserve the award. I wanted to ask you, what did you say to those people who were holding those signs tonight, if you happen to go back past Sunset and Highland and see some of those signs and what they're saying?

A. I'd tell them to turn in their hate card and find their better self, you know. I think that these are largely taught limitations and ignorances, this kind of thing, and it's a really it's very sad in a way, because it's a demonstration of such emotional cowardice to be so afraid to be extending the same rights to a fellow man as you would want for yourself. I would ask them not to tempt those of us who see something more deeply than they are looking at it, as angry as they tend to be in a void.

Q. Tonight, in your acceptance speech, you mentioned President Barack Obama. I'm wondering what you would like to see the president do in relation to gay rights.

A. We know his public position as far as the specific issue of gay marriage has not been, let's say, officially supportive of that. I would like to believe that that's a political stand right now and not necessarily a future one or a felt one. I don't think that he or that any of us, and in particular our president, will long be able to take that position. It's inevitable that this is not because it's not a human luxury; these are human needs and they will be gotten. So he's going to have to he'll adapt. Right now I think it's more focused on, more interested in what we're going to do to tell him that we will support him in making those kinds of taking those kinds of initiatives. He's got people dying right now en masse, and people are desperately poor en masse, and I think those two emergencies need to be taken care of, without him taking too much time about the details of how he approached civil rights. But the day is going to come and it's going to come quickly.

A. I've been making movies for over 25 years and I can't speak for his consistent sense of me. He's an excellent bridge burner at times, but we've had for the most part a very close friendship. And he's somebody that I alternatively looked up to and advised and directed, I've wanted to work with and admired and quite literally had me, almost throughout THE WRESTLER, weeping. He's one of our most talented actors, he always was. I don't really think of it as comebacks are funny, and we talk about it with him, but everyone in this room has to make a comeback every day. Life is tough. And I think what's sensational about him is always what's been sensational about him; he's one of the great poetic talents in acting that we have.

Q. Australia. One of the signs of the protesters out there said, "Heath is in hell." Can you speak to that?
A. I don't know what that means.

Q. I think it references that he's gone and that the Academy Heath's in hell.

A. I think if we get used to dismissing these kind of comments rather than commenting on them, we'll be better off. It's meaningless jibberish. We've got to focus on people who are clear enough about what they mean.

Q. The words "passionate" and "commitment" are words that your friends and everyone around you associate you with. Do you know where that came from, and do you wish it on your children? Is that something that you try to instill in them?

A. Well, I think we all try to we hope for that in our children, and by whatever means you attempt to instill it in them. I can't accuse myself of having those qualities, although I appreciate what they said, and I certainly strive for that.