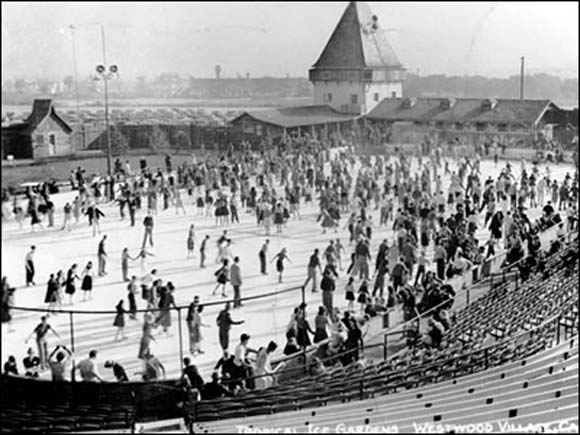 Every winter, many Angelenos get excited by the novelty of heading downtown to Pershing Square and lacing up their ice skates and gliding along (or falling down on) the rink set up during the holiday season. If you spend enough time in Los Angeles eventually you'll hear someone say their weekend plans include "going to the snow," as if cold weather was a destination. And though we may crank up our heat on some chilly wintry nights, we still wear flip flops on our feet with scarves around our necks around here. So it's actually quite fitting to know that once upon a time, when UCLA's roots were barely sinking into the grounds of a blossoming area called Westwood, there was an outdoor skating rink open year-round for pros and amateurs alike.

In October of 1938, Angelenos were anxiously awaiting the opening of what was billed as "one of the biggest sport and amusement enterprises in Los Angeles annals," (Huge). Three hundred men were employed to work through the night to build the Tropical Ice Gardens, which would seat 10,000 spectators and accommodate 2000 ice skaters on its outdoor rink. The endeavor aimed to "bring to Westwood Village a corner of St. Moritz, with buildings creating an exact replica of an Alpine village, set in surroundings of stately palm trees and hibiscus," ("Work"). 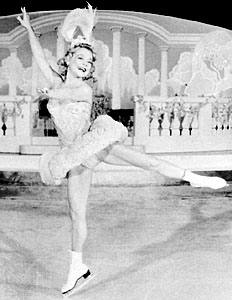 Hollywood made a star out of Norway's Sonja Henie
One mere month later the city was ready for the rink's impending opening gala festivities, and were looking forward to seeing European skating stars, like Swiss teen skating sisters Helga and Inge Brandt, who delighted crowds with their light-and-shadow routines and a routine using real fencing foils, hit the ice in Southern California. Ice skating was tremendously popular as both a spectator and participatory sport in America at the time. Skating rinks offered fun for people of all ages, skating clubs brought enthusiasts together for lessons and activities, and Hollywood turned Norwegian ice champion Sonja Henie into a movie star after she won multiple titles in 1936.

In fact, not long after the Tropical Ice Gardens opened in November 1938, LA Times columnist Lee Shippey wrote in his witty "Lee Side O' L.A." offering for December 13th, about ice skating's status as "a world-wide fad." He did not miss a beat, remarking how "amusing" and anachronistic it was to take to the ice at at time when "the thermometer climbed to the all-time December high of 92," in recent days as onlookers—many of whom had never seen ice skating in person before—watched in awe from the stands. He called the ice shows that were touring the country and headed to Westwood's new showplace "poetry of motion," noting that "a ballet on ice is a thing of supernatural beauty." But when the pro show end, it's time for the real fun, when the public takes their often unruly feet to the ice. At a time in LA's history when the "beaches have been crowded by day" and the "ice-skating rinks by night," Shippey reflected on just how profoundly ice skating culture was affecting Los Angeles:

[Tropical Gardens] in Westwood isn't the only ice-skating rink. There are several of them. And skating teachers are bobbing up all over town. Whatever Hollywood does is done for show and movie people aren't going to get out on the ice and make ludicrous exhibitions of themselves. They get some private lessons before appearing in public. I have heard that several movie celebrities are planning to have refrigeration equipment installed in their swimming pools, so that they can use them as rinks all winter. Southern California has taken to the sport so enthusiastically that some of the rinks are open afternoons as well as evenings, and also in the morning on Saturdays and Sundays.

The sport has had a lasting impact on life in Los Angeles, actually, although ice skating rinks are fewer and far between these days. "The All Year Figure Skating Club was organized in 1939 by a small group of enthusiastic skaters under the leadership of Mrs. Ann Rork Getty at the Tropical Ice Gardens in Westwood Village. The club developed rapidly along with the popularity of the sport and held both Junior and Senior sessions," explains the official AYFSC website. That's right, it's still around today! 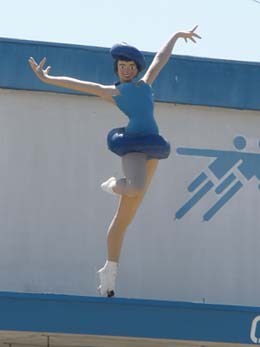 The Culver City Ice Arena is one of the only skating rinks open year-round today in Los Angeles. Photo by julie wilson world/LAist Featured Photos
The AYFSC's legacy is an important part of the sport's story in Los Angeles. As the Tropical Ice Gardens continued to attract top-notch performances by skating icons such as Henie, and the duo of Frick & Frack, people loved to take part in figure skating. Their website explains the genesis of skating clubs in Los Angeles:

Ah, yes, Sonja Henie once again. There are conflicting reports about Henie's actual affiliation with the rink. One fan's website remarks:

Sometime in the 1940s, Sonja Henie, who was making films at Twentieth Century-Fox and touring in her ice show the rest of the year, acquired the arena and renamed it Sonja Henie's Ice Palace. It is uncertain whether she actually used the arena for her shows, which were based in Chicago and in 1938 had begun playing at Polar Palace when in Los Angeles, but it is likely

But historian Kevin Roderick disagrees: "Topical Ice Gardens appeared in so many films starring Norwegian Olympic champion Sonja Henie that people referred to it as her rink, though she never actually owned it," he writes in his book Wilshire Boulevard. The AYFSC also notes the Henie connection, and alludes to the Tropical Ice Gardens' demise: "The [AYFSC] club suffered a severe setback in 1949, when the Westwood rink — by this time known as the Sonja Henie Ice Palace — was torn down to accommodate expansion of UCLA."

Some attribute the Tropical Ice Palace's closing to fire; flames had damaged the building in May 1939, but the rink had re-opened shortly after. Perhaps because of the mechanics required to keep the ice firm and cold outdoors in our climate, fires were fairly routine happenings at ice rinks in Southern California. The Ice Palaces website claims that it was a fire that ultimately claimed the rink and preempted the tear-down plans: "[F]ire struck again, this time after the arena was closed and scheduled for demolition, and the place collapsed May 5, 1950." Regardless of how it went down, the Tropical Ice Gardens, home to just over a decade of professional and amateur figure skating, local hockey matches, Hollywood stars, and lots of fun, was no more.

Henie's fame did eventually wane, but the ice star's life was cut short in 1969 in a plane crash. Skating's humorous Frick of Frick & Frack lived a full life—starting his day off with a meal of grapefruit laced with booze—and continued to perform into the late 1970s, and died in April of 2008 at the age of 92. Although these skating stars, and many ice palaces, are long gone, the sport remains popular, an its Olympians often enjoy a great deal of celebrity, albeit of a different nature than Henie's. 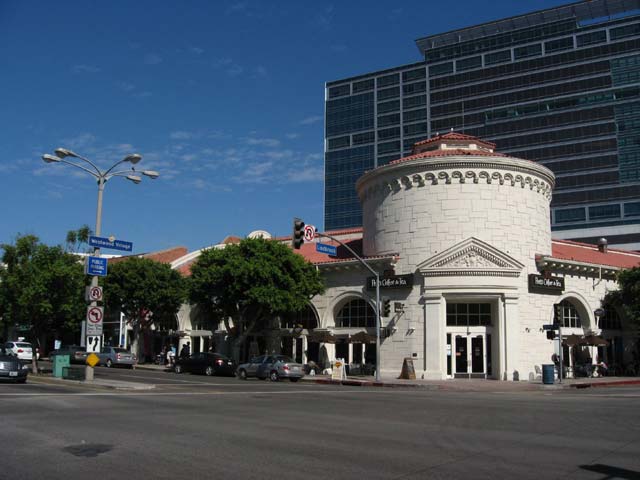 Some have long hoped to see Westwood Village recapture the spirit of its early days, like Jim Heimann wrote in 1999:

The Westwood of the past should serve as a model for what a future Westwood can be. As a mixed-use shopping district, it offered a range of amenities to students, business people and nearby communities. You could grab a malted at Tom Crumplar’s, shop for the latest clothing at a variety of upscale stores such as Bullock’s and Desmond’s, bowl a few frames at the Westwood Bowling Center, pick up groceries at one of five village markets, see your broker, get your hair cut, go to the cleaners, have your shoes repaired, stop for gas at one of the seven local gas stations, see a movie, browse the latest best sellers at Campbell’s bookstore and even go ice skating year round at the outdoor Tropical Ice Gardens. All this within a few square blocks.

Only time will tell if that will happen in the neighborhood chiefly associated with UCLA.

In 1992, LA Times columnist Jack Smith wrote in response to a recent publication that lauded the top 100 things about living in Los Angeles. He sensed the list was the result of the negative press the city had received following the riots, and while he applauded most of the one hundred items, and the spirit of the list, he felt something was amiss:

Evidently meant to dispel the gloom over the riots, it lists 100 Southern California places or institutions that are, indeed, great, among them the County Museum of Art, the Philharmonic Orchestra, the Dodgers, the Mark Taper Forum, the Dorothy Chandler Pavilion, the Hollywood Bowl and the Wiltern Theater (the last two being miraculous survivors). Of course, not even a list of 100 could include all the wonders of this place. Whenever I compose a list of entities, good or bad, some readers are either outraged or at least disappointed that I did not include something else. Though the bank's list is a feast, I'm sure some readers will complain that it has left out important things. Indeed, I can think of several institutions or places that might have been included.


Smith goes on to list several places his readers then, or now, may not have ever heard of, offering them as suggested omissions: "How about the Tropical Ice Gardens near UCLA? Here we have a year-round outdoor ice skating rink surrounded by an Alpine village, with seating for 8,000," he included in his own list. "What's that you say? All those places are gone? Obliterated? Kaput? Well, yes, of course. That's the point. Los Angeles is the temporary city. Its landmarks are here today, gone tomorrow."

Perhaps that's why we should work hard to remember them.