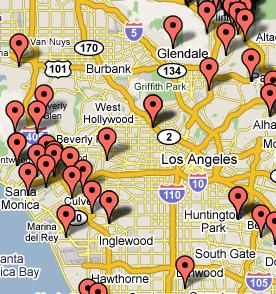 For people concerned that the Obama era would be a time of reconciliation and national good feeling, during which old and painful divisions would be healed and the impetus for political-tourrette's outbursts would be gravely diminished, Proposition 8 has been the gift that keeps on giving. Since passing last November, the battle between the supporters of equal rights and the supporters of building a magic time machine back to the 19th century has been epic. First, opponents of the measure expressed their displeasure with a series of protests (with predictable and expected diminishing returns). Prop 8 supporters responded with a crybaby hissy fit. Boycotts of businesses connected to Prop 8's passage followed, along with even more crybaby hissy fits. The EW-Ghey faction even moved to displace the Grinch and Scrooge as December's worst people by filing a Christmas season motion to annul the Same Sex marriages made before Prop 8 passed.

As we said, it's been epic.

The latest round is the Tolkienian shitstorm that has kicked up over Eightmaps.com, an invasive little enterprise that reveals, city by city and neighborhood by neighborhood, just who put their money where their gay-rights-hating mouths were and gave said money to the yes on Prop 8 Campaign. What Eightmaps does is combine publicly available donor disclosure information (which you can find here), with the subtle brilliance of Google Maps, to create an easy to use map pinpointing the location of practically everyone who donated in support of Proposition 8. Thanks to the requirements of said Donor disclosure, a surprising amount of information is provided - Full name, job title, employer and the amount of donation are all displayed in glorious technicolor. While it paints an interesting portrait of conservative California (that, among other things, indicates large number of retirees among the Prop 8ers1), it also sparked considerable debate about civic responsibility and the right to privacy.

Since launching a little over a month ago, Eightmaps has been covered extensively by papers such the SF Gate, the LA Times, and most recently and shallowly, by the New York Times. What these articles have in common is a tendency to feature Prop 8 supporters screaming 'til they're blue in the face that their civil liberties have been seriously violated, without also bothering to substantially examine the preceding violation of civil rights that occurred with the passage prop 82. What they also have in common is the lack of any comment by Eightmaps' creator. She or He has controversally chosen to remain anonymous, even refusing all requests to be interviewed. (Full Disclosure - I attempted to contact him or her for this article, with no reply.) An interesting and perhaps intentional irony, given the amount of information her or his website makes accessible.

That discrepancy has at the heart of considerable argument over the site- Blogger "Mike" of Note On Virginia (an excellent, if somewhat annoyingly libertarian place to go for news and commentary on issues facing the GBLT community) has announced that he managed to determine who created Eightmaps, though so far he's sitting on the information. What he isn't sitting on is a detailed and compelling argument from a Pro-Gay Rights perspective that the site's creator should, excuse the pun, out him or herself and go public. Similarly, Gawker's Vallywag recently called Eightmaps' creator a "big chicken" for similar reasons.

Though it hurts this staunch opponent of Prop 8 to admit, Eightmaps' deriders miiiight have a point - there are extremely compelling arguments in favor of protecting at least the domestic privacy of political actors. Let's take a trip down memory lane and recall the last time someone's private and public lives caused this much discussion - John Edwards' recent total political cereer meltdown, due to the revelation that he had carried on a clandestine, off again-on again affair with one of the lamest people in the country while his wife was recovering, then suffering, from cancer. 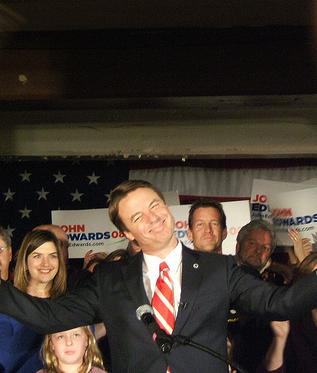 Democrats and liberals in general (including myself) were pissed the hell off about this. Edwards had run for President as a serious candidate, knowing full well that he had basically committed the only sin our corrupt media and the dumb dumb stupid heads in the heartland actually care about3. Obviously, it was gross irresponsibility because had he won the nomination, the affair would have come out and he'd have lost the election. Imagine McCain in the White House right now.

The fact that Edwards is a bad husband, (Who cheats on a sick wife, then forces her to endure mountains of humiliation because you decided to run for public office knowing that the affair might come out?) doesn't matter. What matters is that he was a terrible candidate, which is unrelated entirely to his affair. Is what went on it really any of our business? Does it matter in any substantial way? Shouldn't one's private life remain private, barring any actual criminal activity, which again didn't actually occur? Perhaps the same could be said for people who support prop 8, who are perfectly within their legal rights to lack anything resembling decency and compassion for their fellow citizens, then voting (and donating) accordingly.

Then again, perhaps Edwards is the wrong comparison - Let's consider Elliott Spitzer instead, a man who made his name prosecuting prostitution rings as a DA, then used that tough on ew-sex-ew stance to catapult himself to the New York Governor's mansion, where he proceeded to spend thousands of dollars on... prostitutes. Putting aside the fact that he's clearly an awful person, he also committed actual crimes, and the suggestion that his love of high priced hookers was in any way a "private matter" is shut-the-fuck-up laughable on the face of it.

As has been argued by supporters of Eightmaps all over the internets, people who donated to support Prop 8 have inserted themselves rather intimately into the private lives of thousands of their Fellow Californians. They also made their private information public in full accordance with California's donor disclosure laws, something they must surely have been aware of at the time. Mature adults must surely recognize that if you support something enough to actually donate money to the cause, it's cowardly to later seek to obscure that support. Furthermore, if you support something that happens to directly affect thousands or even millions of people who happen to disagree with you, they're likely to get a mite bit impolte about it. But isn't that just desserts?

After all, conservatives have, during the last 20 years, made a particularly refined art form out of locating the private information for anyone who dares speak out about causes they oppose, and have used that information to harass them beyond anything reasonable. It's also worth nothing, as the Marriage Equality Now blog very excellently reminds us in their defense of the anonymity of Eightmaps' creator, that the expressed fears that conservatives have of gay reprisals sounds more like a certain river in Egypt4 than anything resembling reality - aside from a very pointless act of vandalism, there has been literally no violence or destruction aimed at Prop 8 supporters by those in favor of gay rights, despite the constant and steady stream of lies and misinformation that has come to define the quality of character of those opposed to equal marriage rights. By contrast, in many parts of the country, even admitting that you're gay can be a life threatening action - this is something that no conservative Christian has ever experienced in the long history of this nation, unless you take them at their word that fierce condemnation and strident disagreement are equivalent to gay bashing or lynching.

Which we most certainly do not.

Is, however, it enough to point out that the worst supporters of Prop 8 can expect is the end of a few friendships and maaaaaybe someone tearing up the shrubbery in their lawn? Does the fact that they face far fewer risks than the people they voted to discriminate against make them any less deserving of the same basic respect for their privacy that those of us who aren't horrible bigots have argued is due the GLBT community? Ultimately, we're forced to conclude the answer is, well, not that simple. We support wholeheartedly California's donor disclosure law, and furthermore, we believe that anyone willing to put real money down ought at very least be willing to do so publicly. But we also should condemn anything remotely resembling mob justice.

So we propose a preemptive compromise: The second that credible and verifiable violence against Prop 8 supporters is reported, we will condemn it wholeheartedly, and demand that justice and the rule of law be allowed to run their course. Until then, we ask only two things:

1) That Prop 8 supporters stop lying about threats made against them.
2) That they at least consider the irony of their position.

In the meantime, we also suggest that anti-prop 8ers limit their legal attempts to shame those who voted in favor of Prop 8 to boycotts of businesses. Since that is precisely what has happened, we'll simply hope it continues, and let LAist eaders make up their own minds about the rightness or wrongness of Eightmaps.

Ultimately, the question we ask this: if Eightmap's creator5 wishes to remain anonymous, isn't it the least they can do to issue a public statement, make themselves available to interview, in short, explain their position and why their anonymity is not a contradiction? If they do not, surely they must be aware that it's only a matter of time before someone with time on their hands and a grudge figures out who they are and takes the option out of their hands.

We would like, therefore, to extend a public invitation to talk to LAist at his or her earliest convenience. As for myself, I intend to be as public as possible. Just as soon as I legally change my name to John. Q. incognito.

1) Just ask grandma and granpa how they feel about teh ghey. Go on. I'm sure they'll be quite reasonable.
2) Indeed, the New York Times article shamefully draws false equivalence between terrorism and boycotts, as if people are obligated to give money to people who hate them, lest they be accused of UnAmerican acitivites. I almost wrote this piece as a screed against that kind of lazy reporting.
3) Yeah, I said it. The Good Authentic Real Americans in the heartland don't give a damn if you lie about weapons of mass destruction, let a city drown, ruin the economy and let 911 happen. They don't even care if you torture people. But God forbid you have an unauthorized orgasm. That's even worse than being Moslem!
4) Get it? GET IT? I kill me! (/alf.)
5) Of course, controversy aside, one must be honest about the elegance of a site like Eightmaps - it's really one of those ideas so apparently self-evident that it seems instantly familiar, as though it was just always there, proving once again that it takes a genius to take the previously nonexistent and render it completely obvious, an instant cliche.

Photo "it's all about me" by Tony The Misfit Via Flickr