TV Junkie: We Ask Amy Sedaris About Her Cameo On Tonight's 'The Closer' on TNT 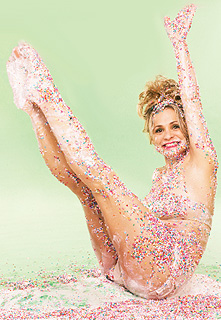 We love Amy Sedaris and we love the fact that we can see her on something other than just a few minutes with David Letterman - this time as a somewhat wacky psychic on "The Closer" tonight @ 9:00pm on TNT.

We jumped at the chance to ask Amy Sedaris a few questions:

LAist: So you've done a lot of work with Comedy Central, and you've done this piece with TNT for "The Closer." Can you tell us about some differences you may have noticed between working for these cable-based programs versus something on one of the larger networks?

Amy Sedaris: Well, the last larger network thing I did was when I did the Jack Spade show. And they were really loose and fun and that set, so that was my big experience working for a network show.

And then working on TNT and you know Comedy Central, they kind have the same vibe, like you didn't really get a sense of a lot of grownups were around, but I'm sure they were around. But I didn't feel any kind of weird pressure or shadows on the set. You know everyone got along and the director was up for input as well as you know the crew and the cast. So there's a lot of communication going on. It just seemed like a very - like everyone trusted each other. So it was all a good experience, but there wasn't a major difference.

So what we've seen is you've been the harbinger or the leader in the cupcake craze and crafts. What else are you going to be the pioneer of?

Amy Sedaris: The pioneer of - well, I'm working on a craft book right now. And I haven't made cupcakes since the summer. I might - I'm thinking about getting out of the cupcake business just because they're everywhere and they're very - they can get pricey to make just for the butter, and the eggs, and the milk, and all that. And then you get cockroaches. And I'm in the process of moving. So I might just not want to get into that and bring cockroaches into my new place.

Listen to the interview here:

8:00pm Top Gear BBC America - The guys do their best to avoid an angry mob of locals pelt them with rocks.

8:00pm Chuck NBC - Chuck and Sarah must pose as a happily married couple living in the suburbs, where they meet some interesting characters

9:00pm One Way Out Discovery - John Goodwin is Buried Alive and then has to escape an Ice Trap

9:00pm The Closer TNT - Brenda prepares for her upcoming wedding; a cell phone is found containing text messages that point to a possible homicide

10:00pm Man vs. Wild Discovery - Bear Grylls enters the forest of Transylvania, where he encounters steep ravines, an underground water system and an adult brown bear.