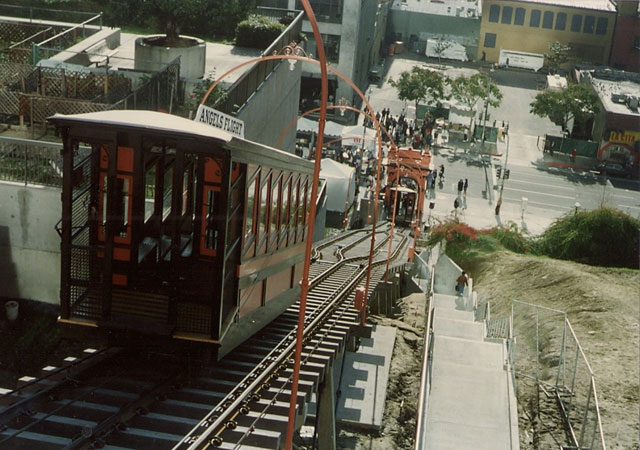 It's been a long time coming and downtowners eagerly are awaiting the reopening of Angels Flight, the funicular railway between Hill Street in the Historic Core to the California Plaza atop Bunker Hill. In fact, people are so eager that last week the Downtown News wrote an editorial saying "it is time for local government officials to insert themselves into the process so the funicular can reopen," citing a 2001 tragedy that killed one and left the "shortest railway in the world" stagnant as they rebuilt, financed and began to get ready for a reopening, which should be soon.

In response to the downtown paper, Dennis R. Luna and John H. Welborne from the Angels Flight Railway Foundation fought back and had their side of the story reprinted. The government is already "intimately involved" and there is no need to bring in the city or Mero, they say. "Angels Flight will reopen soon, but only after experts certify it is safe for the unique funicular to do so and the [California Public Utilities Commission] concurs. Involving additional non-expert elected officials or city or county agencies (including the heavy-rail and light-rail experts at Metro) is not the way to clear hurdles and speed the reopening."

In fact, they say that when city hall got involved with Angels Flight in 1962, it was open for seven years, then closed until 1996 when the foundation took it over and ran it "16 hours every day, seven days every week and 365 days every year. Over 800,000 passenger trips were clocked each year, for a total of 4 million passenger trips in the five years following the 1996 reopening." And all while keeping the fare at a quarter per ride (they secured outside money, too), which they hope to keep the same when it opens this year.