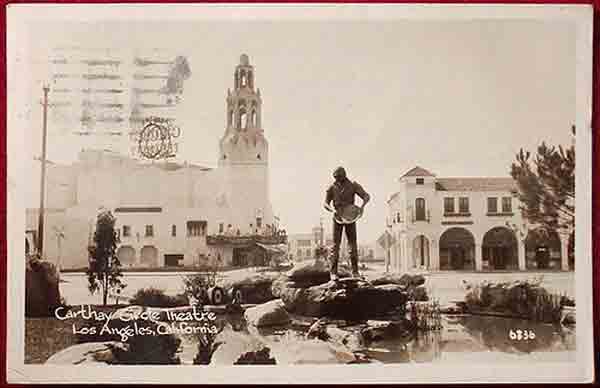 In 1849, a flood of people came to California to cash in on the gold rush. They spent years bent over rivers, sifting for gold. Sometimes they made a fortune. Others, they came away empty handed. In this town, perseverance can really pay. Or sometimes it just gets you even more screwed. The “Dan the Miner” Statue has stood in Carthay Square since 1925 and has certainly seen both sides of this virtue. “The Pioneer” by Henry Lion stands about seven feet tall and weighs 512 pounds. He was designed as part of a fountain that stood in Carthay Center, and like many other works of art in the area, he celebrates the explorers who settled the west. He holds a pan (some think it looks like a deep dish pizza) from which water once flowed to a pool at his feet.

Though presumably Dan is still looking for gold, he no longer has a pond to search. Now he stands, somewhat inexplicably on a grassy median at San Vicente between McCarthay Vista and Del Valle Drive. He is shaded by a large tree, and easy to miss if you’re driving passed.

Program, Dan the Miner, Statue, Fountain, Carthay Circle
Perhaps some people thought no one would notice if Dan just up and vanished. About a year ago, during a rash of statue robberies (most of them were in front yards) spawned by rising copper prices, a couple of guys decided that Dan was fair game. But people in close knit Carthay Circle noticed right away - and not just because the thieves had driven up onto the lawn beside him. The perpetrators were called in by a suspicious scrap yard owner. Dan had been bisected by his captors (who were later picked up by police) and lay, diminished, in a corner.

Last month, Dan was reinstalled on his corner, to witness traffic, delight children and listen to homeless guys panhandle. He is now firmly attached to the granite under his fake boulder. With any luck, Dan the Miner will continue to persevere for years to come.

Program photo from the inauguration of "The Pioneer" used with permission of vokoban.